The Toronto Raptors were riding a wave of positive energy heading into the Eastern Conference Finals. They defeated the Miami Heat in seven games and were in their first conference finals in team history. They would go down in history as the best Raptors team in their history. But all that joy turned into concern when they saw who they were facing next. The Cleveland Cavaliers were riding a wave of their own. The Cavaliers arrived in the Eastern Conference Finals unscathed at a perfect 8-0 record. And with their perfect record in the playoffs, the Cavs were clicking on all cylinders. In looking at this matchup, the Cavs were favored by many. And essentially, there were not many that gave the Raptors a chance to win a game or two let alone this series. The Cavaliers were supposed to roll in this series as well. And in the first game, they came out and showed why many thought they would dominate in this one. The Cavaliers came out and dominated the Raptors in Game 1 115-84. And just like that, people are already getting ready to crown the Cavaliers the Eastern Conference champions.

But before everyone can go crowning the Cavaliers, there are still games that have to be played. And with that, there is a chance the Raptors can come out and get Game 2. Of course adjustments need to be made, but it is entirely possible that they could come out and win Game 2. One huge adjustment the Raptors will need to make is to provide some resistance to the rim. The Cavaliers have been shooting the basketball great during the playoffs from three-point range. So in seeing that, the gameplan had to be to run the Cavs off the three-point line. The Raptors succeeded in doing that much, going 7-20 from the three-point line. But in doing so, the Raptors gave the Cavaliers an escort to the rim all night long. Everytime we looked up, the Cavaliers were dunking on an uncontested drive to the basket. And the Raptors were nowhere near in each of the dunks. In Game 2, the Raptors can run the Cavaliers off the three-point line again, but they have to provide more resistance at the rim. That will require the Raptors rotating better defensively. Of course the Cavs may still be able to get good shots, but at least Toronto won’t give up point-blank shots at will.

Offensively, only one Raptor really had a good game. DeMar Derozan had 18 points and shot the basketball well. But the Raptors were so porous defensively that it did not matter. If they make their improvements defensively, then the game could be closer. But offensively, they do have to make some adjustments. One of those adjustments needs to be their isolation offense. The Raptors mostly use DeMar Derozan and Kyle Lowry in isolation situations. And when they do so, that means the movement in their offense stagnates and shots are more contested. For the Raptors to defeat the Cavs in Game 2, they need ball movement. That will make the Cavaliers have to work more defensively and will undoubtedly give the Raptors some better looks at the basket.  But even with better looks at the basket, one guy has to show up that was dominated in Game 1. His name is Kyle Lowry. The veteran point guard was 4/14 for eight points while his counterpart, Cavs guard Kyrie Irvin, had 27 points on 11/17 shooting. The Raptors need their leader to step up on the big stage instead of shrinking on it like he did in Game 1. Irving is not known as a great defender, so Lowry should attack him more. The more he attacks him, the more the Cavs will have to help defensively. And that could create open shots for guys like DeMarre Carroll and Patrick Patterson.

The Raptors are not the best matchup for the Cavaliers and we all know that. But the blowout in Game 1 was not indicative of what the Raptors really are. In Game 2, expect them to come out and play better defensively. And if they are able to make some adjustments offensively, then maybe they make game more competitive than the first one. If not, then we could be watching a repeat of Game 1 and that will have everyone searching their televisions for something else more entertaining to watch. The choice is up to you Toronto. 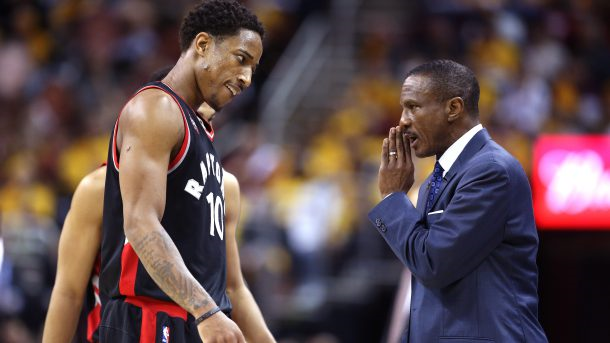