Toronto Is Lurking In The Shadows

The West in the NBA is what a lot of people talk about. They speak on the competitiveness and the deep pool of talent the NBA's Western Conference has. When talking about the Eastern Conference, that talk definitely changes. The talk in the East is about two teams primarily. One of those team is the Boston Celtics. After their smoking start with new point guard Kyrie Irving, there have been plenty fans of basketball and fans of the Celtics that have given them a chance yet again to come ot of the Eastern Conference this season. The Celtics have become a story but there is one team that many feel they still have not caught. The Cleveland Cavaliers started off slow but they have picked up steam now, only sitting one and a half games behind the Celtics for first place in the conference. The talk of these two teams meeting in the Eastern Conference Finals and deciding the East has been dominating majority of the Eastern Conference basketball talk. While everyone is caught up with them, it seems like there is one team that has been forgotten.

The Toronto Raptors were supposed to have their best shot at the Cavaliers last year, as they returned pretty much everyone. Unfortunately for them, that plan never came into fruition as they were eliminated earlier than they planned. From there, many wondered what the next step for this team was. Would they start a slow rebuild while letting free agents Kyle Lowry and Serge Ibaka go or would they sign them up again for another run at the Eastern Conference? Well, Toronto brought both of them back, but we all wondered what would be different this time around. So far, there is a big difference offensively that some are recognizing. The Raptors were a team that was iso-dominant offensively last season. The ball would be in the hands of either Kyle Lowry or DeMar Derozan and these two would either create a shot or pass the basketball after not being able to create a shot. The result of that offense worked enough for them in the regular season, but in the postseason, it was not all that pretty. Those tough shots they hit during the regular season were not going in the postseason and that resulted in a stagnant offense that could not produce in the postseason at all. The Raptors seem to have paid attention to that stagnant offense last season and now the ball seems to be moving freely. The result is the Raptors have been getting easier shots and are among the top teams in the NBA in terms of assists per game.

The offense has made some changes to get more efficient, but the defense has kept up their end of the bargain. The Raptors are again a tough defensive team, ranking in the Top 10 in the NBA. While it seems like the same old thing for Toronto, they are actually doing a few things differently based on mentalities and personnel. When it come to the mentality, one guy that seems to have changed in that aspect is Kyle Lowry. The veteran point guard was a pest defensively when he first entered the NBA. He hounded opposing point guards despite being undersized. As his career went on, he got better offensively but seemed to have lost the defensive intensity. This season, with the de-emphasis on the individualized basketball play, he has taken the time to add the defensive intensity back. That pressure at the point guard position (if he is able to keep that up) will be something that helps this team potentially when playoff time comes. Along with Lowry picking up the intensity defensively, the Raptors are actually more flexible defensively. They can go big with their lineups and they can also go small with Norman Powell out there and Serge Ibaka at the center position. That type of defensive versatility can benefit the Raptors as they move forward and get ready to make a playoff run.

The Toronto Raptors are a team that people seem to have forgotten about in the Eastern Conference at this point. While people are forgetting about them, they are actually right there with the Celtics and Cavs in the Eastern Conference. As time goes on, we shall see if they are able to stay where they are, but as of right now, they are a team that has to be looked at as a darkhorse contender. 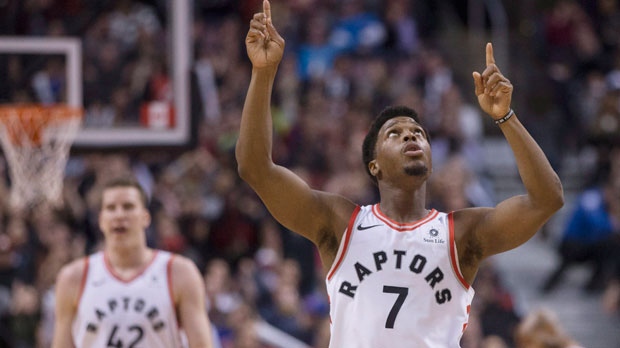