The Toronto Raptors Fight Back

The Cleveland Cavaliers were in control after two games. The Toronto Raptors had been physically manhandled to begin this series. And after those two drubbings, all hope seemed to be lost for them amongst NBA fans. But the good thing for them is they were going home after the first two games. Some wondered how they would come out. Would they enter Game 3 pressing and miss their shots? Or would they come out and play like the team that entered the playoffs as the Eastern Conference's second seed? Well, it seems like the Raptors decided it was time to come to play. They came out with energy and determination as they stuck it to the Cavs early and often. And in a reversal of fortunes, the Cavaliers were playing catchup the entire game. The Raptors won Game 3 99-84 against the Cavaliers in front of a raucous crowd in Toronto. They were able to strike back instead of taking blows. And going into Game 4, many can say the Raptors have a chance to win because of their Game 3 performance. It seemed like they were a total different team than what showed up in Cleveland. And the adjustments that were made by the Raptors were definitely noticeable.

The Raptors were essentially escorting Cleveland to the basket in Games 1 and 2. Anything Cleveland wanted to do was happening as they assaulted the rim for over 100 points combined in the paint through the first two games. But in Game 3, it looked like the lane was closed for business. Part of that was due to better help defense from the perimeter and weakside defenders. The active hands along with the quick rotations deterred the Cavs from penetrating all the way to the rim and finishing. And that led to them going back to shooting three's like they did in the Atlanta series, but they were not hitting them this time. But the Raptors did not get all their issues solved in one day. They had some breakdowns where the Cavs got to the basket. But that was when center Bismack Biyombo stepped in to deter the Cavs at the rim. He had 26 rebounds Saturday night filling in for Jonas Valanciunas again. He was the man on the boards. But it was his defense of the rim throughout the game that gave the Cavaliers fits. Three blocks at the rim stand out the most from Biyombo. His chasedown block from behind early in the game set the tone defensively. The block where he got every big of Kyrie Irving's shot stemmed the tide on any type of comeback. And lastly, the  block on Tristian Thompson at the rim in the third quarter helped sustain the Raptors' lead. All three of these plays had a message, even though no words were said.

But not only were the Raptors more active defensively, but offensively as well. The Raptors have been known as an isolation team all season long. And in the playoffs, that has been no different. But unfortunately for the Raptors, their isolation basketball offensively has let to some really bad performances. And in the first two games of this series, the Raptors were playing right into the Cavaliers' hands with the limited amount of passing they were doing. But in Game 3, it seemed like the Raptors collectively decompressed and came out bent on attacking the rim. Players like Kyle Lowry, DeMar Derozan and Cory Joseph were attacking the rim more than they had in Games 1 and 2. And as a result of that, they put pressure on the Cavaliers' defense and caused them to breakdown and gave the Raptors layups as well as wide-open three-pointers. That led to their best performance behind the three-point line in this game (the Raptors shot a series-high 38.7% from the three-point line while hitting 12 three-pointers). That also led to more players being involved in the game, making Cleveland's defensive job even tougher.

The Raptors played very well and showed up when they needed to the most. Going into Game 4, Toronto will likely face stiffer competition as the Cavaliers will be bent on avenging their loss. And you can definitely not expect them to camp out at the three-point line like they did in Game 3. For the Raptors, they must continue to press the issue and be the aggressor. Their playoff lives depend on it. 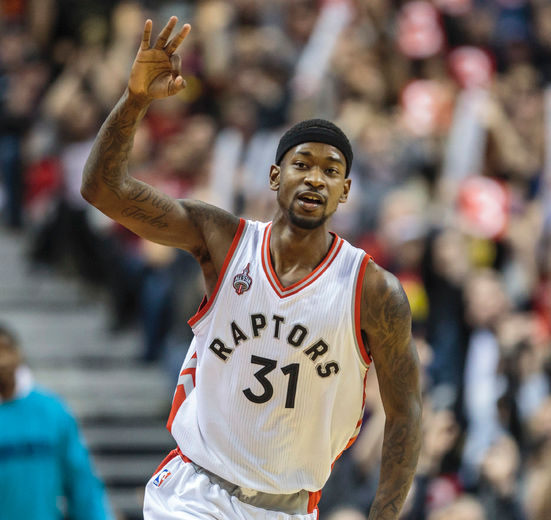