More Than A Game Is At Stake In Toronto

The Toronto Raptors and the Miami Heat have traded blows back and forth all series long. And after six games, they are all tied up at three games apiece, needing a Game 7 to decide the winner. The winning team in Game 7 will take on the number one seed in the East, the Cleveland Cavaliers. There have been some good performances in this series by Heat guard Dwyane Wade. They have been so consistently good that many have looked at Wade and thought “there is no way he is 34 years old.” On the other side of the coin, the Raptors’ star guards have been inconsistent as usual when it comes to this year’s playoffs. DeMar Derozan and Kyle Lowry were tearing it up during the regular season and have not hit the broad side of a barn in the playoffs for the most part. But whether their performances have been good or bad could all be erased in one game. The Raptors host this one by virtue of their second-place regular season finish. But that does not mean as much as many would think because Miami has won in Toronto already this series. The results of this last game could mean a few things for both teams going forward.

For Toronto, the Raptors have fought hard and had the best regular season in franchise history. And going into the postseason, many expected them to make it further than they had before. Some even had them listed as the biggest challenger to the Cleveland Cavaliers. But alas, the playoffs have unfolded and the Raptors have struggled to make it happen consistently. Derozan and Lowry have not made it happen on a regular basis and role players have stepped in and made up for their unexplainable bad shooting. But even with the bad play of the Raptors big guns, the team still has an opportunity to make history and appear in their first conference finals game. If they win this one, then some of the ugly and inconsistent play will be forgotten for a second, as they would be advancing to the next round. But if they are to lose, then there could be some ramifications that reverberate throughout the team. At this point, everyone knows that DeMar Derozan is a free agent this offseason. There has been plenty of talk about him recently and where he could land next season. The latest rumor has him already committing to leaving Toronto for the Los Angeles Lakers. If they lose this series, then that could mean he is out the door, never to return again. That would set the Raptors back on what they have built so far. The logical solution to replace him in the starting lineup would be to put reserve guard Terrance Ross in his spot in the starting lineup and replace Ross’ spot in the rotation with either a draft pick or a veteran. But even in doing that, the Raptors would be losing one of their best weapons. Of course, if they win this series and go on to lose versus the Cavaliers, then Derozan would really have something to think about. Does he stay to try and make it happen in Toronto if they advance and lose to Cleveland or does he leave to make it happen somewhere else?

But not only could there be questions in Toronto, but in Miami as well. The Heat were thought by many to be a contender in the East to start the year. With a healthy Chris Bosh, Dwyane Wade and the cast of veterans they had, the Heat had all the parts that could cause some issues for the Cavaliers. But unfortunately for the Heat, Bosh suffered from the same ailment that took his season last year. And although they added late-season free agent Joe Johnson, the Heat were not thought to make it to this level. But thanks to some superhuman play by Dwyane Wade, they have made it this far and have a chance to make the Eastern Conference finals. Of course they could make the Eastern Conference Finals and set up the battle between good friends LeBron James and Dwyane Wade. But what happens if they lose Game 7 in Toronto? The Heat only have a few players under contract next season, namely Goran Dragic. But players like Wade, Luol Deng, Joe Johnson and Hassan Whiteside will be free agents. And add to that, the health of Chris Bosh will be a question mark as well. With these big decisions out there, questions will arise as to who comes back and who does not. One guy to expect back should they lose is Wade. He is the longest tenured Miami Heat player in team history and you would expect the team and Wade to agree to a new deal. After that, the future looks a little dicey. Whiteside is a beast on the defensive end of the court and has grown offensively this season. But with his immaturity, will the Heat back up the Brinks truck to keep him in South Beach or let him walk? That decision could be seriously dependent on the health of Chris Bosh, in what could be the most pivotal offseason in his career. As far as Deng and Joe Johnson, both have been in the game for a while now and could be looking for that one last payday, whether it be in Miami or somewhere else. The Heat, just like the Raptors, have some questions that could get accelerated if they lose. But if they win, these questions could actually solve themselves more than anything.

The Heat and Raptors are not only in a battle for their seasons, but in a battle to not change. Both teams will have some decisions to make and some players that will be making some decisions themselves. Of course one game does not make this decision for them all, but it will sure make an impact on the decision they all have to make. But for now, Game 7 is all that matters. May the best team win. 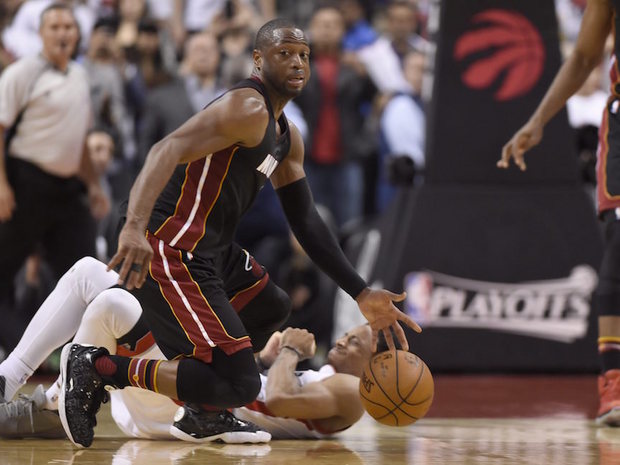