The San Antonio Spurs dominated the Oklahoma City Thunder in the first game of the NBA’s Western Conference semifinals. So in the second game, the Thunder had to answer. If they went down by two games to the Spurs, then you may as well say the season is over. The Thunder came out playing well in Game 2 while the Spurs could not hit the broad side of a barn. They were missing point-blank layups and everything during that disastrous first 6 minutes. But even with that, they were still in the game. The lone guy that was focused and hitting on all cylinders early was LaMarcus Aldridge. If it weren’t for his efforts, the Spurs would have lost the game worse honestly. But like usual, the Spurs worked themselves back into the game. And after a foul by Thunder forward Serge Ibaka on Aldridge shooting a three-pointer, the Spurs were able to bring themselves within one point after Aldridge hit all three free throws. The Thunder called timeout and got the basketball with 18 seconds left and had to take the basketball out. And this is where all the madness happened. Thunder guard Dion Waiters was taking the ball out and appears to elbow Manu Ginobili as he is trying to get the ball inbounds. The refs missed that one, but the Spurs still get the basketball and had a chance to win the game after stealing the inbounds pass. But they missed their shot to win the game and the Thunder survived. Many Spurs fans are irate about the ending of the game, but the Spurs got away with some things as well.

There is no denying that Manu Ginobili was hit by Waiters while Waiters was taking the ball out of bounds. The referees, for their part, said that they have never seen a play like Waiters did. But looking back at it, they said that they should have called an offensive foul. And in doing so, the Spurs would have got the basketball right then and there. That all may be true, but there is something else the referees missed in that sequence of plays. Manu Ginobili was trying to make a play happened and put pressure on Waiters and he did a good job of doing so. But he also got a little overzealous in doing so as well. Ginobili actually stepped on the out of bounds line when he was pressuring the basketball: 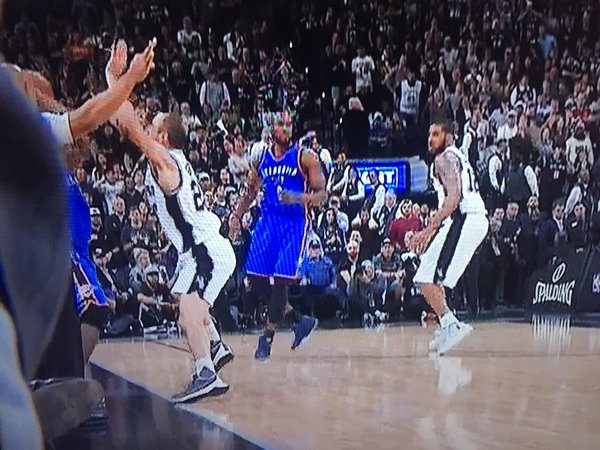 Just in case some don’t believe he was out of bounds in the picture above, here is a close up version of the picture: 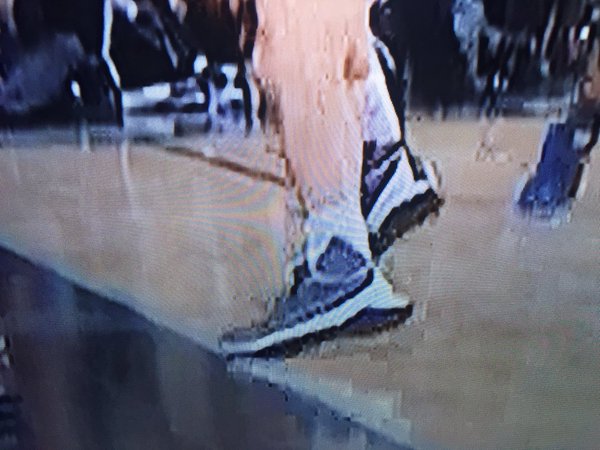 Ginobili stepping out of bounds actually happened before Waiters elbowed him, so that would have resulted in a delay of game call against the Spurs. And per NBA rule 12, section II, if a defender crosses or breaks the plane of the boundary line prior to the ball being released or throw in, the team actually should be accessed a technical foul. Here is the actual rule right here. If the rule was called correctly, the play in question with Waiters never happens and the Thunder get a free throw and the ball back again. But instead, it was not called and the big fuss is about the play that was not called against Waiters.

Waiters could not find anyone open in that fracas and ended up throwing the ball away, giving the Spurs a chance to win the game. One reason he probably could not find anyone open is because one of his teammates was being held. Russell Westbrook was trying to get open during that inbounds play and was running around like crazy to do so. But one particular reason he probably could not get open is because he was being held. Spurs defender Kawhi Leonard actually had him by the jersey: 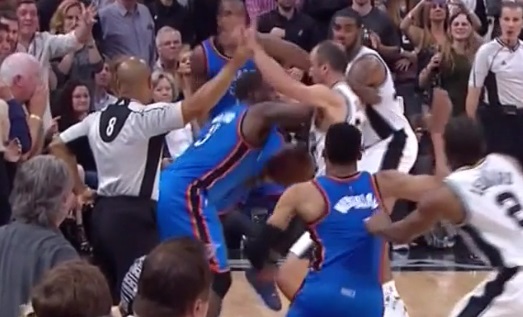 If this was called correctly, then Westbrook would be shooting free throws right then and there. That could have potentially put the lead up to three points for the Thunder and forced the Spurs to make a three to tie the game instead of having a chance to win the game at the end. As the picture suggests, Waiters was within his motion of hitting Ginobili, but had not connected yet. So we definitely would not be talking about the elbow that Waiters laid on Ginobili, which Manu should have been called for a violation anyway. All in all, there were plenty calls that could have gone against the Spurs and everyone is focused on the one that did not go for them.

The Spurs head to Oklahoma City to go face the Thunder tied up at one game apiece. But no one will be giving credit where credit is due for the Thunder. They gave the Spurs their second loss at home this season. But many will be focused on the last eighteen seconds and how crazy they were. Many feel the Spurs were wronged, but if the game was called to the letter of the law, the Spurs had more violations during this time than the Thunder did. And yet the Spurs still had a chance to win and missed the shot at doing so. All in all, Rasheed Wallace was ahead of his time when he said “The Ball don’t lie.” It sure did not lie when the Spurs missed that chance to win the game at the end.