The Golden State Warriors were picked by many to win the title this season. With the acquisition of Kevin Durant from Oklahoma City this summer, they threw their hat into the "super team" talk that surrounded the Miami Heat when LeBron James and Chris Bosh joined Dwyane Wade in Miami back in the summer of 2010. Just like that team, success followed. Along with that success though, came expectations. Some wondered if they would reach the 73 wins they did the previous season while others wondered aloud if this mixture would falter. Well, they did not get it going off the bat, but they got stronger and stronger as the season went along and became the team that many believed they would be. As of right now, there are many looking forward to this team meeting up with the Cleveland Cavaliers in the NBA Finals. Of course when they get there, they will need all hands on deck. But as of right now, there is one player that has not really got it going like he did last season in the playoffs. That players name: Klay Thompson.

The talented shooting guard has gotten better and better over his career. He has shot the basketball with assassin-like accuracy for most of his career, crippling defenses in his wake. Last year in the playoffs, he was their most consistent player offensively. Thompson averaged 24.3 points per game while shooting 44.4% from the field and 42.4% from three-point range. You would think that he would be able to get things a little easier this time around with Durant out there with him. Apparently, he has lost that magic touch a little. Thompson, who is a solid defender, has still done well on that end and has not had his shooting issues affect him. With all that being said, he has not been his usual self offensively in the playoffs. His points per game was expected to drop some due to the addition of Kevin Durant, but his shooting has fallen off along with less opportunities. Klay is now averaging eight less points a game this playoffs while shooting 40.7% from the field and 36.2% from three-point range. Now that may not seem that bad to the average person watching him play, but when these numbers include a stretch of play where he has shot the ball sporadically over the last nine games of the playoffs, there seems to be some reason for concern there. There is no doubt that Klay is a talented player and the Warriors can win games without his contribution. But for them to win a title, he will definitely need to step his game up more than what he is doing now offensively.

So what is the issue? We know Klay can shoot the basketball, but what else is he doing offensively. In the last couple of seasons, he began to add more driving to his game, attacking the rim when given the opportunity. Going into this season, you would expect that he would keep that type of play up and with more weapons, it would be a little easier. Well, it seems like he has reverted back to being the limited shooter he once was when he arrived in the NBA. Now that would be fine if he was a player that was limited in his ability, but we all know that Klay is capable of so much more. Since his jump shot has not been falling as efficiently as it usually does, why not take the ball to the basket. He has only averaged two free throws a game in the last two games because he somehow refuses to attack his defender and get to the rim. By making that sudden change and getting to the rim, maybe he gets to the free throw line and gets his shooting eye back going. In turn, Klay getting it going consistently again makes this team that much harder to defend. Other than Klay needing to be more aggressive, the talented perimeter player also needs to stop thinking so much sometimes. It seems at times that he is thinking the game instead of playing it on the offensive end. That results in some turnovers and inexplicable plays by him. If he just relaxes and reacts, Klay will be just find, but for some reason, he just cannot relax and react offensively. That tenseness seems to be hampering his offensive game.

The Warriors are the favorites still by many to win the title. They have two former MVPs, a marksman and a defensive utility weapon in Draymond Green. That all seems good right now, but the marksman if off right now and they need him. The Warriors still conceivably make the NBA Finals with him struggling, but in order to beat Cleveland, they will need him to play well on both ends of the court. After today's Game 1, you have to wonder when or if he will break out of the funk he is in. For the title chances of the Warriors, they better hope it is sooner rather than later. 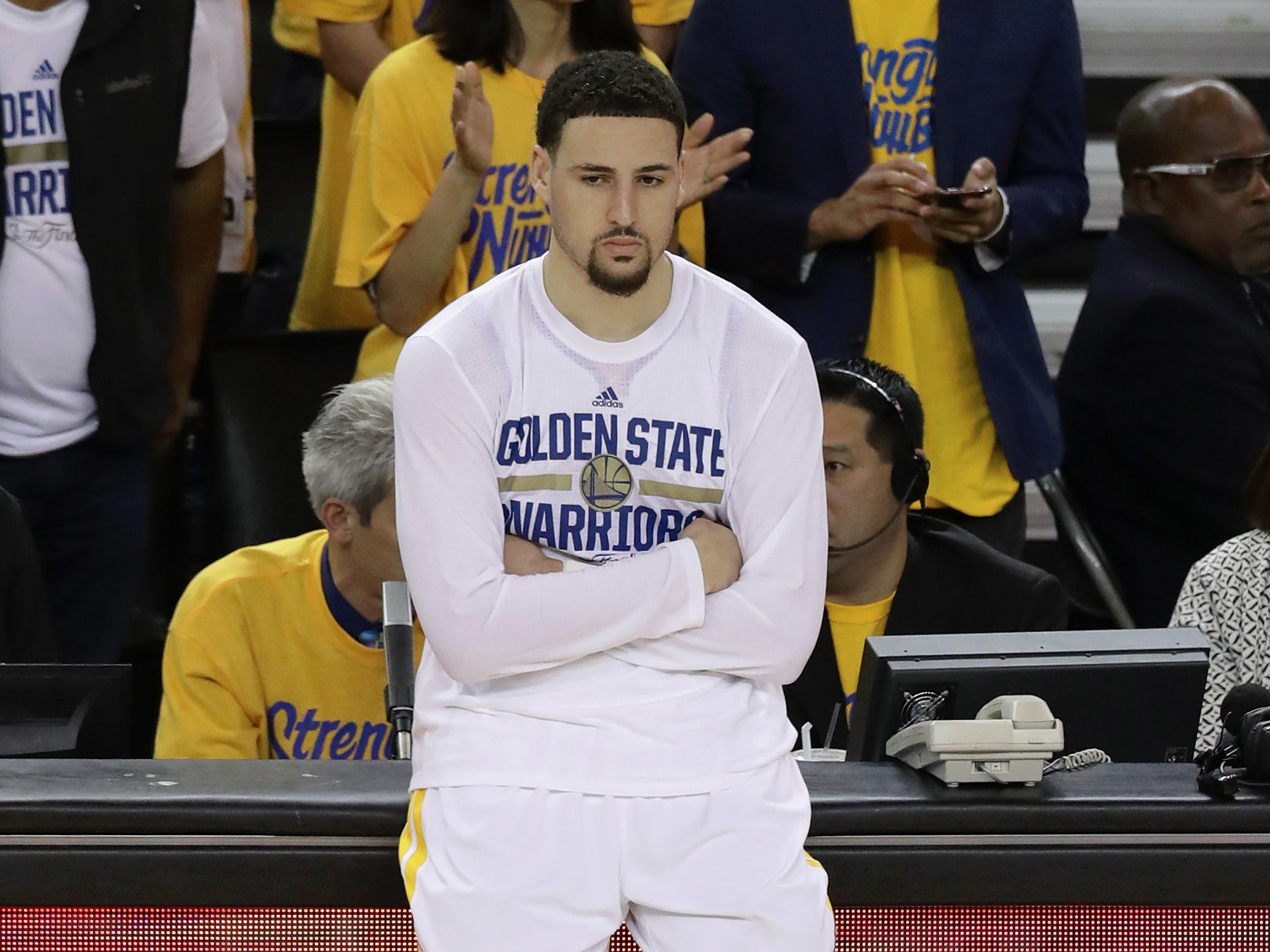