Is NBA Summer League Even Worth Watching?

The NBA season seems to never have some time off. The NBA Finals are a little over a month over and folks are already talking about how teams are looking for next year. And with that being said, rookies have already been added to their teams in a sense. The NBA Summer League wrapped up recently in Las Vegas, with the Chicago Bulls winning the tournament at the conclusion of summer league. Rookies along with players trying to make the NBA were on display for teams and organizations, trying to ensure either their role on the roster or a roster spot on the team. Many made some great impressions while others came out and were ok to non-existent. But does the NBA Summer League really tell us much?

In the NBA, folks complain about the defense that is being played. They say that it is non-existent at times and that too many get easy drives to the basket. If that is the case, then many must hate the NBA Summer League. Time after time, there were uncontested drives that happened. And not only were the drives uncontested, most of those drives took place from the three-point line. Honestly, that type of effort defensively does not mean much to professional scouts and coaches. They want to see a guy that is hungry on the court and wants to make plays on both ends. And to take it a step further, the NBA really does not encourage the players to play great defense without fouling because they give the players ten fouls in the game. If you want the players to get better defensively and adjust to the game, they have to learn the rules and how to play defense without fouling. Because in some of these games, it seems like plenty of these players know they have ten fouls and give up a ton of fouls just because they did not feel like getting in position.

But the bad play is not only on the defensive end, but the offensive end as well. Understandably, a lot of the players out there are trying to make a roster. And in doing so, they are doing all they can to make it happen. In doing so, some players began to get outside of what they can do. Instead of being a shooter and a defender, there are some that come out and try to act like they are trying to put up 50 points in a variety of ways. And after a few turnovers and blown layups, that player finds his way to the bench. If players really want to make it from the summer league to the roster, the best way to do so is to do what it takes to win. That could be setting a screen, boxing out, making a good outlet pass and finishing inside when given the opportunity. Those types of things are what impress coaches and can ensure either a roster spot or a spot in the rotation. Trying to come out and be the all-time shooter will get you a permanent seat in the minor leauges of basketball and overseas for the rest of your career.

The NBA has done some things that have made them better. But the entertainment value of the NBA Summer League game is one that can go a few different ways. There were some spectacular moments that happen out there in Orlando, Utah and Las Vegas. And rookies like Thon Maker and Ben Simmons looked good. But the summer league has some work to do from the players and the NBA's point of view. Players are there to make teams, but they are doing too much sometimes. The NBA is giving them plenty of fouls to "work" on defense while encouraging them to foul more. Honestly, drop the fouls down to six like a normal NBA game and then you may see some changes from that end of the floor. And as far as the offense, teams need to demand more from their players there. The players will respond if you demand what you feel is right. 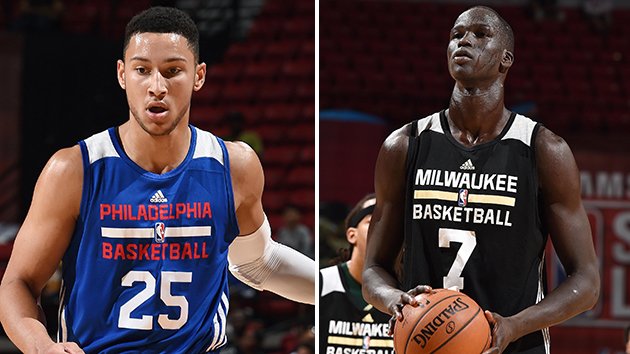