The Oklahoma City Thunder came into this series versus the Spurs as the underdog. There were many that did not give them a chance to win, instead predicting what game they would lose in. And there was also the predictions of what they would need to have a chance. Of course much of their chance in this one was hinged on star players Russell Westbrook and Kevin Durant. And to the credit of both, they have showed up this series. Westbrook is averaging 25 points and 10 assists per game and Kevin Durant is averaging 27 points and 6 rebounds a game. And with these two stars leading the way, the Thunder have a 3-2 series lead and the opportunity to close out this series versus the Spurs in Game 6. But other than the stars, there has to be a role player or two step up. There always seems to be that one player that steps up whenever teams need it. And for the Thunder, it has been Steven Adams. He has been solid for the Thunder all season. And in this series, he has had a huge impact.

Defensively, it was thought that Serge Ibaka would be able to handle Spurs forward LaMarcus Aldridge. Well, Aldridge had been torching Ibaka to start the series, doing any and everything he wanted. So, the Thunder made a small adjustment that has had a huge impact. When Aldridge got the basketball in the post some times, he would turn towards the baseline and attempt to score the basket. Well, the Thunder were doing their homework and decided to change things up a little on how they defended him. When Aldridge was still being guarded by Ibaka, they had Serge lead him towards the baseline as best he could. When that happened, they knew that Steven Adams would be on the opposite side due to the sets that San Antonio runs. So what they did was send Adams over to cut off the baseline and make things more difficult for Aldridge to score once he pounded the ball a few times and then would go baseline. Another huge thing that happened is the Thunder decided to let Adams defend Aldridge a little more during the games. The physical play of Adams along with his quick feet bothered Aldridge because he could not finish inside like he was over Ibaka. The combination of those two adjustments involving Adams has worked wonders in slowing down Aldridge. In the first two games with Ibaka guarding Aldridge with no help, LaMarcus went 33 of 41 averaging 39.5 points per game. With the defensive adjustments that Oklahoma City made involving Adams, Aldridge’s production was still solid, but he was not as efficient. He has hit only 22 of his last 60 shots in the last three games and he has averaged only 21.3 points per game during that stretch. That adjustment by having Adams more around Aldridge and allowing him to guard Aldridge sometimes has been huge in slowing down the Spurs offense.

But not only has Adams’ impact been felt on the defensive end, but the offensive end as well. Plenty of times this season, many wondered why Adams started over Enes Kanter. The Thunder paid Kanter big money this offseason to keep him around. Offensively, he is their best big man, but defensively he could be taken advantage of. But in this series, the production of Adams has been directly linked to the success of the Thunder. In two losses in this series versus the Spurs, Adams has not reached double-figures, averaging 6.5 points per game. But in the three wins of the Thunder in this series, Adams has been used on the offensive end of the court, averaging 13.3 points per game. That nearly seven point difference is huge for the Thunder, as it shows that someone else has been involved other than Westbrook and Durant. And it also gives them another person that can finish inside. Many times in this series, you can see Adams finishing inside off a Westbrook pass. And not only was he finishing the play, but he was doing so with either hand, which is something no one really thought he could do in there. But given an opportunity by Westbrook and Durant to make plays, he has done so and repaid their trust. And as a result, he has made Aldridge and Tim Duncan work more defensively. With Adams scoring and other players being involved, it has taken some of the pressure off Westbrook and Durant to do all the scoring for the Thunder. And his impact has also made the Thunder a harder team to defend. No longer can you just assume that Westbrook and Durant are going up with the shot. You have to account for them dropping it off to the big man inside.

Adams’ impact has been great for the Thunder and has helped them make it to the verge of the NBA’s Western Conference Finals. Of course the Thunder still have to finish off the Spurs and that will not be an easy task. But if Adams comes out with the same attitude and impact in Game 6, it could be closing time for the San Antonio Spurs. Although he is not thought of as a guy you have to account for with the Thunder, he has definitely been the guy that has helped change the fortune of this Oklahoma City team. 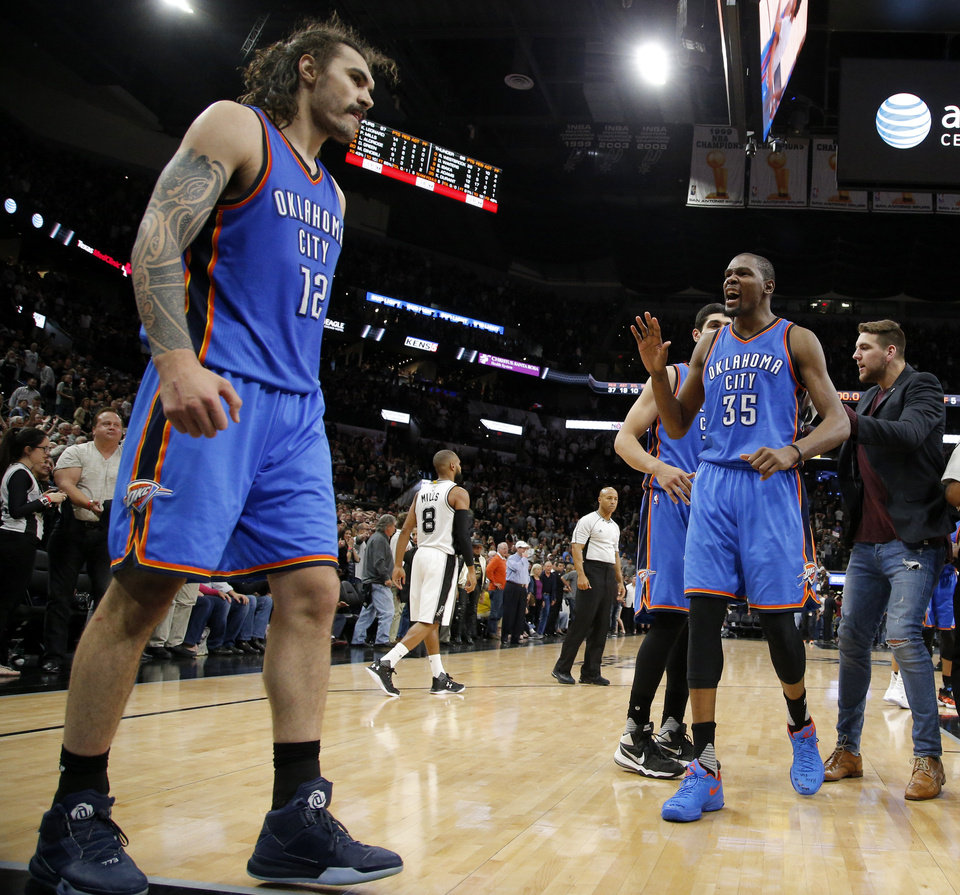