No Excuses For Steph Curry In This Series

The Golden State Warriors are in unfamiliar territory. They had been down 2-1 before and fought back a couple times. But after the thrashing that they received in Oklahoma City Tuesday night, they are now down 3-1 and in a do-or-die situation. It will be interesting to see how the Warriors comes out in a strange situation for them. But of course, they will come out and fight. After all, their season is on the line. But along with their season on the line, there has been some more talk about Steph Curry. The star point guard and first unanimous MVP in the NBA has been sputtering this series versus Russell Westbrook. The Thunder have tried to rough him up this series, being physical with him. And not only have they been physical with him, but they have taken away some of the air space he has had to get off shots. And in the paint, the Thunder have contested every shot he has put up, making it difficult to get off a shot. Essentially, the most dangerous scorers in the NBA has been neutralized by a ferocious Thunder defense. So naturally, the excuses began to flow from social media for him.

If you have been watching the playoffs, you know that Steph has had a rough go of it with injuries. His biggest injury was when he hurt his knee slipping on a wet spot on the court in Game 4 versus the Houston Rockets. He would go on to miss the rest of that series and only came back when his team needed him, facing the threat of a tied series versus the Portland Trailblazers in Game 4. And after struggling in the first three quarters, Curry went off and ended up with 40 points. And in that game, he declared himself back after carrying his team to the win. At that point, many began to speak on his incredible play considering he came back from a tough injury. And as time went on, plenty began to forget about his injury. But all of a sudden, the team and Curry struggles, then people can remember his injury? Some media outlets are talking about Curry is playing at 70% at best. And to his credit, Curry has not spoken or blamed the injury for his performance. But it seems like there are people trying to give him an excuse as to why he isn't performing well and why his team is down.

The reality is that some would rather blame the results of this series so far on Steph being injured rather than calling it what it is.  The truth is Russell Westbrook is dominating Curry this series and he deserves every bit of credit for that. If you compare their numbers, Westbrook has the advantage in every category. Westbrook is scoring more than Curry (27.3 points per game to 24.3 points per game). But along with the scoring, Westbrook is getting his teammates involved, like a point guard is supposed to do. The explosive point guard is averaging 11.8 assists per game against the vaunted Warriors defense. While Westbrook is excelling at passing the ball, the Warriors dynamic point guard is averaging only 4.5 assists per game while turning the ball over on average 4.3 times per game. The pressure defense combined with lazy and sometimes silly passes have made for some bad turnovers in big situations for the Warriors. And not only is the scoring is assist numbers telling, but so if the field goal percentages of both. After struggling in the first two games shooting the basketball, Westbrook has found his range, shooting the basketball at a 47.8% clip. Steph, on the other hand, has not shot the ball great in three of the four games this series. And he shot his worst in Game 4, when he only hit six of his twenty shots, including two of ten from three-point range. The numbers spell it out and those who have watched the games can see it. Westbrook has been the best point guard on the floor and it isn't even close.

The difference between injured and hurt is something that not many understand. When you are injured, you sit out and are not able to play. But when you are hurt and you step between those lines on the field or court, then you are deemed healthy enough to play. And at that point, there is no excuses that will be made for your performance. If you play poorly, then that is all on you and not to be blamed on a hurt you had coming in. Curry is a talented player, but his hurt was something that he has not played well through up to this point. And just like he is giving no excuses for his play, some media should not be trying to build in an excuse for how he is playing and give Westbrook some credit for having one heck of a series against the MVP. 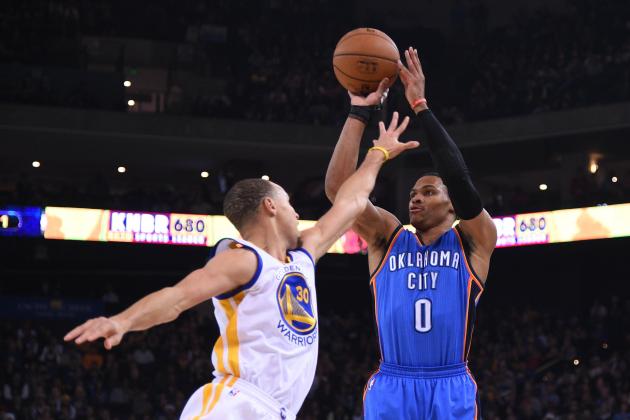