The Cleveland Cavaliers had some momentum heading into Game 4. They came out in Game 3 like everyone expected them to. They defended well and came out and hit Golden State in the mouth early and often. And with that, the pressure was on for both Cleveland and Golden State in Game 4. If Cleveland won, the series would be tied heading back to Oakland. If Golden State won, the series would be over in a lot of people's eyes. Along with the pressure being on Golden State, there was also plenty wondering where were the Splash Brothers. Despite the 2-1 lead in the series, Steph Curry and Klay Thompson had been unusually inconsistent. Klay had not scored in the fourth quarter all series long along with having some inexplicable decisions (giving up a layup to shoot a three in Game 3 comes to mind). And along with Klay, Curry was definitely off. The unanimous MVP was getting played physical by the Cavaliers and he was also making some inexplicable decisions. Jalen Rose of ESPN said before Game 4 that the Warriors needed at least 52 combined points from Curry and Thompson to make it happen. Well, Curry and Thompson combined for 63 points on their way to gaining ultimate control of the series heading back to Oakland. And now the Warriors have a chance to close out the series at home in Game 5.

Curry's struggles have been well-documented throughout this series. He has been bumped, held, grabbed and roughed up throughout the series and that has seemed to throw him a little off kilter. Through three games in this series, he was averaging only 16 points per game. Now for an MVP to dip to that amount of points is something that is totally unexpected. But you have to give credit to Cleveland's defense up to that point. Well, when Curry was needed the most, he stepped up and made it happen. Curry was more like his usual self, attacking the basket for a dish or a finish. He may not have hit all those shots or gotten the assist on every one of his penetrations, but he did gain back the aggressiveness he had lacked for most of the series. And once he saw the ball go through the hoop a time or two, that's when he began to gain form once again. Curry only hit eleven shots, but seven of those were three-pointers, including two a dagger or two in the fourth quarter. He combated the physical play with being more decisive in his movements. And that helped him have his best game in the series with 38 points. And despite a few times where he was loose with the basketball, Curry was definitely more tight when handling the ball, having six assists to only three turnovers (first time all series Curry has had a two-to-one assist-to-turnover ratio in a game).

The reigning MVP played well, but so did his partner in crime, Klay Thompson. In the previous three games, Thompson had averaged 12 points per game. For a guy as lethal as Klay can be, that was unacceptable for a guy of his talents. It just seemed that he was taking a lot of  difficult long-range shots that really were not within the flow of the offense at all. And as a result, the production was not there. Essentially, the others were picking up the slack where he and Curry were struggling. And those that have picked up the slack had helped carry the team to a 2-1 series lead up to that point. But eventually, Klay had to show up in this series. And in Game 4, he definitely did but in a different way. In the previous three games, Thompson had only shot a total of five free throws. Now some will say that was due to the way the game was being called, but Klay was not really attacking the rim as much in the first three games at all. In Game 4, Klay came out attacking the rim more. And because of that, he took more free throws and made more free throws than he has in the entire series. And like Curry, Klay saw the ball go through the basket and that helped him have his best game this series with 25 points. And for good measure, four of his seven shots made were three-pointers.

The Warriors have held it down for Klay and Steph for most of the series. But when they needed their two best players the most, both stepped up and made it happen. Now the Warriors are in prime position to win back-to-back titles while the Cavaliers are quickly seeing their championship hopes come crashing down. Curry and Thompson are the most dangerous backcourt in the NBA and they just showed that again to the world Friday night. 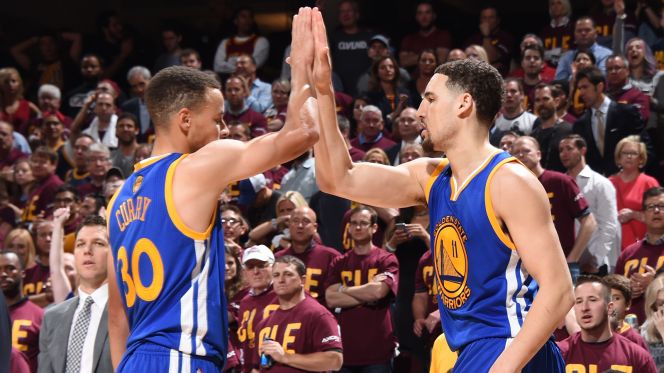