It’s Time For Serge Ibaka To Step It Up

The Oklahoma City Thunder were the third best team in the Western Conference this year. And going into the second round of the NBA playoffs, many looked at them as a warmup for the Spurs. Many had the Thunder falling to the Spurs in the Western Conference semifinals, which would have started the Kevin Durant speculation as he is scheduled to be a free agent this offseason. And after Game 1 when the Spurs dominated the Thunder by 32, the noise regarding Durant began to get louder about him leaving. But the Thunder ignored the noise, going on to win four of the next five games and making the Spurs look like an older, slower team. Durant and Westbrook were special in this series, averaging 29 points a game and 25 points a game respectively. And reserve guard Dion Waiters, reserve big man Enes Kanter and starting center Steven Adams were good in support of Durant and Westbrook. Heading into next series, plenty are excited to see what the Thunder can do against the most exciting team in the NBA, the Golden State Warriors. Plenty don’t see them winning versus the Warriors, just like many did not see them beating the Spurs. But for them to do so, they need one man to step it up.

During the season, everyone talked about the duo of Durant and Westbrook being lethal. But while everyone has talked the Thunder’s dynamic duo, they forgot about the third option of this team, or lack thereof. All season long, there has been a rotating cast of people try to fill that role, but no one fill it on a permanent basis. But in looking at the Thunder team, there is one guy that is getting paid like a third option and many considered him to be the third option going into the season. His name is Serge Ibaka. Despite the success the Thunder have had, the 26 year old power forward has regressed the last three years offensively, from 15 points per game in 2013-2014 to 12.6 points per game this season. When the Thunder decided to sign him and trade James Harden, that decision met some criticism, as the Thunder were trading away one of their best scoring options. And ever since that trade, the Thunder have not been the same team. Ibaka has expanded his offensive game and that is commendable. But he is also become a guy that lives and dies with his jump shot. When his jump shot is on, he makes an impact, bringing opposing big men away from the basket. When he is off, he seems to be the great invisible man out there on the court. That kind of production is something that does not help when you need a consistent third scorer. And that has reflected in his production in the playoffs. Serge has had some good games, but he has had some games where he has disappeared as well.

The Thunder have another crack at the Warriors coming up in the Western Conference Finals and they will need Ibaka to be big. And by being big, Ibaka needs to get inside more than he has. Rarely do we see him go inside and use his size against someone. He has grown his offensive game, but he has seemingly forgot that he is a power forward and not a stretch forward. It’s fine that he can shoot the basketball, but he has to have that be a complement to his game and not all of his game. Against the Warriors, they will need him to be a factor in the paint. If he works from inside out, then he will have the kind of impact that will be needed for them to pull the upset. If he does not, then he could be riding the bench a little bit more while Enes Kanter takes his playing time. And if Kanter is able to make more of an impact in the game than Ibaka can, then you could see Serge’s role in this series get smaller and smaller as the games go by. Of course we will probably see Kevin Durant play the power forward position some in this series, but that will not be the way the Thunder can beat the Warriors. By using their size to their advantage along with their stars being stars is the only way to get it done. The reality is that the Thunder cannot play like the Warriors and expect to win. They have to play their game. And Ibaka could play a big role in how that goes.

The third option for the Thunder will be in question for this series versus the Warriors. Ibaka could be it, but it is up to him if he can do so. He has to be a force the Warriors have to defend. If he is not, then he makes the job for the Thunder harder in this series. And if they lose and he is not that big a factor, then this could be his last season in Oklahoma City. They paid Kanter a lot of money and he most definitely will not be a bench player for the rest of his career there. So while everyone is looking at Durant and where he may land, Ibaka could be on his way out. The focus will not be on him as much as Durant, but he has to play a solid role in this series. 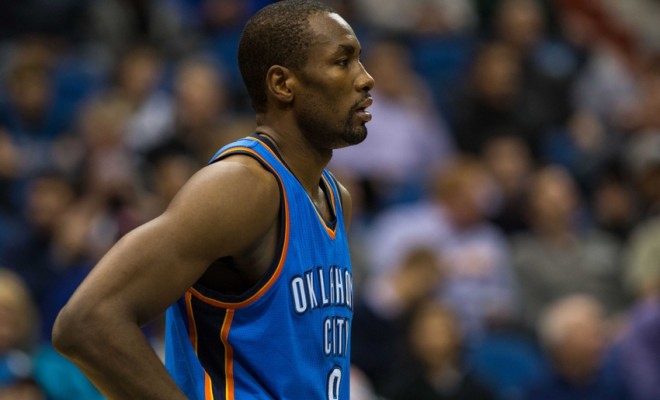