What To Expect From Russell Westbrook In OKC This Season

The Oklahoma City Thunder were unexpectedly in the NBA's Western Conference Finals last year. And with that run, some thought that might get superstar small forward Kevin Durant to stick with them. Durant was a free agent this summer and that weighed heavily on the minds of not only the franchise, but the fans of the team. And for those that thought the late run would keep him there, it unfortunately did not. Durant signed with the team that beat them, the Golden State Warriors, and left Westbrook by himself to commandeer the Thunder team. Many saw a glimpse of Westbrook by himself a couple years ago when Durant was out of action with a foot injury. The mercurial point guard was explosive and he put up monster numbers. But those numbers did not ultimately lead to wins. So coming into this season, there were some that wondered how he would do being the full-time solo actor in Oklahoma City. Well, if the first game is any indication, the lone star will be doing things just a little bit differently than he did in the past.

On opening night, Russell Westbrook came out and led his team to a 103-97 victory over the Philadelphia 76ers. And predictably, Westbrook put up big numbers in the scoring column. He ended the game with 32 points. But what was different is how he did it. In the past, Westbrook would shoot the ball at least 35-40 times to get those 32 points. He was very inefficient and that could often cause the offense to be disjointed because of it. But if the first game is any indication, he is bringing a different approach this season. Westbrook, who has shot in the low 40% range for his career, was way more efficient in this game. He shot 11-21 from the field, which averages out to a little over 52% from the field. He was attacking the rim as usual, but he was taking what was given to him as well. Not many of his shots were just shots that he jacked up out of rhythm. And the biggest change was that he cut down the three pointers. Over the past three years, he has shot at least four three-pointers per game. But in this one, he really was not looking for that shot. He hit his first three in the third quarter when his team really needed it. And as for the shot, it was in rhythm and not forced. In the past, he would have shot a few of those three-pointers with no rhythm at all. And that would disrupt the offense. It's only one game, but it seems like he is trying to do things a little bit differently.

But not only was his shot selection different, but so was his approach to the game in general. We all know that Westbrook is highly aggressive and sometimes, that can block out his teammates. But in this one, he was getting them involved more than usual. He was attacking the rim and not only looking for his shot, but looking to involve teammates. Him drawing the attention of the defense allowed for guys like Steven Adams to get some easier shots. Adams, who showed up offensively in the postseason last year, finished this year's opening game with sixteen points on sixteen shots. And as far as the team, the Thunder had five players in double figures as Westbrook dished out nine assists and probably had two or three passes that led to an assist. Because of his ability of break down defenses, Westbrook will be able to do this all season is he chooses to. And in his mind, he has to know that he has to get all of his team involved if they are going to be successful. But along with getting everyone involved, Westbrook also knew when to takeover and when to back off. In the past, Westbrook would have issues because of his aggressive nature. But in this game at least, he showed that he can find some balance between distributor and scorer.

For the Thunder to be successful, a lot falls on the shoulders of Westbrook and how he handles being the main focus of the team. And with how everything went down with him in the first game, they can only hope that this trend continues. The more he gets his teammates involved and finds balance, the better the Thunder will be. Welcome to the Russell Westbrook era ladies and gentlemen. It will be interesting to see how things go and where they land in the Western Conference picture. 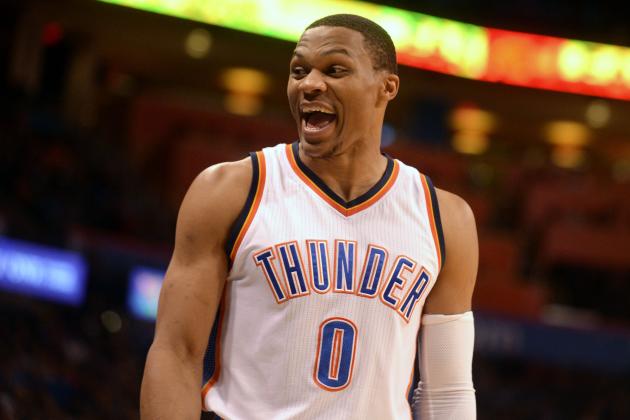