The Clcveland Cavaliers have not gotten consistent production out of their shooting guard position all postseason. JR Smith has averaged only 8.4 points on 34.5% shooting. He has drawn the ire of many of fans of the NBA this postseason, especially with the incident in Game 1, but he is not the only one struggling at the shooting guard spot. Kyle Korver was solid off the bench in the first three rounds of the playoffs, but in the NBA Finals, he may as well be nonexistent. The veteran sharpshooter is averaging a measly two points while shooting 16.7% from the field. And what makes things even worse is Korver cannot get his shot off at all because the Warriors are in his area at all times. Couple the offensive stats with the fact that Korver is a defensive liability and JR is not exactly playing the best defense and the Cavs have an issue right now at that spot. Of course, the thought was Lue would continue to ride with the veterans, hoping they would break out of their funk, but he had something to the media today that many NBA fans have wanted to hear him say. When asked about Hood, this is what Lue had to say: "We are going to give Rodney Hood a chance." So since Hood is getting a chance, what can we expect from him?

One thing we do know about Rodney Hood is he is capable of putting the ball in the basket. Before his trade to Cleveland, Hood was averaging 16.8 points per game and was shooting 42.4%. After he got to Cleveland, his points per game went down to 10.8 and that was expected. What wasn't expected with him being in Cleveland was him being buried at the end of the bench. For whatever reason, he fell out of the rotation and even balked at going into a game during garbage time. While he fell out of favor though, he still provides something the Cavs need: another playmaker. Hood is 6'7" with springs for legs. He can be explosive at the rim and when he is hitting his jump shot, he can be even more dangerous. One thing he also does is negotiate the pick-and-roll well and that can give the Warriors some issues. And on the defensive end, his size is good enough to guard multiple positions. He could help the Cavs against the Warriors by potentially giving them more punch off the bench and being able to match up better with guys like Shaun Livingston and Nick Young off the Warriors bench. Plus he could also provide the Cavs a way to keep some scoring on the court in the event they can give LeBron some rest on the bench.

While Hood could provide some much-needed scoring punch, there are some negatives going into the Hood insertion into the rotation. One thing is that no one has any idea what he will provide. Hood could come out and give the Cavs double figures off the bench or he could come out and give them next to nothing. The roll of the dice means more than likely Korver is out of the rotation as well and that means the threat of another guy knocking down the three goes down significantly. With LeBron on the court with Hood, the court does not get spread as much as it would with Korver out there. Last, but certainly not least, Hood has to chase around Klay Thompson and communicate defensively on screens and switches. Because he has not been out there, it could take him some time to get used to the flow and feel of the game on that end of the court. Unfortunately, the Cavs will not have that time for him to feel his way into the game. At the blink of an eye, the Warriors could go on a run that could crush Cleveland in their own gym and that wouldn't be good.

Hood getting some minutes is a calculated risk. While he is the better athlete and can create some offense, there are no guarantees his confidence level will be where it needs to be for him to contribute. For Cleveland's sake, they better hope he can give them a shot in the arm because we know Korver and Clarkson haven't given them much off the bench and JR has been missing as well. Game 3 could not only be important for the Cavs but for Hood's next contract. We shall see how he reacts to this pressure-packed situation. 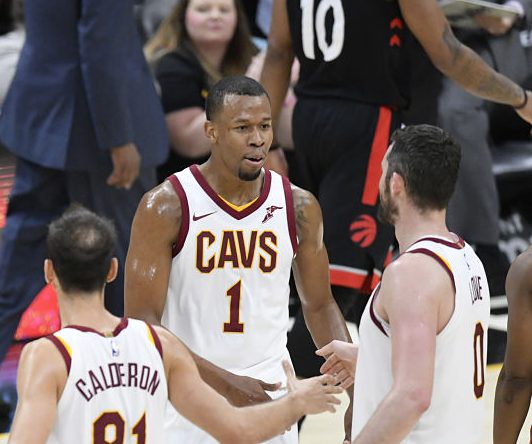