The Toronto Raptors met the Cleveland Cavaliers last year in the Eastern Conference Finals. The battle, which was expected and anticipated all season long, was one that would be physical as well as have it's twists and turns. Unfortunately for the Raptors, they were not able to overcome LeBron James and crew, as Cleveland would beat them in six games and advance to the NBA Finals. Coming into this season, the Raptors wanted to take that next step. They got a taste of success but were not able to take it to the next level and beat the Cavaliers. The Raptors wanted their time to shine and this year was supposed to be the year for them. Well, they got their rematch with the Cavaliers, but it came a round before they expected it to. The third-seeded Raptors traveled to face the second-seeded Cavaliers in the Eastern Conference semifinals. While the Raptors may have said they wanted to make it back to where they were last year and beyond, they surely did not look like it in the first game of the series. The Cavaliers were on cruise control essentially all game long as they coasted to a 116-105 win against Toronto. As for the game, the Raptors looked good in very few spots and for the most part were fighting an uphill battle. But whether they lost by one or thirty, it is only one game. However, in order for them to win Game 2, some things definitely have to change.

Offensively, they have two guys that went missing in action. Their names are Patrick Patterson and Jonas Valanciunas. Both players combined for eleven points in this game, but it was a very uneventful eleven points. Patterson is supposed to be able to stretch the floor with his ability to hit three's for a power forward. In this one, it seemed like he could not really find himself from deep, as he went 1-5, including a badly shot airball. He finished with five points, but those five points were really quiet. But what was even more quiet was the game of Valancuinas. The talented big man can be very impactful when he is given an opportunity to make things happen. But in this one, it just seemed like he was running up and down the court for nothing because he did not have any impact on the game at all. He had some chances to make an impact, but even then he did not take advantage of the opportunity. For Patterson, he has to be better. There is just no way around it. He has to be able to be efficient and shoot the basketball better for Toronto to have a chance. They need his offense off the bench. As far as Valancuinas, he definitely needs to step it up. He could do some damage for the Raptors against the Cavs because of his size. What Toronto needs to do is get him the basketball early, similar to what the Cavs do with Kevin Love. If they do that for Valancuinas, then maybe they get a more engaged big man that can help more than he did.

Defensively, the Raptors were got time and time again by the Cavs. The Cavs were cutting to the basket, hitting wide-open shots and just doing whatever they wanted to. For a team that is supposed to be defensive-minded, there seemed to be nothing that would have told me that on Monday night. One guy that was supposed to be a good defender for Toronto is DeMarre Carroll. The veteran wing player joined Toronto with the rep of being a "3 and D" guy. Well, he has not really shot the ball well and his defense has been lacking. So if this is the case, then why is he out there? Coach Casey may have to make a change at that position and go with PJ Tucker because he is getting nothing from Carroll except him running up and down the court. Another thing that Toronto may want to think about is a quick hook on Valancuinas. The big man has been slow to make an impact offensively and it seemed like he was absent on the defensive end as well. So by pulling him out, then you can slide Serge Ibaka to the center position and put a tough customer like either Tucker or Patterson (provided he decides to show up for Game 2) at that power forward position. Either way, some adjustments have to be made for the Raptors defensively because the baskets for the Cavaliers were coming way too easy for the Cavs.

All in all, it was a bad showing for the Raptors in Game 1 against the defending champions. They had some guys that were on the milk carton all game offensively and were getting passed by like turnstiles in the New York subway on defense. Ultimately, the Raptors have to get it together before Game 2 if they hope to compete with the Cavaliers. We shall see what adjustments they make when that game comes around, because whatever they did in Game 1 is going to get them beatdown. 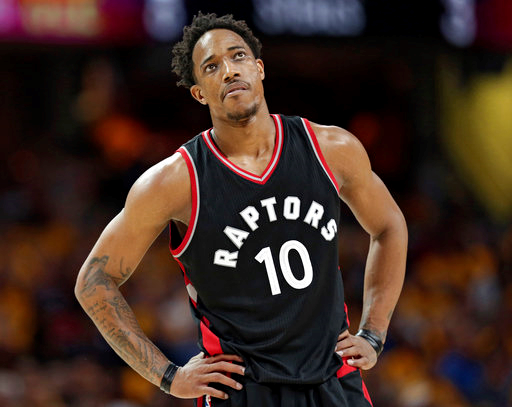