The movement of Kyrie Irving to Boston was one that shocked everyone. The pairing of LeBron James and Kyrie was thought to go at least through this season and would have Kyrie going along with the pairing more or taking over by himself when LeBron left. Well, the trade happened and Kyrie is a member of the Celtics. The Cavs got Isaiah Thomas and Jae Crowder as the headliners of that deal coming to them and the thinking was they won the deal in some circles. After they traded both of them before the trade deadline, plenty began to clown them for getting ride of Kyrie for essentially nothing and giving up on the trade so quickly. That clowning quickly stopped when it was announced Kyrie Irving was going to have knee surgery and be out until the playoffs. The clowning went to a complete silence when it was later announced that Irving would be out the rest of the season with some complications from the surgery. So with all this happening with Kyrie, did the Celtics actually win the trade?

Looking at Kyrie's history, he has battled some injuries over his time in the NBA. One big one he has battled is his knee. It was most famously talked about when the Cavs lost to the Golden State Warriors in the NBA Finals back in 2015. Kyrie fractured his kneecap in the first game of the NBA Finals. He came back next season and played well, but that knee injury, especially a kneecap, is one that will never go away. And in this season, it flared up yet again. A surgery like one on a ligament would be one that could draw concern, but not be as huge a concern. When you're talking about a kneecap, that is huge news. Eventually there are only so many surgeries that can be done to fix it and when you start talking about infections and wiring with a kneecap too.

The kneecap is not only an issue for Kyrie and the Celtics on the floor, but off it as well. Kyrie Irving is entering the last guaranteed year of his deal next season. He is scheduled to make over $20 million next season and the year after that is not guaranteed. This means Kyrie could more than likely be looking for an extension this summer. The Celtics have done a good job being responsible spenders and this will be yet another test of that. The Celtics traded for Kyrie to pair him with Gordon Hayward and now it has to cross Danny Ainge's mind about if he should keep those two together for longer than after the 2018-2019 season. Tying up money into a guy with a serious knee problem is questionable at best and remember Ainge didn't want to tie up money into Isaiah Thomas, who is still battling through a hip injury he suffered in Boston.

The Celtics looked to be smart move-makers but the Kyrie trade is now starting to give Ainge a little more to think about. He never thought he would have to think on giving Kyrie more money via an extension, but now we are here. Kyrie is going to want his money and want to be locked in at a very good rate. All this is going on while the Celtics are developing Jaylen Brown and Jayson Tatum makes for some interesting things coming over the next few years in Boston. It should be worth watching to see what they do. 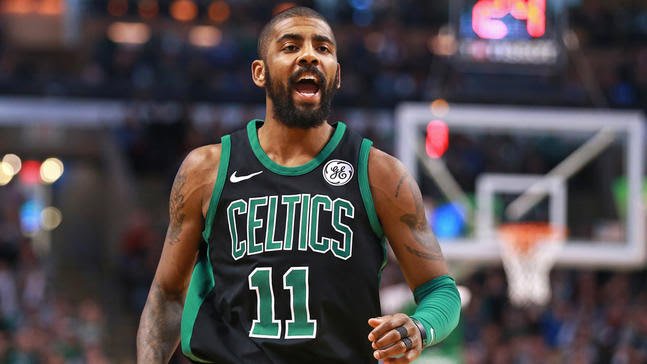