Portland was in unchartered territory. They were not expected to even make the playoffs this season after losing four of their five starters and two key reserves. But behind the strength of guards CJ McCollum and Damian Lillard, the Trailblazers defied odds and became the fifth seed in the NBA’s Western Conference. But they were not done there. They defeated an injury-plagued Los Angeles Clippers team in the first round of the playoffs and went on to take on the Golden State Warriors. And although Portland fought hard and gave the Warriors all they could handle, they ended up losing the series in five games, culminating with a 125-121 loss late Wednesday night in Oakland, California. And with that, the season is over. But no one will forget the performances of McCollum and Lillard during this series. Both were spectacular at times and helped keep their team in the games. But both also did some things that made you cringe. And for them and Portland to take the next step, some improvements need to be made.

There is no doubt that Lillard and McCollum are a dangerous backcourt. Both can give teams headaches as they hit some very difficult shots, as Golden State witnessed. But where do their easy shots come from? The one thing you always noticed the whole series against Golden State is that Lillard and McCollum take a lot of contested shots. This just wasn’t the theme for this series for the series versus the Warriors, but for their whole season. To their credit, they hit some of these contested shots. But when you are in the playoffs, you have to be able to get some easy buckets. For example, the Golden State series was rough on both of them. Lillard shot an abysmal 36% shooting percentage for Lillard for the whole series and McCollum had a couple rough games shooting the basketball. The cure for that is for Lillard and McCollum to play off each other a little more. For example, you really don’t see Lillard driving to the basket and finding McCollum for a wide-open shot much and vice versa. If they are to take it to the next level, they must grow in that aspect as a tandem. The more they are able to grow there, the more efficient both will be. Imagine how scary they both could be if they were more efficient.

But the efficiency is not the only issue for Lillard and McCollum. Both like to shoot the basketball and both can be playmakers, but they also need another weapon to add to their team. So much pressure is on these two to produce. And to their credit, they both have produced and played well. But they need a consistent third scorer to go along with what they have. In this series versus the Warriors, the X-Factor became Al-Farouq Aminu. The 6’9” small forward was dynamite, averaging 17 points per game against Golden State. But during the season, Aminu was nowhere near that effective. He only averaged 10 points per game. The question with him is whether he can develop into a more consistent weapon the Trailblazers can depend on. If he can, then that makes the Trailblazers even more dangerous. If Portland does not think he can become the third option for them or does not think the third option is on the roster, then they may want to try and find one in free agency. They should have roughly $42 million in cap space to make some things happen. Of course Portland is not the most ideal destination for a player, but it isn’t out of the realm of possibility that they could add someone. One player that would fit them perfectly is Atlanta’s Al Horford. Of course he will demand big money, but Portland will have the money to sign him if they choose to pursue him. Lillard and McCollum are talented, but they cannot do it all by themselves. They need some help.

The good thing for Portland is they far exceeded expectations. Many had them slated for the draft lottery and not the NBA playoffs this year. But they showed us that they were better than anyone thought they were. But in exceeding expectations, there will be more expected from this team next season. The bar has risen and in order to keep up, their talented backcourt has to continue to improve and the Trailblazers have to find that third scorer. If they are able to make that happen, then there is no telling how good they can become. 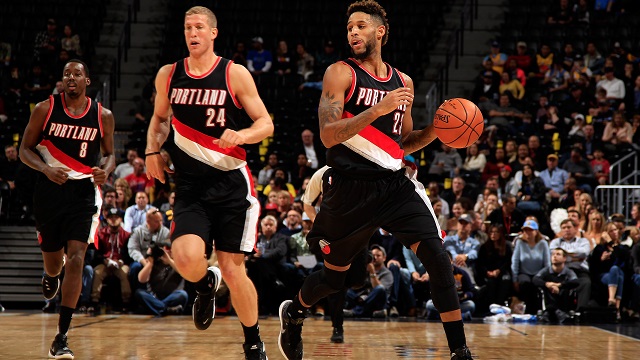