Time to shake things up in Portland

The Portland Trailblazers got hot the second half of the NBA season, propelling themselves to the third seed in the Western Conference. With how well Lillard and CJ McCollum were playing, it was thought this would be the year the Trailblazers won a first-round series. After watching them against the New Orleans Pelicans in four straight games, that dream of winning a first-round series did not come to fruition. The Trailblazers would lose four straight to the Pelicans, as New Orleans looked like the better team. With what they have coming back, it seems the organization is at a crossroads. They have won enough to make the playoffs but have not been able to win a series. So with that in mind, what else do they do?

The first thing the Trailblazers have to do is make a decision about their coach. Terry Stotts has been the coach to lead their regular season success. The team has routinely gone through things and still ended up making the playoffs. Eventually, that isn't enough though. It seems like Stotts cannot get it done when it matters the most. You cannot, however, blame all of it on him. Just take a look at their roster and you see Evan Turner making multimillions, Myers Leonard making big money and Mo Harkless making big money as well. Neither Harkless nor Leonard or Evan Turner gives the Trailblazers consistency and that has to be frustrating for the Trailblazers. With that being said, Lillard, McCollum and big man Jusuf Nurkic at his disposal. There is no way Portland should have been swept by the Pelicans with arguably one of the best backcourts in the NBA and a good young big man. Stotts creativity offensively was not there and has never been to be quite honest. It has been covered up though because of the outstanding play of his star players. And defensively, they got ate up by the Pelicans and there is no defending that at all.

Stotts is not the only tough decision the Trailblazers have to make. One other one they will have to make is in regards to their backcourt. McCollum and Lillard have been tough to handle as a duo, but they have not produced anything in the postseason for them. So with that being said, maybe it's time to look at moving one of them. It isn't that they are not great together, but one of them may be able to bring in the pieces they need. If you look at their small forward position, they have no one there. Lillard or McCollum could bring them that along with a draft pick and could allow them to potentially not miss a step on the way towards building a solid team. The ideal candidate to move would be McCollum only because Lillard has proven to be more adept at playing point guard than McCollum is (the small sample of McCollum playing PG was not better than Lillard).

Looking at the Trailblazers and their current roster of high-paid players, they need some work and an overhaul immediately. Hopefully their general manager will get to work, because as much as Damian Lillard struggled in the playoffs, their general manager struggled with some decisions on who to pay. Leonard is dead money at this point. Evan Turner can be solid at times but isn't consistent. Harkless is inconsistent as well. It ought to be an interesting postseason in Portland. 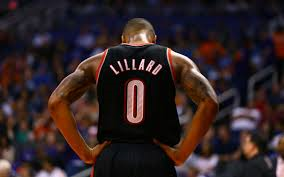