The Philadelphia 76ers Have A Decision At Number One

The Philadelphia 76ers and Los Angeles Lakers had been waiting for this moment. The NBA Draft lottery represented a culmination of what their whole season was about. Both teams were pretty bad this past season. But the losing was done with a reason in mind. The Lakers and 76ers were looking to get the top pick. The Lakers had even more pressure to lose this past season because if their pick was not within the top three, then they would have to give it away to the 76ers. Well, fortunately for the Lakers, they landed the second pick in the draft. But unfortunately for them, they did not get the number one overall pick that they wanted. The Philadelphia 76ers own the first overall pick for the first time since they selected Allen Iverson first overall in 1996. And like Iverson, they are expecting this first overall pick to have a big impact on their team. But the question is who do they take? There are two talented guys that can help their team with what they bring to the table. But unfortunately for them, there can only be one selection they can make. So will it be LSU’s Ben Simmons or Duke’s Brandon Ingram? The 76ers have some time to go over who they want and what they want to do, but let’s take a look at both and their fits.

Simmons has been regarded as the first overall pick since he stepped foot on the campus of LSU. The 6’10 forward from Australia is a talented player for his size. And although he cannot shoot the ball from the perimeter very well, he can find people and make plays for his teammates. If he lands in Philadelphia, he instantly becomes a playmaker that they need. And of course the team will want to get him on the court as much as possible. But therein lies the issue. Simmons has the skills of a point guard but he will more than likely start out as a power forward. With his addition, the 76ers would have a crowd at the power forward and center spot. They would have Nerlens Noel, Jahlil Okafor, Joel Embiid and also Dario Saric that is reportedly coming over to play for the team. Adding Simmons to that would give them five players to rotate at two positions. And in assuming that Embiid comes back and is healthy, the 76ers could be shipping one of these players out of town should they select Simmons. The likely candidate to be shipped out would be Jahlil Okafor if all are healthy. Embiid would not fetch much because of his injury past, Saric’s not one the 76ers want to ship out and Noel is the best defensive big man Philadelphia has. At the trade deadline, Okafor was reportedly dangled out there. Many teams could use a big man that can score on the block. And in trading him, the 76ers could get more pieces to help them rebuild their team. Simmons would be a great piece for Philadelphia to add, but it also seems like his selection could create duplication for the 76ers.

Ingram, on the other hand, would fit in with the 76ers immediately. The 6’9” small forward from Duke is very talented offensively. He can shoot with range, can hit the midrange jump shot and he can attack the rim and finish with his length. Looking at the 76ers team right now, they are missing a guy on the perimeter that can consistently score for them. Robert Covington was nice for them, but he is not a starter on a contending team. In adding Ingram, they would get a guy that has the potential to lead them in scoring in a year or two. That is exactly the type of player that could help lead the 76ers to the playoffs in the future. And the good thing with him is that he would fit an immediate need for Philadelphia. But with Ingram, there is also the issue of his weight. Although he is talented, Ingram is a very slightly built guy right now. Ingram’s length is a good thing, but with his lack of weight, he will not be able to defend his position very well. Matching up against guys like LeBron James would be painful for him because LeBron would take him down to the post and that would get ugly. If Ingram adds some weight, then he can defend his position and score at it too. Ingram may not be the playmaker the Sixers need, but he does bring the scoring punch that they have been looking for on the perimeter.

The 76ers have a month to make their decision and the good thing is they have two talented players to choose from. Do they decide to take on Ben Simmons or do they decide to bring in talented small forward Brandon Ingram? If they are drafting for immediate fit, then they should take Ingram. He will eventually be a star in this league. If they draft Simmons, he also could be a star, but they would be drafting at a position which they already have talent at. In the end, it’s all about what they feel is best for them as an organization. The clock is ticking Philadelphia. Who is it going to be? 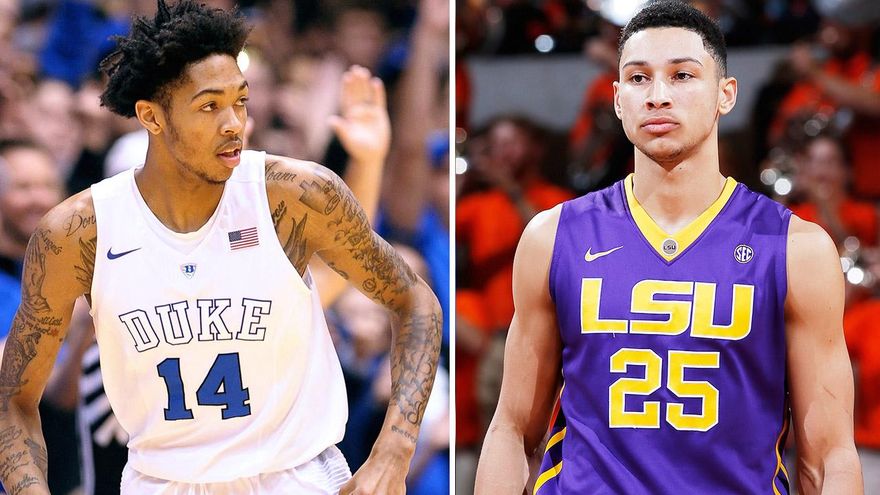