The New York Knicks did not have a bad offseason this year. They upgraded their point guard position with the acquisition of point guard Derrick Rose from the Chicago Bulls. And in upgrading that position, the Knicks got rid of Jose Calderon, whom the Knicks could not use, and Jerian Grant, whom it seemed like they did not believe in. Add in the addition of veteran guards Courtney Lee and Brandon Jennings along with veteran center Joakim Noah and it looked like the Knicks were a playoff team. And if the playoffs were to start today, the Knicks would be back in the playoffs. Pretty much all the moves made by president Phil Jackson were greeted well this offseason and the team has shown improvement. But the improvement of the team has been overshadowed by the talk of Jackson. The multiple championship-winning former coach has had some comments in the media that have not necessarily been received well. First it was his comments about LeBron and his "posse" and now there is comments about Carmelo Anthony and him being  a ball-dominant player. Of course those comments ruffled the feathers of not only Carmelo and LeBron James, but the feathers of many that keep up with the Knicks. People are wondering what is Phil doing and why is he even talking like this. My question to those wondering why Phil is saying what he is saying recently is where have you all been?

Phil's coaching greatness started when he became the coach of the Chicago Bulls. At that point in time, no one knew what to expect from the former championship player from the New York Knicks past. But what started in Chicago and extended to Los Angeles was greatness in the coaching realm. And while some will debate how great a coach he was because of the players he coached, you can never debate that he played a role in those championship runs that he was a part of. But while some get caught up in all the hoopla surrounding his eleven rings, some seem to glance over the personality he had. When he had his brushups with the Bulls organization during their last championship run, no one thought anything about it. At that point, many were more mad at the Bulls organization for them wanting to change a winning combination with Michael Jordan and Scottie Pippen then they were with Jackson and Jackson was just saying what many were probably thinking. But as he went to the Lakers after a layoff from coaching, Phil began to let loose just a little bit more. He essentially went at Kobe Bryant in a book and had some other things to say during his tenure there that were not exactly the best things to say. So again I ask, why did anyone expect anything different with Phil the president of basketball operations that he had not done as a coach?

Phil Jackson may have been a master motivator on the court, but he has said some slick things and no one really checked him on it because his teams were winning. But now that he is with the Knicks, those warts cannot be hidden as much as they were when he was winning every season. The Knicks have not really done much since Phil has been there. And as much as he has drawn the ire of fans for his putting together of teams, he is catching as much if not more heat for his comments. Some may want to think he did that on accident or it was not a big deal. But big deal or not, Phil knows what he is doing when he makes any comments. Phil is a smart guy that thinks outside the box and says what is on his mind. And everything he says is actually very calculated. But what Phil may want to learn is he is not a coach anymore. He is not supposed to be in the limelight at all. In fact, all this attention on him is not what is needed for the Knicks at all. He may want to realize that at this point, he is not supposed to be heard. And if he wanted to be heard and criticize the team, then he should come down out of the seats and coach the team. Then at that point, his voice would really matter. But until then, the comments he makes are nothing but a distraction.

As the days pass, the marriage between Jackson and the Knicks is increasingly becoming more about Jackson being the star of the team instead of him being the silent guy behind the scenes. And with him ruffling the feathers of his star as well as LeBron James, other players around the NBA will be paying attention. Phil may think some things, but his time of talking to be heard is over. But again I ask, what did we really expect? Phil is going to be Phil. He has been this way since we have known of him. And for better or worse, this is who the Knicks have to build them back up. He has not done a bad job this season building the team, but the comments he makes is taking away from what he has done quite honestly. Philly Phil, you gotta chill. 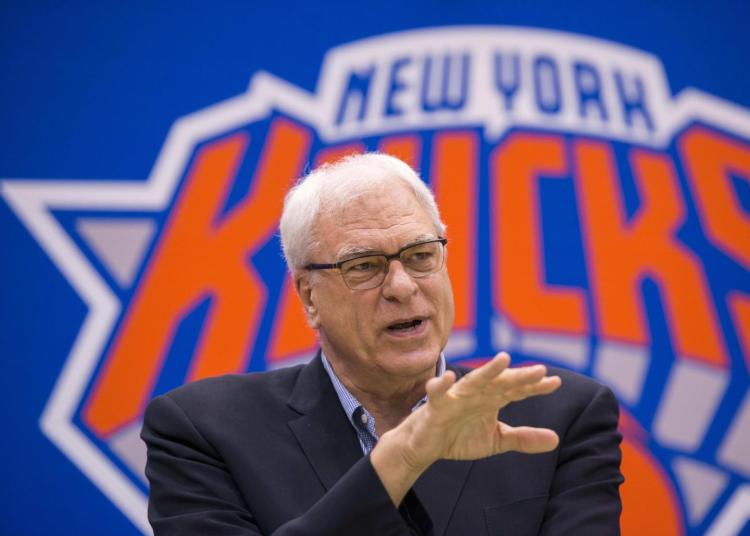