Stay Away From Sacramento Patrick Ewing

The NBA postseason isn’t the only thing going on since the regular season is over. Teams that did not live up to expectations or for whatever reason fired their head coach are looking to name a new one. Minnesota has already pounced and named Tom Thibodeau their new head coach along with the president of basketball operations. And Warriors assistant coach Luke Walton will take over the Los Angeles Lakers as head coach once his job is done with Golden State. But there is another opening out West that needs to be filled. That job is the head coaching position of the Sacramento Kings. As many know, the Kings fired head coach George Karl after the season was over. The experiment of him coaching this team did not work as well as they thought it would. And as a result, the Kings did not make the playoffs nor come close. There had been some mystery as to who the Kings had in mind to coach their team next season. Well, the mystery is gone away in a sense. The Kings have scheduled an interview with current Charlotte Hornets assistant Patrick Ewing for their head coaching position. The longtime assistant and former NBA star center has been sitting on NBA benches passing along knowledge for years now but he has never got a head coaching position. This could be his big break. But for as much as know about the Kings right now, he may be best for him to pass on this position.

The Kings have a talented big man in DeMarcus Cousins and that is something you can build off of. And there is some thought that Ewing could guide DeMarcus and lead him in the right direction. But for a coach that has never had a head coaching spot, that is a lot to ask. Sure, former Kings head coach Mike Malone was able to reign in Cousins and get him to play consistently and play well. But other than Malone, there have not been any NBA coaches get that out of him. Cousins, for as talented as he is, can be a hard one to figure out. He can be great one minute and be unexplainable a minute later. And along with the inconsistencies, he still has not learned how to control his emotions. Asking Ewing to mentor Cousins along with trying to figure out rotations and things like that is a lot to do. And for a first year coach, that would not be an ideal situation to come into. Ewing has been a good assistant and he does not deserve that type of job to start his head coaching career. There will be enough pressure as it is to return to the playoffs.

Along with the issues on the court, there are issues off the court as well. Kings management has not exactly been the most solid group around. The team fired head coach Mike Malone back in 2014. That move stunned everyone because the Kings were 11-13 and they had achieved that record with Cousins being out injured for some of that time. They would be still in the running with Cousins coming back healthy, but Sacramento management had other ideas. But that was just the beginning of the madness the last two years. The team hired George Karl at the All-Star break last season after saying that interim head coach Tyrone Corbin was going to be the interim head coach for the rest of the year. And then the team was going to fire Karl at the All-Star break of this past season but they decided against it at the last minute. Does this sound like a front office that Ewing would want to work for? It sounds like the front office there is not on the same page and is shaky. Vlade Divac, who is the Kings general manager and vice president of basketball operation, and ownership have to get on the same page before any coach should come there. Ewing does not want to jump right in the middle of management that’s not on the same page.

The Kings have to fill their position and the candidate pool is running out. Ewing is in consideration, but there has to be something better come along other than this. The organization is not in great shape both on and off the court and that is some stress that Ewing does not need to be a part of. So Patrick, continue to be an assistant until the right position comes along because Sacramento isn’t the right one. 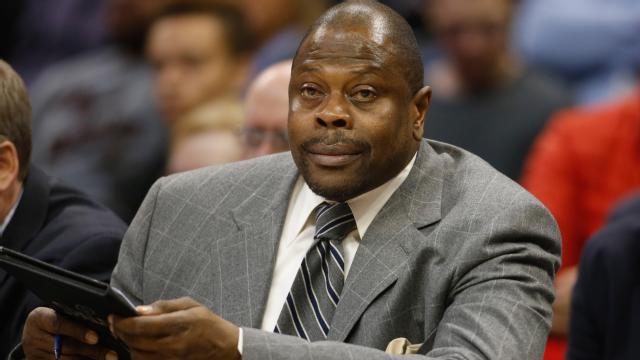