The Oklahoma City Thunder were one game away from making the NBA Finals for the second time last season. They were up 3-1 against the Golden State Warriors and just could not close the deal, losing in seven games. And with that, the Kevin Durant free agency process started. It was believed by many that he would come back for at least one year and team with Westbrook to try to win a title. But all that speculation went out the door when it was announced through The Player's Tribune that Durant would be signing with the Golden State Warriors, the team the Thunder just lost to in the Western Conference Finals. Of course the Thunder organization and their fans were disappointed in the decision. But there's one guy that could keep their hope alive in Oklahoma City. His name is Russell Westbrook. With Durant gone, he is now the king of the castle. But is it for sure that he will actually be ruling the castle? The answer to that is an emphatic NO!

The decision whether Westbrook is there next season or not falls on the Thunder. If they decide to keep Westbrook next year, we will finally get to see what he can do on his own full-time. Remember when Durant was hurt a lot in the 2014-2015 season? At that time, many wondered how Westbrook would respond without his superstar teammate. Well, Westbrook not only responded but he showed out. He had a few triple-doubles and he also was able to get others involved like Enes Kanter and Steven Adams. And the Thunder were still an entertaining team to watch. With Russell there to lead this team going forward, the Thunder would still have a shot to make the playoffs. But the one thing that would hurt them in that run is finding a reliable second scorer. The Thunder acquired Victor Oladipo from the Magic when they traded Serge Ibaka away, but he can be inconsistent at times and they may not have had him slated as a starter for this team. Steven Adams is still developing (although quite nicely) and could need another year to become what they think he will be. And besides those two, big man Enes Kanter can score but could give up just as much as he scores. The outlook on scoring would not be as great as it was with KD. But with the ability that Russell has, he could make those players around him better. It is just a matter of him finding a balance of shooting and getting others involved. That type of special talent that could lead your team is a hard one to get rid of. And if the Thunder have a sense that he wants to stay and build this organization, then they may want to stake it out and wait for Westbrook to decide where he wants to be in the 2017 offseason.

But on the other hand, the Thunder may not want to end up in the same situation they just were in with Kevin Durant. They got absolutely nothing in return for Durant leaving for Golden State and this now leaves the Thunder trying to figure out a few things. Westbrook has said that he does not want to sign the extension now and that could mean they get left out to dry two years in a row. So if they are scared of that situation happening again, then they need to trade him as soon as possible. As far as where they could send him to, there is one place that makes great sense: the Los Angeles Lakers. The Lakers may not have the picks that Oklahoma City needs, but they would have some young pieces that may interest the Thunder. One of those young pieces would be guard D'Angelo Russell. With Westbrook coming to town, there would be no need for him there in Lakerland. He would get what he wants in getting to handle the ball more in Oklahoma City and he would not have that bad a supporting cast. No matter who they grab, the Thunder would love to get someone back that can replace what they lost. Of course they know the talent they have would not be able to be as great as Westbrook, but it would be something that they could start to rebuild their team with. And for Westbrook,  he would be returning to a place he still calls home while being somewhere that can help his fashion career as well.

The Thunder were on the clock for Kevin Durant and now they are on the clock for Russell Westbrook. Should they decide to move him now, it will save them a lot of heartache later. But they could want to wait it out as well. Realistically, we may get a happy medium and he could be traded at the trade deadline somewhere. But only time will tell. Oklahoma City, the pressure you thought was gone is still there. Just look at your point guard spot. 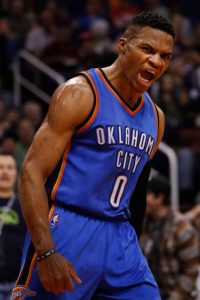