The Gift And The Curse Of Andre Roberson

The reigning MVP is now the point guard of the Oklahoma City Thunder. Russell Westbrook was fantastic last season as he averaged a triple-double and carried his team into the playoffs. He did pretty much everything for the Thunder last season. While that type of performance is incredible, it probably is not one that is sustainable for the rest of his career. In a basketball world of ever-changing defenses and teams, pinning all the playmaking on one man along with having him score most of the points is not a good idea. So heading into this offseason, there were plenty that wondered what the Thunder were going to do. The team needed some more firepower, but those around the team did not have any idea as to how they would get it done. Just as soon as many thought that would stand pat, a deal happened that plenty people did not have any idea was coming. The Thunder traded Victor Oladipo and Donatas Sabonis to the Indiana Pacers for the services of one of the best two-way players in the NBA, Paul George. Immediately, George upgraded their team, giving them another playmaker, a guy that can knock down shots and a defensive wing that can help them defend other teams in the West. After this deal, there were many that got onto the Thunder and felt they traded away pieces for a one-year rental. But whether it be one year or more, George is there now and the Thunder are better equipped to support Westbrook at least for one year.

Having George there in Oklahoma City is good, but the Thunder needed more. One guy that had been linked to the team was free agent forward Rudy Gay. The versatile wing player can play the power forward spot in smaller lineups and small forward in regular lineups. He can score and score well from the midrange level, in the post and can still finish at the rim. His addition would give the Thunder some more scoring punch and he could potentially be scoring punch that they needed off the bench. But of course, there was other options that Oklahoma City were looking at. One of those options was their own restricted free agent, Andre Roberson. The talented defender was free for anyone to sign but no one really extended an offer to him. With the thought of potentially Rudy Gay in Oklahoma City to add to what they had already done, there was a natural fit at the small forward position if they moved Paul George to the shooting guard position. With newly-signed Patrick Patterson, that lineup would make the Thunder bigger, more physical and more versatile as well. But instead of the Thunder going in that direction, they chose to go with someone that was familiar with them and their system.

The Thunder decided to recommit to wing player Andre Roberson to the tune of three years and $30 million. And just like that, the Thunder now boast a starting lineup of Russell Westbrook, Andre Roberson, Paul George, Patrick Patterson and Steven Adams. Not a bad lineup compared to what the Thunder had last season. The one big addition is Paul George. He will definitely take some of the pressure off Russell Westbrook offensively. But on the defensive end, Roberson can help take some pressure off George. For years, George has had to be the best offensive and defensive player on his team. He still is the best defender on his current team, the Thunder. But what he can do is take a little bit of a break on the Thunder team as long as Roberson is on the court. Roberson is considered a very good perimeter defender. He can handle the best offensive perimeter player on the opposing team while giving George a break and allowing him to focus on trying to help Russell offensively. With that help that George was provided, now he can have more energy to finish games.

Roberson is definitely a huge factor on the defensive end of the court and he will help George on that end. But on the offensive end, the Thunder better hope he worked on his jump shot and his free throws. True enough, he is not on the court and getting the paid he was just paid by the Thunder to be a shooter and make free throws. He is a defender through and through. But even Bruce Bowen was able to hit the corner three-pointer as his career went on. On this team as it is currently constructed, Roberson, along with Patrick Patterson, is going to get wide-open three-pointers off the penetration of George and Westbrook. Patterson is a career 37% three-point shooter and with him at the four spot, he will definitely get some wide-open three's off pick-and-roll situations. As for Roberson, we cannot say that he will have the same luck in hitting as many shots. Roberson is a career 26% three-point shooter, which is not very good for a starting guard in the NBA. The Thunder are going to need him to hit the corner three-pointer off penetration because he will be wide-open. If he is not able to hit that at a better clip than he does not, then it will be like the Thunder are playing four versus five. Couple his bad shooting with him coming off a 42% free throw shooting season and the Thunder could have to make the move quicker to Alex Abrines, who shot 38% from three-point range last season.

The Thunder gave Paul George some perimeter help defensively with Andre Roberson but they also could be hindering their offense with him on the court. The challenge for head coach Billy Donovan is to somehow hide him offensively while taking advantage of his defensive prowess. The other option is for Roberson to lock himself in a gym and shoot non-stop from the three-point and free throw line. He could make himself less of an offensive liability if he puts the work in. 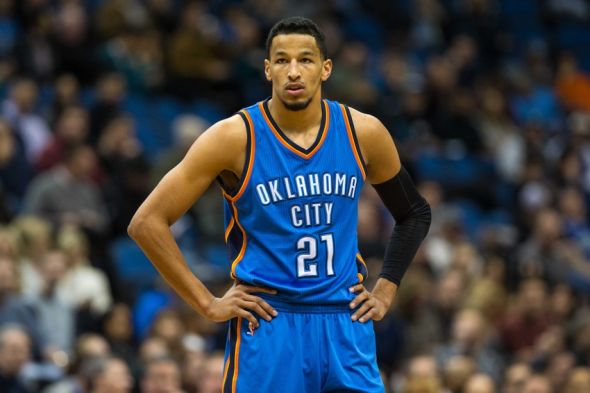