The warmup round is officially over in the Eastern Conference and now we move on to the semifinals. Competition was tough for the Toronto Raptors and Miami Heat, having to go to Game 7 to move on. But they are here in the next round and get to face each other starting on Tuesday. Meanwhile, the Cavaliers completed a four-game sweep of the Detroit Pistons and the Atlanta Hawks survived a chippy series against the Boston Celtics in six games. And now these two are set to face each other in an Eastern Conference Finals rematch from last season. The conference semifinals should be good. Let’s dive into both series. 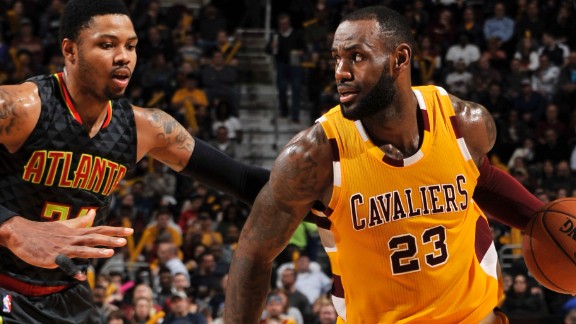 How Cleveland can win: The Cavaliers are the favorites to win the East again this year. But they have to handle business first. In order to win this series, the Cavs have to keep up the consistent defensive effort. That means closing out to the Hawks’ shooters and contesting shots. It also means containing the penetration of Dennis Schroder and Jeff Teague. Offensively, as long as they continue to get Kevin Love involved each game, the Cavaliers should be fine. The more he is involved and in a flow, the better the Cavaliers are as a team.

How Atlanta can win: The Hawks will be the underdog in this one just like they were in the last series. But unlike like year, the Hawks are not shooting the three as well as they did last year. But in this series, they may want to revert back to the things they used to do well. If Atlanta is able to have ball movement and penetration, then they will be able to have good, quality shots. And if they are able to cash in from three-point range on a good percentage of them, then there could be problems for Cleveland. On the defensive end, the problem is not shutting down LeBron James but making sure to take care of others around him. If the Hawks can make things difficult for Kyrie, Kevin Love and others around LeBron, then LeBron has to shoulder the scoring load, which is not conducive to what he wants to do.

Cleveland: Tristian Thompson may not get much done in the scoring column, but he can have a huge effect on this series. Even though he starts at center and is undersized for Cleveland, he is relentless on the offensive boards, giving Cleveland extra possessions. Those extra possessions could be the difference between winning and losing games. Atlanta better find him and box him out if they want to win.

Atlanta: Dennis Schroder is a very talented young player. Many think that he could eventually be a starting point guard in the NBA. But for now, he is the backup point guard for the Atlanta Hawks. And when he comes in, he can provide a big spark. His playmaking and defense helped Atlanta all season long and he can surely help the Hawks when he goes up against Kyrie Irving and Matthew Dellavedova.

Outcome: The Cavs breezed through last series, but this one will prove to be a little tougher for them, The Hawks are a veteran team that can give them problems, especially if they are shooting well. But in the end, there is only so much of a problem they can create. The Cavs will rise up and take care of their business against the Hawks. And with that, the season will end and questions about what will happen to Al Horford this offseason will arise. 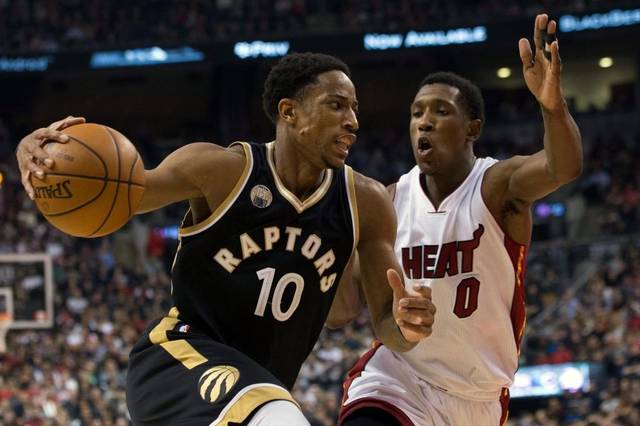 (photo courtesy of the Miami Herald)

How the Toronto can win: The Raptors survived the Pacers, but the Heat are a much tougher challenge for them. For them to win this series, they have to get consistent offensive play from their star backcourt of Kyle Lowry and DeMar Derozan. Going up against Goran Dragic and Dwyane Wade should push them to play better. But other than those two, Raptors big man Jonas Valancuinas has to come out and occupy Hassan Whiteside. If he does, then that causes some serious issues for Miami and give the perimeter players of Toronto more freedom. Defensively, the Raptors have to contain Goran Dragic. When he plays well, the Heat are a very tough team to beat. Toronto may want to try their best to force him to his right as much as possible. Along with containing Dragic, the Raptors also have to take care of the defensive boards and limit Miami there.

How Miami can win: The Heat were able to overpower the Hornets in Game 7 and survive. And in that, they may have helped unlock something that could help them against the Toronto Raptors. The Raptors have limited shot-blocking inside, so they must attack the rim relentlessly. In doing that, it paints them as the aggressors for potentially more foul calls their way. And it also puts tremendous pressure on the Raptors defense. Defensively, the Heat just have to continue defending like they did in the Charlotte series. Derozan and Lowry will help them defensively by shooting some bad shots, often shooting long jumpers while contested. That will help Miami get out on the fast break and get easy buckets. And with Toronto’s turnover issues, the Miami defense is the last thing the Raptors want to see.

Toronto: Norman Powell was someone that was not expected to contribute a lot in their series versus the Pacers. But with his stingy defense and shot-making, he became a key sub for the Raptors. In this series, he could become a big factor if he is able to knock down shots with regularity like he did against Indiana. And his stingy defense will help the Raptors in defending Dwyane Wade and Goran Dragic.

Miami: Luol Deng was the star of last series that no one expected. And in this one, look for him to be that guy again. Teams will be gearing up to stop Wade and Dragic. With all that attention they will receive, Deng will be able to do his thing without much attention. And before anyone knows it, he will have twenty points yet again, causing a quiet riot for Toronto fans as to how that happened.

Outcome: The Raptors finally got the monkey off their backs with their first series win since 2001. But the joy will only last but so long. The Heat will be ready for the challenge of taking on the East’s second-best team. The battles will be interesting all series long, but the veterans from South Beach will prevail in the end.

It will be interesting to see how the East shapes up after these series.