The Recent History Of The Second Pick In The NBA Draft 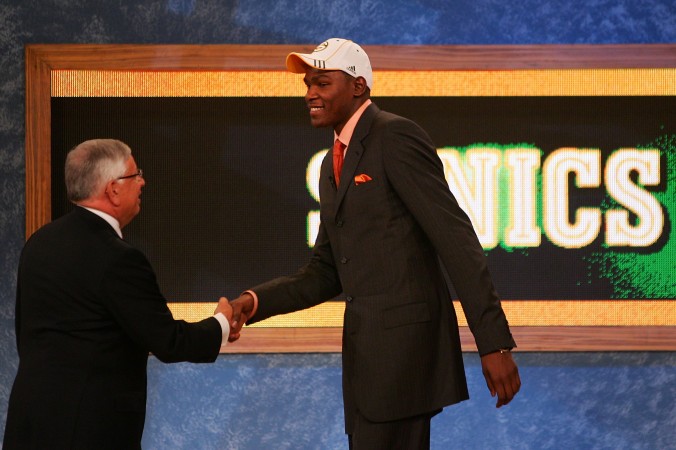 The number two is one that is not good in the sports world. Every second fiddle wants to be the main person and every runner-up always wants to be the champion. Similar to that, the 2nd overall pick in the NBA Draft always wants to be the first one taken (depending on the team drafting at that position of course). As we get closer to the NBA Draft, there will be plenty of talk as to who will go one and two in the draft. Some think that Brandon Ingram from Duke may have surpassed Ben Simmons as the top overall pick. And others think that Simmons will still be the top pick regardless of what happened his one year at LSU. There will be some jockeying back and forth for the number one spot and everyone will remember who went number one. But  let's the take a look at the recent history of the number two overall pick, which Ingram or Simmons could be.

Over the last 25 years, the second overall pick in the NBA Draft has had some notable names be selected there. Going all the way back to 1991, Georgetown center Alonzo Mourning was selected second overall by the Charlotte Hornets (the first incarnation of them). Mourning did not play his entire career for them, as he played for the then New Jersey Nets and the Miami Heat (he had two stints with the Heat) later after the Hornets. But Mourning made a measurable impact on the NBA during his time there. He was an All-Star multiple times, a very good offensive option (averaged 17.1 point per game in his career) and he was a very good defender of the rim, averaging 2.8 blocks per game in his career. Alonzo will definitely be remembered favorably by many who watched him and the time in which he played in the NBA. Besides Mourning, two current players who were selected second overall (and two former Texas Longhorns) are having very good careers. One of those former Texas Longhorns is LaMarcus Aldridge. The sharp-shooting power forward had spent most of his career in Portland until this season, when he left for the San Antonio Spurs in free agency. Aldridge is considered one of the best big men in the NBA and has averaged 19 points over his entire career. LaMarcus was selected second overall by the Chicago Bulls in the 2006 NBA Draft and then traded to the Portland Trailblazers for the rights to forward Tyrus Thomas. The Bulls are still kicking themselves for making that draft-day trade. The other former Longhorn that was picked second overall was Kevin Durant. KD, as he is nicknamed, has been a scoring machine ever since he entered the NBA for the then Seattle Supersonics, never averaging below 20 points per game. And as the team has evolved in Oklahoma City after the move following his rookie season, Durant has matured and become one of the Top 5 players in the NBA. He has averaged 27.4 points per game in his career and has made one NBA Finals appearance so far. Throw Jason Kidd into the mix with these three and you have four players that were excellent and will end up being Basketball Hall of Famers.

Mourning, Durant, Aldridge and Kidd have all had success as the second overall pick since 1992, but there have been quite a few duds that have landed at that position. The names Darko Milicic and Emeka Okafor definitely come to mind. But these two are just the start of the list. One guy that heads up this list is Hasheem Thabeet. NBA scouts were enamoured by his size and his defensive abilities when he was headed to the 2009 NBA Draft. Many looked at him and saw him as a game-changer that would have a long career. Unfortunately for him, he ended up having one of the more disappointing careers of the second overall picks the last 25 years. And as quickly as his NBA career started, it was over. He made it seven years in the NBA, but his mark was minimal on the NBA, only averaging 2.2 points per game in his career. And that defensive impact he was supposed to have never happened. He did not even average one block per game or three rebounds in his career. But along with Thabeet, there was another second overall pick that did not live up to the expectations. His name was Stromile Swift. Coming out of LSU, Swift was talked about. His athletic ability was something that scouts drooled over. And if he were ever to put it all together with his size, plenty believed he would definitely have a productive career in the NBA. Well, Swift was selected by the Grizzlies in hopes that he would put it together for them. Unfortunately, he never did. Swift had two seasons of double-digit points per game in his career and was largely invisible for his career. He may have lasted for ten seasons in the NBA, but he just was not that memorable on the court. He never really lived up to the hype that preceded him before he was drafted into the NBA. Thabeet and Swift are featured here, but Keith Van Horn, Jay Williams, Marvin Williams and Michael Beasley could have easily been mentioned. But no need to bring them in when you have Thabeet and Swift telling the story already.

The second overall pick will be something that will be looked at as the consolation prize in the draft this year. Even if it is Simmons or Ingram, there will still be a great consolation prize for the team picking second. But like was stated here, there can be hits and of course there can be misses. And somewhere in between, there will fall some productive players. But when you select a player second overall, you expect them to be a franchise-changer. Over the last 25 years, the franchise-changer has not happened as often as teams may have liked at that pick. And sometimes, the player that is picked second has affected the teams they were picked by in a negative way. Essentially, it is all up to your scouting department and what they are able to determine. For the team that has the second pick this season, hopefully they end up having some success with that. The Bucks and Lakers have had solid play out of their second overall picks (Jabari Parker and D’Angelo Russell) the last two seasons. We will see what happens with this year’s second overall pick. But for what it’s worth, I would not expect a star at that pick.