LeBron James is a better human being than player

LeBron James is the best basketball player in the world even at 32 years old. He had the best postseason he has had in career, averaging 34 points, nine rebounds and nine assists as he led the Cleveland Cavaliers to the NBA Finals. And now after taking the Cavaliers to great heights in the four years he was back there,  he is headed to the Los Angeles Lakers. LeBron with that young team and the veterans they have acquired is going to be interesting to watch and something that could blow up considering the veterans they have around this team. Away from that, there are many getting on LeBron's case about joining another team. These same people talk about how they don't like his game, how he's overrated and how he is not even anywhere near the discussion of being the G.O.A.T. The debates when it comes to LeBron James the basketball player have been going on for a long time, but what has never been debated over the last few years is LeBron the human being.

Over the years, LeBron has grown from a young man in Akron to a grown man standing for what he believes is right. He has said things and made statements with his voice and his actions, but one of the most powerful things he did just recently is opening up a school. The I Promise School opened up in Akron on Monday and will be the home of third and fourth graders this school year. It may only have third and fourth graders at this point, but by the year 2022, it is supposed to have kids there from the first grade to the eighth grade. All kids have been identified as at-risk kids and the design of the school is to help them as much as possible. In addition to longer days at the school, there will be free uniforms for the kids, free bicycle and helmets, free transportation within two miles and free breakfast, lunch and snacks. The school is putting everything in place so kids will not have to worry about where their next meal will come from or what they are going to wear to school. Those things have been eliminated from their minds so they can focus on one thing alone: learning.

The school is focused on the kids, but the learning does not stop there. In addition to offering a food pantry for families of kids at the school, LeBron's I Promise school is also offering GEDs and job placement services for the parents of students at the school. That may not sound like a lot for people, but it is huge when it comes to a community. There are kids coming to this school that have parents that are struggling more than living paycheck to paycheck. Some of them have parents that are not sure how the lights will be on let alone where the next meal could come from. With job placement and GED offers to parents, LeBron and his foundation are putting their best foot forward to change the cycle of life for families. That type of commitment is huge. And add this that every kid that finishes the I Promise school will have free tuition to college and it relieves stress families would have in regards to how a kid could pay for college.

The I Promise School is much more than a school, but a potential life-changer for families in the Akron area. His game put Akron on the map, but he has leveraged that fame to take his hometown to even higher levels economically and socially. LeBron James the basketball player is great, but LeBron James the human being is even better. 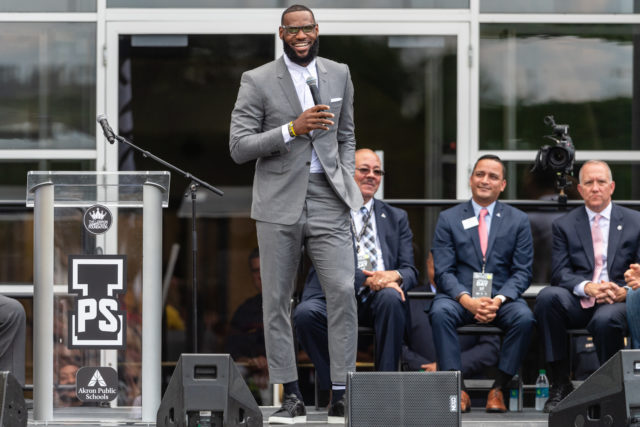