Could The Lakers Land Another Star Very Soon?

The Los Angeles Lakers are coming off one of their most disappointing seasons in team history. But there is light at the end of the tunnel for the Lakers. People finally got to see the talent that power forward Julius Randle possessed. Guard D’Angelo Russell showed in spurts what he could be for the Lakers down the line. And guard Jordan Clarkson showed that he can be another piece to their puzzle as well. And the great thing for all these young pieces is they have fired their former head coach, Byron Scott. For as talented as Russell, Clarkson and Randle are, you would never notice it with how Scott never let them just run and play. The best thing for young players is playing time. In that time, they can learn from their mistakes and grow as players. He essentially was stunting their growth. Enters Luke Walton, who will be the youngest head coach in the NBA next season and will likely inherit a top three pick as a result of losing a lot this season. The full rebuild is on with Kobe now retired. But there could be a rapid rebuild plan in place? If you hear the latest rumor than it is possible.

Of course, the Lakers will have a big amount of cap space this summer and could go in that direction. But that direction could change depending on the bounce of a few ping pong balls. If the Lakers are able to keep their pick (if their pick is in the Top Three, then they are able to keep it), then that gives the Lakers a chance at getting a top talent like LSU’s Ben Simmons or Duke’s Brandon Ingram. But rumors are swirling that the Lakers could use that pick as bait to get a star player if obtained. There have been stars like Oklahoma City’s Kevin Durant and Russell Westbrook and Toronto’s DeMar Derozan mentioned in rumors to come to Lakerland via free agency. But by obtaining the all-important pick, it allows the Lakers to pursue a top talent via trade. And apparently the rumor mill there seems to be focused on current Indiana Pacers small forward Paul George. The latest scenario mentions George heading to Los Angeles for one of the top three talents on the Lakers and that 2016 draft pick they could get. With his addition, that would probably mean that either Clarkson or Russell would be heading to Indiana.

George would be a welcomed addition to the Lakers. He would give them a consistent scorer on the perimeter that they have not had in a couple years. He would also give them a player that can lace it up and defend the opponent’s best perimeter player. That type of two-way player is worth his weight in gold in the NBA and the Lakers would be in possession of his talents. And with the talent still there around him, the Lakers would be competitive for a playoff spot at least. Randle would be solid in Walton’s system. Sure, he still has to continue growing as a player, but he also does some things that can benefit Walton. He can not only rebound, but he can push the ball up the court on his own and make plays for himself and others. If he is able to perfect that jump shot and his right hand, then Randle will continue to become the player that many think he will become. And in some aspects, he has skills that can compare him to a Draymond Green-type in the Lakers offense. He cannot shoot with range like Green, but he can sure pass and push the basketball like him.

The big question if all falls into place is whether the Pacers want Clarkson or Russell. On one hand, Clarkson is a talented player. He can score, pass and he can defend as well. And the great thing about him is he has the size to play the shooting guard position as well as the point guard position. With him joining Indiana, he could probably average 20 points per game and be a very solid player for the Pacers to go alongside young big man Myles Turner and veteran guard Monta Ellis. Randle sounds really solid, but Russell is a talented young man as well. He can pass, shoot and defend as well. But the one difference is his vision is better than Clarkson’s. He could get his points while getting everyone around him involved. That type of guard would be a good thing for the Pacers and would fit what they would want to do. Put him beside Monta Ellis and those two could play off each other and also make their backcourt bigger by Russell replacing George Hill in the starting lineup. And like Clarkson’s addition, the Pacers would be in line to make the playoffs with the addition of Russell. If the Lakers have their choice, they probably would keep Russell over Clarkson due to his court vision and the fact that the Lakers don’t have to pay him like they do Clarkson this offseason. But the reality is that Russell is probably more coveted than Clarkson despite the video incident that happened this year involving Lakers teammate Nick Young. And because of that, Russell is the more likely candidate to leave should Paul George land in LA.

The Lakers have been missing in the playoffs for a while now and that is unacceptable, especially to Lakers part owner and President Jeanie Buss and the Lakers fans. And as far as her brother and part owner/Vice President, Jim Buss, he is feeling the heat to make the playoffs and be a contender from Jeanie. After all, he did say that if the Lakers were not a contender at the end of 2017 that he would step down from his position. Hey Jim, 2017 is next season. You had better come through or get your office cleaned out sir. This move could help jump start that slow move towards a contender you’ve been making. 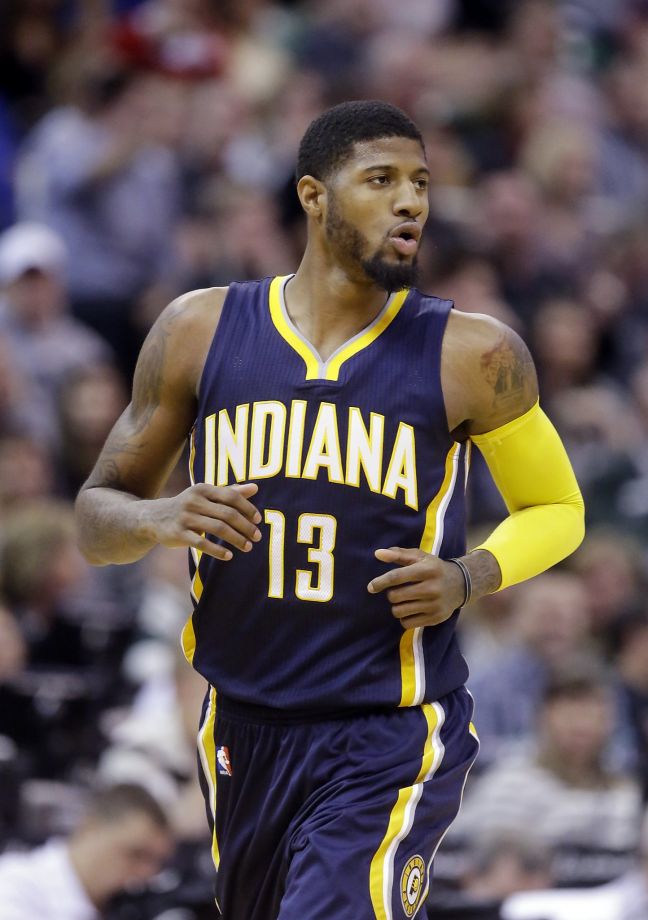