The Chicago Bulls entered this year with that ugly word that no fan wants to hear about their team hovering around: rebuild. Yes, the Bulls are definitely in a rebuilding phase and Phase One is going to be a painful one for them. Gone are marquee players like Dwyane Wade and Jimmy Butler to lead the way and a new crew led by rookie forward Lauri Markkanen were charged with leading the way to the next era in Bulls basketball. As the Bulls currently sit right now, they are 6-20. The bad thing is their record is bad but the good thing is they have won three straight games. A part of that surge in the last three games has been the play at the point guard spot. One thing that will help the rebuild in Chicago speed along is the development at the point guard spot. At the beginning of the season, the situation was muddled up, but as of the last few games, the question is starting to get a clear answer and it was one that some Bulls fans hoped for.

When the Bulls traded Jimmy Butler to the Minnesota Timberwolves, there was some grumbling. After all, Butler was the best player on the team and there was no one that could replace him immediately that was received in the trade. While the grumbling was going on, the Bulls received back some pieces (along with the draft pick that turned into Markkanen) that intrigued some around the NBA circuit. One name that caught a lot of attention was Zach LaVine. The talented shooting guard tore his ACL in the 2016-2017 season, but before he tore his ACL, he was averaging 18.9 points per game. Along with LaVine, the other intriguing piece that was shipped to Chicago was Kris Dunn. The former fifth overall pick of the 2016 NBA draft was highly underwhelming in his rookie season in Minnesota and there was some question as to what he would be in Chicago. Would he do more of what he did in Minnesota or would he make good of his second chance? Well, so far, he has been playing at a better pace than he ever did in Minnesota.

Dunn did not start off the season in the starting lineup as he was injured in the preseason, but as time has gone on, he has found himself in the starting lineup. And with him in the starting lineup, it seems that he has found that confidence that made him a Top Five pick in the 2016 NBA Draft. One thing that was never a question mark about his game was his defense. Dunn is a taller point guard, standing at 6'4", so he uses that length to pester other point guards. His length has allowed him to block shots of opposing point guards, get in passing lanes and force bad shots. Just recently against the Charlotte Hornets, Dunn was primarily responsible for Kemba Walker having a 5/16 shooting night because he was quick enough to guard him and his length drove him crazy. While his defense has been good, his offense has been the surprise of his game so far. Dunn is confidently shooting the midrange jump shot and has had some good shooting games in the month of December while averaging 14.7 points per game. Along with his confident stroke, he has also been valuing the basketball very well in December, averaging 7.2 assists per game while only averaging 2.3  turnovers a game. For a team looking for their next lead guard, it is very encouraging that they are getting scoring, passing and good defense from a young player that is only going to get better.

Chicago is a team looking for answers and it seems like they may have found one at the point guard spot in Dunn. The team has won three straight and is looking forward to the return of LaVine from injury. When you get those two back with Markkanen, then you could be looking at pieces that are the core of the next era of the Chicago Bulls. Only time will tell, but you have to be happy for Dunn and the way he bounced back from a disappointing rookie season. The Bulls looked like they lost a lot in the trade to start, but they could eventually earn three starters out of this deal, which could be huge for them as the rebuild continues in Chicago. 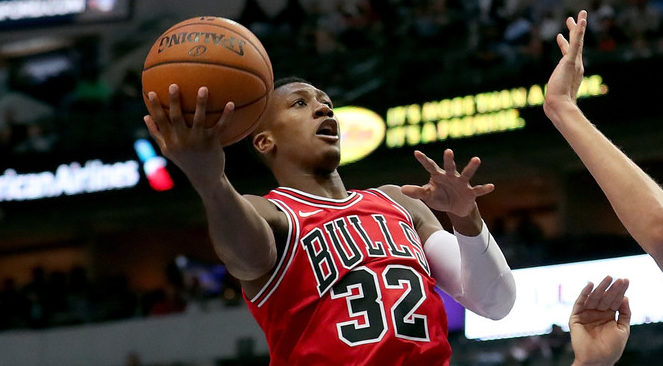