The Disappearance Of Kevin Love

The Cleveland Cavaliers were rolling after two games in the Eastern Conference Finals. They were not shooting the basketball as well as they were against Atlanta from the three-point line, but they were attacking the rim with reckless abandon. Kevin Love, LeBron James and Kyrie Irving were playing great and it looked as if the Cavaliers were going to dominate the series versus the Toronto Raptors. And as they headed to Game 3, many wondered would Toronto put up any restistance. Well, they have done more than put up resistance, as they have won the last two games and changed the face of this series. And as far as the Cavaliers and their Big Three, only two of them showed up in Canada. LeBron James was solid. He scored, passed and rebounded well enough to at least win one of the games in Toronto. As far as Kyrie, he was absent in Game 3, going 3-19 from the field. But in Game 4, he shook off the doldrums and made some big baskets to pull the Cavaliers within striking range before they fell. But one member of the Big Three seemingly left his game at Quicken Loans Arena in Cleveland and is name is Kevin Love.

Kevin Love has been very good in the playoffs for the Cavaliers. And after Game 2 of this series, Love was averaging 16.5 points per game and shooting it at a 56% clip. Love was also shooting 50% from three-point range. But with a change of scenery, it seems his aggressiveness and shot-making has left as well. Love may as well have been sitting on the bench all game in Game 3, as he was non-existent and went 1-9 from the field. And that three-point shooting percentage he had the first two games was destroyed by his combined 3/11 from deep. He had a total of only 13 points in the last two games. And when Love's offense is not going well, it seems to take the energy out of the rest of his game. For the Cavaliers to win the series, they cannot have this type of performance out of Love. Cavaliers head coach Tyronn Lue had enough of Love in Game 4 and sat him out in the fourth quarter of the game as Cleveland made a run. Many thought that was due to injury, but Lue went on to say that Love could have come back into the game and that it was a coach's decision to have him not play again in the game. For the Cavs to win this series, they will need Love to show up. Going back home should help that, but there has to be some other adjustments made by Cleveland and Love.

One big adjustment has to be the way Love gets involved in the game. In the Atlanta series, the Cavs were hitting the three so much that it took them out of the way they got Love involved in games usually. What Cleveland had been doing to start games is getting Love the ball at the mid to low post and letting him operate. That gets him involved in the offense even more than he is at this point because he has been essentially a spot-up shooter. But when Love is there, he also has to be more aggressive towards the rim. The fadeaways are nice, but they don't get you to the free throw line. Love shot 13 free throws in the first two games and since then, he has not shot one. That tells me that he is being passive and that also tells me that he is not really involved at all offensively. Another thing that Love has to do is fight more on the defensive boards. Many times, it seems like he is just hanging out in the paint on the defensive end instead of being an active participant. Tristian Thompson is a very good rebounder, but he needs his fellow big man to step in and help him out. Without his help, Bismack Biyombo has been giving Thompson a whole bunch of trouble. And that has led to Biyombo being a piece of what has helped change the complexion of this series. The more he gets involved offensively, the better he will be on the defensive end, so Lue, LeBron James and Kyrie Irving have to force him into the game.

A pivotal Game 5 is coming up and Cleveland will need all hands on deck to gain some control in this series again. Love has to be one of those hands on deck and he cannot be a bystander for them to win this series. He was missing in action in Toronto, but will a return to Cleveland mean an appearance of the Kevin Love we have seen for most of the playoffs? Only Kevin Love and the Cavaliers know that answer. He was brought to Cleveland to help them win a title. Well, here is his chance to step up and help them get in position to advance to the championship round again. 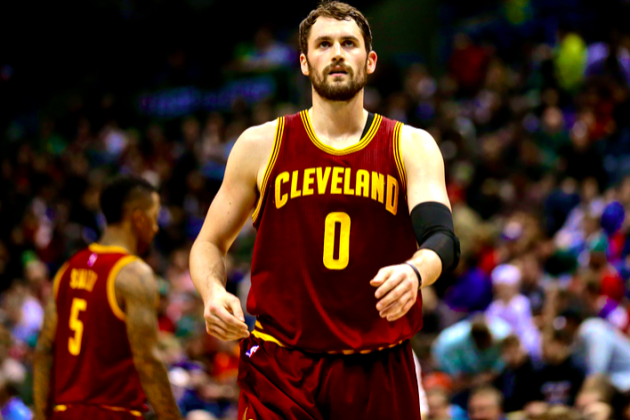