The Oklahoma City Thunder were not given much of a chance entering the Western Conference Finals versus the Golden State Warriors. In fact, there was talk that they were going to be swept or lose in five games by many. But the Thunder had other ideas. Oklahoma City came out and took Game 1, surprising a lot of people. And although they lost Game 2 by a big margin, many have changed their tunes and think this could be a series. The Thunder, of course, are led by Russell Westbrook and Kevin Durant. The dynamic duo made clutch plays in Game 1 and led the Thunder to the win. But in Game 2, it seemed like Russell just could not get going to help Durant with the scoring load. Even with the bad performance in Game 2, the hope for the Thunder is high heading back home to Oklahoma City. The energy will be high in the arena Sunday and that energy could carry the Thunder for some of the game. In a perfect world for Oklahoma City, they would win both games at home. But for that to come true, the Thunder need Kevin Durant to be even better than he has been.

Kevin Durant has put up some very good scoring and rebounding numbers in this series. He has averaged 27.5 points per game while grabbing eight rebounds per game. But his turnovers have been not so good. People are usually talking about Russell Westbrook as the guy that needs to get a handle on his turnovers. Everyone knows the heat he takes all the time for shooting like he does and the turnovers. But in this series, he actually has been under control, averaging 12 assists per game to only three turnovers per game. For Westbrook, that is phenomenal point guard play. But for as much as he is valuing the basketball, Kevin Durant surely is not. The talented small forward averaged five assists to four turnovers during the regular season. That isn't exactly great numbers, but his assist-to-turnover ratio was in the positive. But in this series, it seems like Durant just cannot make the right decisions with the basketball. He is averaging two assists and a horrid 6.5 assists per game versus the Warriors. The bad thing about a lot of those turnovers is they have helped start some fast breaks for the Warriors, giving them easy baskets. In order for the Thunder to win Game 3 and have a legitimate chance to win this series, he has to protect the basketball more. We all know Durant is a scorer, but that amount of turnovers is unacceptable.

The closer for the Oklahoma City Thunder is supposed to be Kevin Durant. He has hit big shots time and time again for the Thunder down the stretch. And to his credit, he has been calling for the basketball down the stretch of games. But in Game 1 of this series versus the Golden State Warriors, he seemingly was trying to throw the game away. The Thunder had the lead and were just trying to ice the game away. All they had to do was get a few baskets to make sure and bury Golden State. But what happened with Durant down the stretch was something that had to give Oklahoma City fans a trepidation. Kevin Durant was getting the basketball, but he was taking some tough shots to try and finish off the Warriors and he hit maybe one of those shots. The thing about a lot of these shots is that Kevin Durant forced them and made them hard. He did not have to take any of those shots when he did. But he chose to take the hard shot instead of making the better play. The smart thing would have been for him to use his length and take the ball to the basket. And that point, you force Golden State to defend you at the rim and that more than likely would have led to a foul call on the Warriors. It may have stopped the clock, but it would have given Oklahoma City more chances for free throws, which is a great thing for Durant. In Game 3, Durant has to finish better should the Thunder be up late in the game. If he does not, then there could be another game where Oklahoma City snatches defeat from the jaws of victory.

Kevin Durant has put up excellent scoring numbers in this series and hit some big shots. But he has also fumbled the ball a lot and taken bad shots trying to close out the game. He has to step it up and play better than he has despite what the numbers tell us. If they want to win the series, he has to tighten up all areas of his game and become that unstoppable player that he can be at times. 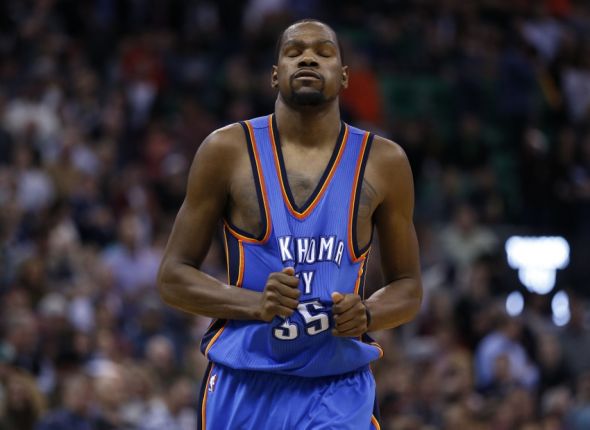