The New York Knicks were looking to add to their core this offseason. They had Kristaps Porzingis and Carmelo Anthony, but not much after that. They had to make some changes and had to make them now. After all, there is only so much of the losing they were doing that Knicks fans can stand. So in lieu of them wanting to make something happen, the Knicks traded away a few pieces they did not want anymore (guards Jerian Grant and Jose Calderon along with center Robin Lopez) for the services of Derrick Rose. Essentially, the deal sends Rose to a new market for a fresh start and sends back the Bulls at least two players they may not have a future for. But the Knicks showed that was not all they wanted to do when they began free agency. They immediately contacted Chicago center Joakim Noah near the time for verbal agreements and trades would happen. And just like that, Noah and the New York Knicks agreed to a four-year, $72 million deal to bring the hometown kid home. And for the Knicks and what they have, Noah is an excellent fit.

On the offensive end, Noah is not the guy that New York can look towards to score. In fact, he can often times miss layups around the rim. And of course, that can frustrate guards that set him up with easy layups. But even though he cannot score at the rim consistently, he can make some other things happen. Noah is a very solid passer. He actually is such a good passer that he led the Bulls in assists multiple times. And with this team, they need someone that can move the basketball and hit open players. If the Knicks run the Triangle offense, then he would be perfect for passing the ball out of the post along with finding open teammates from the elbow in the high post. Having Noah have the basketball up top allows for Rose to have some pressure relieved on him handling the basketball, which could help him get more involved with scoring a little more. And as far as Carmelo, Noah's passing may be able to get him some easy buckets instead of some of the tough post ups that he does. But not only does he pass very well, but he rebounds well on the offensive end. Looking at his career, Noah has averaged over three offensive rebounds per game every year but his first year. That comes in handy when you need that clutch offensive board down the stretch. And the advantage he would create there would allow for the basketball to be pushed more this year.

Defensively, Noah has always been very solid. When he first got into the league, you wondered what was he going to be great at. Well, he gives so much effort and that spills out on the defensive end of the court. Noah is always there at the rim, trying to get a piece of a shot going up. And he can get them from time to time. But what makes Noah special defensively is his ability to guard multiple positions. The former Defensive Player of the Year can guard anywhere from post men to guards on the win and he can keep up with the guards and forwards as well. Being able to do this negates when teams try to run pick and rolls to isolate their gaurds against the bigs of the opposing team. And not only does he guard multiple positions, but he is a great communicator and helper on defense. You always hear of the quarterback on offense in football, well there is a quarterback of the defense in basketball as well. Noah has been known over his career to get his defense in the right positions to succeed. And even when they may miss an assignment, he is still good enough to make up for that assignment and prevent the play. Playing with Carmelo Anthony will put his communication defensively and his helpside defense to the test. But if anyone can do it, it would be Joakim Noah.

Offensive and defensively, Noah is an upgrade over Robin Lopez. Both are very good defenders and rebounders, but Noah gives the Knicks more in terms of passing and versatility on defense. Of course, the big issue with Noah has been his heath and could he sustain over time. Well, only time can tell us how good he can be in New York and how recovered from his injury he is. But for now, Noah has a new residence and it is New York City. He is going back home. 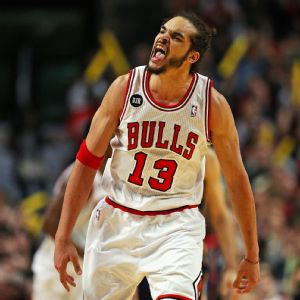