"His palms are sweaty, knees weak, arms are heavy." No, we are not going down Eight Mile and trying to lose ourselves today. Battle rap has been around long before Eminem made the movie that mirrored his life. The great thing about battle rap is there is no preparation for it. The beautiful similes, metaphors and vivid imagery that is created comes from the innermost sanctum of one's brain. Two combatants go into this one essentially as a test of their creativity as artists. The goal of this battle; ultimate victory. There are no rules to the battle at all. Any and everything can be said and there are no boundaries that cannot be crossed. Your family, your friends, your life are all at play. One, maybe two rounds in a battle squarely judged by the crowd that is there. The more digs and lyrical greatness that can be fit in the better, as the winner controls the crowd. Battles like this end civil most of the time. The winner leaves with props from everyone while the loser is left to figure it out for his next time up. LeBron James and Charles Barkley surely aren't battle rappers, but it seems like they are surely swinging for the fences as they try to move the crowd.

Over the month of January the Cavaliers have gone 7-8, which is one of the worst months that any team LeBron has been on has had. When you are used to winning, frustration can come and LeBron is not any exception. He has more recently let his frustrations boil over with his talk about his team's need for another playmaker. Honestly, he is completely accurate with what he said about his team. James is the backup point guard on the Cavs and he is playing a ton of minutes every single game. The Cavs do not have a playmaker in their second unit that can take some stress off he and Kyrie Irving. But the problem with LeBron voicing his frustration is that he did it in the public eye, ruffling the feathers of his team and irking those around the game. One group that talked about it recently was the TNT crew. The one guy that's the lightning rod both good and bad is Charles Barkley. And never one to shy away, Barkley had his thoughts on LeBron and his comments, "Inappropriate. Whiny. All of the above. The Cleveland Cavaliers have the highest payroll in NBA history. He wanted J.R. Smith last summer, they paid him. He wanted Iman Shumpert last summer. They brought in Kyle Korver. He's the best player in the world. Does he want all the good players? He don't want to compete?" Barkley had some truth in what he said. The Cavaliers do have the highest payroll out there, they did pay people that LeBron wanted and LeBron is being a little whiny in his frustration. But where he may not have understood things is where he talked about LeBron not wanting to compete or wanting all the good players. LeBron wants to compete and he wants to win another title. The one thing that this team misses that it had last season was a guy that could make plays for others outside of LeBron and Kyrie Irving. That is why both Irving and James have to play so much and that is where Charles needs to put on his analyst hat and recognize. So in essence, Charles was right in a lot of what he said. But he had some wrongs too.

The comments from Charles got the exact results that a combatant would get as he slays his opponent to open the competition. But like anything, there is always the time for the challenger to fight back. And although it took a second, LeBron James finally responded. After a loss to the Dallas Mavericks Monday night, LeBron James had some words in regards to Charles Barkley and his comments: "He's a hater. What makes what he said credible? I'm not going to let him disrespect my legacy like that. I'm not the one who threw someone through a window. I never spit on a kid. I never had unpaid debt in Las Vegas.  I never said, 'I am not a role model.' I never showed up to All-Star weekend on Sunday because I was in Vegas all weekend partying. All I've done my entire career is represent the NBA the right way. Fourteen years, never got in trouble. Respect the game. Print that." LeBron basically talked about facts in Barkley's tumultuous career off the court like he was B Rabbit spitting at Papa Doc at the end of Eight Mile. While LeBron was completely accurate in what he said about Charles' tumultuous career off the court, it was more of a personal attack. Many have talked about how it came across that way and quite honestly, that was somewhere no one expected LeBron to go and he did. No one knows what set him off the most to respond this way. Maybe he got tired of taking the high road and decided he was going to come out swinging or maybe the comments about him not wanting to compete struck a nerve.  This isn't the first rodeo that Barkley and James have had. Barkley has criticized James over and over again in his career as an analyst and James has never responded. But with the combination of this and the losing seemed to have sent him over the edge, prompting him to talk personal about Barkley. It wasn't probably the right thing to do, but James did what he felt he had to do. Anytime you're an analyst and you dog someone, you have exposed your chest for someome to punch you in it.

Round one is in and there are some that are saying James one the round while others are siding with Barkley. In the end, Charles has a job to do and he did it. But there are some underlying tones to this one that no one is speaking on. The tone of the old school players versus the new school cats has been there for a while now and with this one, it only intensifies the battle they have had. And for LeBron and Charles specifically, both have bumped heads ever since he went to Miami. LeBron has been silent since then and it eventually boiled over. But one thing that was interesting is LeBron invited Charles to not do the usual smile and handshake at the all-star game but to actually talk to him. In that, maybe these two come to an understanding. But in my opinion, Charles will probably do his usual and James will continue to move around like the most powerful player in the game. Two ships passing in the night until their next bout for rap battle supremacy happens. The mics have hit the floor. The battle is over....for now. 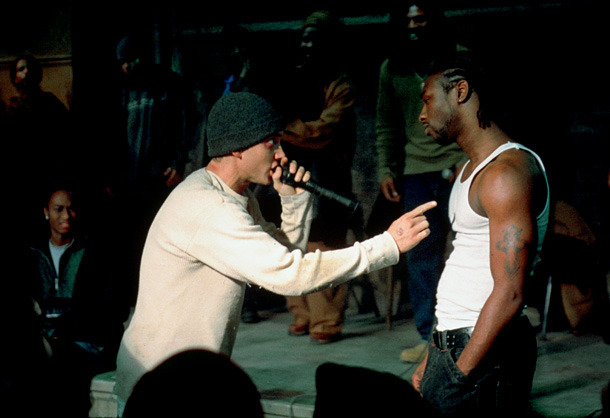