What To Do With Isaiah Thomas

The Boston Celtics were nowhere near in the series to start the Eastern Conference Finals. They were getting tormented by the Cleveland Cavaliers in front of their home crowd. After their second loss, a 44 point shellacking, the Celtics were thought to be dead in the water. Along with the embarrassing second loss, the Celtics lost star guard Isaiah Thomas to a hip injury that would have him out the rest of the playoffs. At that point, no one was giving the Celtics a chance to even win a game. Then Game 3 happened and the Celtics pulled off an improbable 111-108 win in Cleveland behind the strength of Marcus Smart, who replaced Isaiah Thomas in the starting lineup, and Avery Bradley. The result of that game shocked everyone. The Celtics won that game when no one even thought they could. In that win, people began to visit the thoughts of the Celtics without Isaiah Thomas. The team seemed to play more free on the offensive side of the ball and that paid off for them. Along with that freedom offensively, the team also defended the basketball better. The surge of good play began to remind folks that Isaiah Thomas was once on the market to be had via trade. Of course that did not happen and he went on to have a great season, but that talk is starting to have legs again as we head towards the NBA Draft.

Isaiah Thomas will be free agent in 2018 and that means that he is entering a contract year. The decision now falls upon the Celtics as to what they want to do. It is no secret that University of Washington guard Markelle Fultz is more than likely going to be the number one overall pick. With him coming there, that would make one player expendable and that player could very well end up being Thomas. Although Thomas has said that both he and Fultz can coexist together, the reality is that contract issues and the feeling the Celtics get there could force their hand to make a move. If Thomas and his representatives put out there that they want a contract that fits with what the Celtics want to pay, then he will more than likely remain in Boston. Fultz will be more than likely drafted, but at what point does that make sense if Thomas is still there? If the Celtics are really serious about trying to make the next progression, they need a rim protector and another playmaker on the perimeter. The Celtics have more than enough money to throw at pending free agent forward Gordon Heyward. The talented wing player played college basketball for current Celtics head coach Brad Stevens and that would be a huge get for them. As for the rim protector, there are not very many available to go get to be honest. But there is one team that would be interested in moving a big man and that team would be the Orlando Magic. Bismack Biyombo was brought to Orlando to block shots and set the tone defensively as a center. Well, he has not done that much there as the Magic have lost, but his rim protection and rebounding would be welcomed in Boston. And along with his acquisition, Horford could permanently move to the power forward position. An upgrade of Heyward and Biyombo would make the Celtics tougher and more of a threat to the Cleveland Cavaliers in the NBA's Eastern Conference. The downside of the trade is that Boston would have to give up some pieces that could help them next season. Probably not the 1st overall pick they would have to give up for Biyombo, but some pieces that are currently there like Marcus Smart, Jae Crowder or Avery Bradley.

The idea of adding pieces to this team a d keeping Isaiah would be exactly what the Celtics fan base would love to hear. However, there is also the idea that this team's backcourt could look different next year. The reality is that you cannot build around the scoring of a smallish point guard. While he is very talented, he is also a guy that can be bottled up by bigger guards when it really counts, as shown against the Cavaliers when he was playing the first two games in the Eastern Conference Finals. Moving him would be risky, but it would also be something that would not surprise many at all. Plenty of teams move people when they cannot come to agreements. Thomas moving along would definitely make the selection of Markelle Fultz make even more sense, but it would not help them achieve the level of play that could help them compete with Cleveland. The Celtics would more than likely move Marcus Smart(if he's not traded) into the starting point guard position if they trade Thomas and that would be a downgrade. Smart plays with heart and desire, but he is not the scorer nor shooter that Thomas is. The Celtics could still get Heyward in all this regardless, but the move to Boston for him could become one that would not be as attractive without another perimeter weapon beside him. In the trade market, Thomas may not net them exactly what they want in terms of players needed right now, but he can net them a first-round draft pick though, which could help them down the line. While that sounds good for the long-term future of this team, that will not help them get anywhere closer to catching Cleveland.

The Celtics are in a great position to make some things happen. But of course, that all can center around what they do or don't do with Isaiah Thomas. They could sign him long-term and add some pieces. The Celtics could also trade him and move forward. Along with keeping the first overall pick, they could trade it and get a huge star like Jimmy Butler or Paul George, but they also could keep it and draft Markelle Fultz. All in all, this summer will be a huge one for the Celtics in their aspirations to return to the NBA Finals like they did with Ray Allen, Kevin Garnett and Paul Pierce. But in order for them to do so, Ainge definitely has to make some decisions that he may not want to. The good thing for him is he has a ton of things at his disposal. We shall see what happens, but this Celtics team could look similar next year or take on a different personality next year. It is all dependent on what Ainge sees. 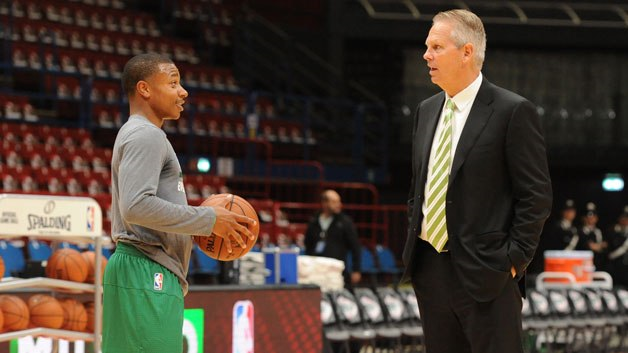