The Indiana Pacers entered the 2015-2016 season trying to get back in the playoffs. The previous season, the Pacers missed their star, forward Paul George, for most of the season as he recovered from a gruesome leg injury. With the addition of Monta Ellis and first-round pick Myles Turner, the Pacers were expected to be back in the playoffs. And even though they struggled, they made it and secured the seventh seed. They would take the Toronto Raptors to seven games before losing the series. After the way they finished, you would think they would have kept head coach Frank Vogel to build upon the small ball lineup that he started using in line with what Pacers president Larry Bird wanted. But Vogel was surprisingly jettisoned and the Pacers promoted their head coach. The thought was that he was not the guy to take the Pacers to the next level. The Pacers promoted lead assistant Nate McMillan as the first change this offseason, but little did we know that more was coming from Bird.

The Pacers were sorely lacking at the point guard position last year. Despite averaging 12 points per game, veteran point guard George Hill was not exactly the right fit there for the Pacers. He would disappear at times and he has never really been a good distributor. That kind of point guard cannot get the ball to players in positions they need it. And as a result, we got to see some Monta Ellis at point guard in the postseason (which is not a good thing). So noticing this weakness, Larry Bird facilitated a trade to between them, the Utah Jazz and the Atlanta Hawks that landed them point guard Jeff Teague from the Hawks. Adding him gives the Pacers more scoring punch from that position (15.7 points per game last season) and he also averaged a two-to-one assist-to-turnover ratio. Teague's numbers may have slipped slightly from 2014-2015 to last season, but even then he is an upgrade at the position for the Pacers. Having him will help the Pacers get better. And what's even better is Teague did more damage on the court than Hill and he played less minutes than him.

But Teague coming to town was not the only thing that changed. The Pacers were a small ball team last season. But even with that, the Pacers were still lacking a power forward that could fit that type of offense. They tried a few things there, even going with Solomon Hill at that position a few times off the bench. Seeing that he still wanted to go small, Bird made another deal to shape his team. He reached out to the Nets and traded them the 20th pick in the 2016 Draft for forward Thaddeus Young. With his addition, the Pacers now have a guy that has always been considered too small for the power forward position consistently and too bad a three-point shooter to be a permanent small forward. His addition gives the Pacers a versatile guy up front that can create matchup problems. And whether he comes in off the bench or plays alongside Myles Turner in the frontcourt, he helps the Pacers get even more uptempo. And with his scoring at the power forward spot or as a guy off the bench, the Pacers will be better off than they were before.

Finally, Bird wanted to add a true post threat to the mix in Indy. They played Myles Turner at the center position last season, but he clearly would be better at the power forward position. With that being said, the Pacers were in need of a center. And this time they went to the free agency pool to get one. The Pacers and free agent center Al Jefferson agreed to a three-year, $30 million deal to bring him to the Circle City. In adding him, the Pacers now have someone to throw the basketball too inside when the offense bogs down. He may not be great defensively, the offense he can provide inside will be a welcome addition to Indiana (Jefferson has averaged a little under 17 points in his career). And if he really gets going, he will draw a double team to get shots for guys like Teague, Turner and Paul George.

The Pacers filled their holes they had last season with upgrades. Teague is a better point guard than George Hill. Thaddeus Young is better than Lavoy Allen. And Al Jefferson is better than anyone they had at that position. The Pacers might not be done making moves, but they surely equipped themselves better than they were last year. And even though it may be a tough road to climb, the Pacers have definitely made a move to try and help them ascend to the top of the East. 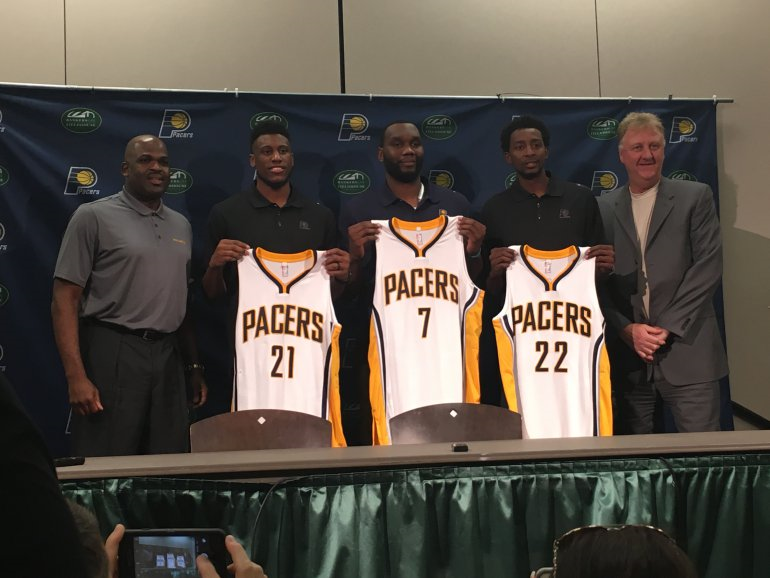