The Indiana Pacers were not expected to do much this season. They were going into this year with their best player, Paul George, traded away. In that deal, the Pacers received big man Domantas Sabonis  and Victor Oladipo. Immediately, everyone saw the Pacers losing that deal. After all, they received a big man that everyone was not sure how great he was going to be and a wing player that had not yet reached his potential. Well, fast-forward to now and a team that was not expected to be in the playoff hunt is definitely playing well and playing together and Sabonis and Oladipo are right in the midst of the great play. Needless to say, it looks like Indiana may have done a little better in that trade than originally thought.

Coming into this season, no one knew what to expect from Oladipo. He had his moments when in Oklahoma City and Orlando, but he had not been the consistent wing player and potential star that everyone thought he would be. Headings to Indy provided him another fresh start and a chance to make his name. Well, not only has he made a name for himself, some people are even mentioning him as a potential All-Star this year. The talented young guard is shooting a career-high 42.8% from three-point range while postings career-highs in points and rebounds. Not bad for a guy that no one was sure what to expect. He is showing that he can be a lead guard and has helped the Pacers cover up for any missing scoring that left via Paul George. Not only has he done it offensively, but defensively as well. Oladipo has taken on all challengers and fared very well in doing so. Oladipo has taken his third crack at it and along with transforming his body this offseason, he has transformed his game and taken it to the next level.

Along with unexpectedly high-level play of Oladipo, Sabonis has stepped up his play. The second-year big man from Gonzaga has gone from starting in the Thunder's lineup to becoming a bench cog for the Pacers. While that may borrow some players, it has not done much to shatter the confidence of Sabonis. Despite getting only four more minutes of playing time a game, Sabonis has actually flourished more in Indiana. His points per game and rebounds have doubled (from 5.9 points and 3.6 rebounds per game in his rookie season to 12.3 points per game and 8.3 rebounds per game this season). Not only have those numbers gone up, but his shooting percentage has gone up by 15% and he is shooting the three-pointer at 38.5%. Sabonis has become one of the best bench options in the NBA this season and the change of scenery has somehow helped his game grow even more.

The Pacers are where no one expected them to be and before the season, everyone thought if that was to happen, it would be because of Myles Turner. Unbeknownst to NBA fans and Pacers fans, the two acquisitions that everyone clowned the Pacers for taking are actually helping lead the way. Both are key cogs in a quick Pacers rebuild that did not go as bad as plenty expected it to be this season. So while Paul George is trying to still gain traction during the Thunder's struggles, the Pacers are actually playing good basketball and are giving Pacers fans something to look forward to. 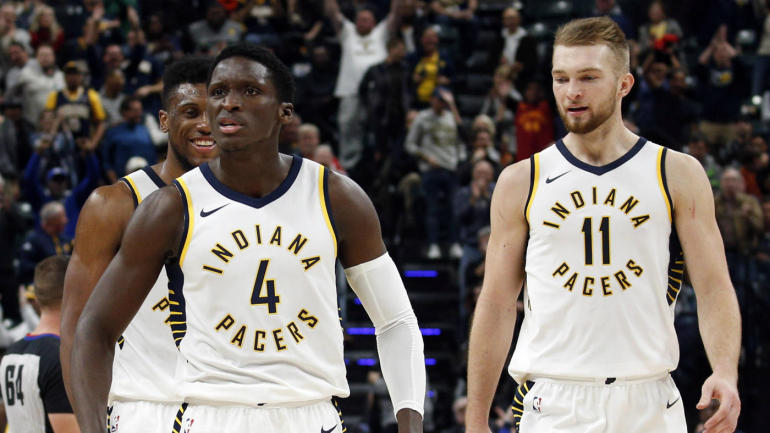