As soon as the matchup between the Thunder and Warriors was announced, there were some feelings put out there all across social media. Some believed that this series would go at least six or seven games with either the Thunder or Warriors winning. And there were others that believed the Warriors were just too good for the Thunder and they would either sweep them or win in five games. Needless to say, many predictions did not have the Thunder doing very well versus Golden State. And going into Game 1, the doubts of the Thunder were getting stronger as they were down by double figures for a good portion of the first half. But with a strong third quarter, led by star point guard Russell Westbrook, the Thunder fought back and eventually overtook the Warriors in the fourth quarter on their way to a 108-102 win. The loss was one that stunned everyone in Oracle Arena, as the crowd was silent as they watched their Warriors lose. But how the loss happened will be something that will bother the Warriors until they play Game 2.

The Thunder were the team that was looked at as turnover-prone. Especially in crunch time, the Thunder have had issues getting good shots and holding on to the basketball. And in the first half, they were very loose with the basketball. But what got overlooked in Game 1 was the turnovers of the Warriors. For the game, the Warriors actually had more turnovers than the Thunder. And in critical times, the Warriors made ball-handling errors that could have usually been swept under the rug because of their great shot-making. One play, we saw Steph Curry going to the basket and trying a behind-the-back pass in traffic at a crucial juncture of the game. That kind of play is not winning basketball, but careless basketball. The Thunder, on the other hand, protected the basketball in the second half of the game. Russell Westbrook had a few issues in the first half shooting the basketball, but he protected the basketball as best as he has the whole playoffs in Game 1. He had twelve assists and only three turnovers for a 4:1 assist-to-turnover ratio. And as a whole, the Thunder just better at protecting the basketball than the Warriors were.

The turnovers were huge and the Thunder converted those into points. But one other thing that hurt the Warriors was the big lineup of the Thunder. Oklahoma City stayed big for most of the first half and that did not hurt them. They were able to make runs and keep the game close although their bigs were getting beat from time to time on mismatches caused by switches. Oklahoma City was doing fine without going small. But when they went small, that is when Oklahoma City got themselves in trouble. The thing that Oklahoma City learned is that they could not try to be like Golden State at all. When teams try to do that, they end up getting themselves in a deeper hole. The reason the Thunder, like all the rest of the teams in the NBA, got in trouble was they don’t have sharpshooters like Klay Thompson and Steph Curry and a utility guy like Draymond Green. But in the second half, the Thunder barely used that lineup at all, choosing to stay with a rotation of Serge Ibaka, Enes Kanter and Steven Adams on the floor. And as a result, the Warriors tried to exploit the big lineup of the Thunder to a fault. When they tried to do that a few different times with Draymond Green, it essentially took them out of their rhythm offensively and led to the anemic shooting we saw from them in the fourth quarter. And as far as the Thunder, they were able to use their size to hurt the Warriors on the boards in the second half along with finishing inside over smaller players.

The bad thing for the Warriors is they looked bad closing out the game Friday night. The good thing for the Warriors is that it was only one game and the Warriors have not lost two games in a row all season long. As far as the adjustments that need to be made, the Warriors have a few that must happen. The first thing is they have to continue to move the basketball. The more the Warriors move the basketball, the easier the shots they will create for themselves. The Warriors cannot get caught up in exploiting matchups in this next game. If they play within themselves, then they should even up the series. If they get caught up in exploiting mismatches instead of moving the basketball like they do, then it could cost them in Game 2. Another thing the Warriors have to do is keep things simple. Too many times, the Warriors were trying to make that fancy play when the simple one would have worked just as easily. If the Warriors value the basketball and make the easy play, then that not only cuts down turnovers, but lessens the times the Thunder are able to get out on the fastbreak. And with the easy baskets not there like they were in the first game, the Thunder could have a tougher time scoring the basketball. There is some game pressure on the Golden State Warriors again. And as we saw in Game 4 of the Portland series, the Warriors responded to the challenge. But the Portland Trailblazers and the Oklahoma City Thunder are two different types of teams with different levels of talent. It will be interesting to see how the Warriors come out and what kind of adjustments they make. 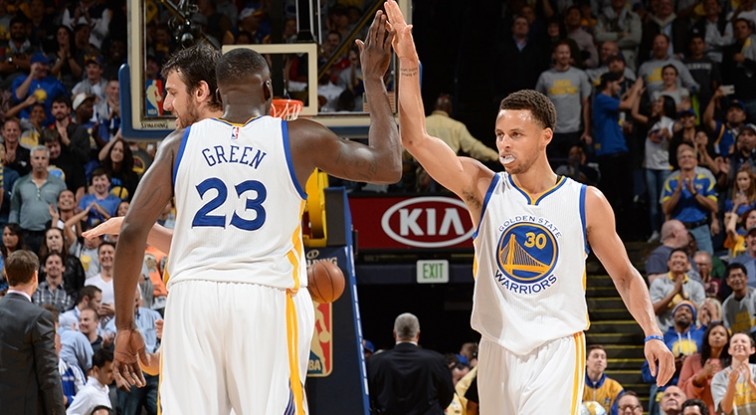