The Golden State Warriors again entered the season with the expectations of winning another title. There were losing streaks, injuries and even some uninspiring play along the way, but eventually, the Warriors one another title. This season, they did not let the Cavs win a game, sweeping LeBron James and Cleveland in four games and celebrating on their floor. The win meant the Warriors have won three titles in four years. Klay Thompson, Draymond Green, Andre Iguodala, Shaun Livingston and Steph Curry have as many rings as LeBron James does in less tries. They are seemingly on top of the world and there are no signs of them slowing down anytime soon since they added Kevin Durant to the mix a couple years ago. With three titles in four seasons, the Warriors now rank as a dynasty and like other dynasties, there are characteristics that go along with it.

This mixture of talent becoming what they are was definitely not something everyone saw coming. The combination of good drafts, smart free agent signings and player development over the years has helped create this monster of a team. And the incredible thing is the core of this team is still in their prime. Durant, Curry, Thompson and Green are all 30 years old or younger and don't seem to be showing any signs of slowing down. Even with teams gearing up to stop them each and every season, they have continued to do what they do and win at an unprecedented clip. The one thing other teams have not been able to duplicate is the chemistry on the court. and the ball movement. The Warriors have had that and have built that over the years because of the continuity of the roster and the fact that some of them grew up there together as NBA players.

The most underrated part of the dynasty is always the coaching. When this team started their run four years ago, they were in the market for a new head coach. They had just fired Mark Jackson and it was coming down to Stan Van Gundy and Steve Kerr. At the time, Kerr was just an analyst on TNT, but he had played in the NBA for a long time and was the general manager of the Phoenix Suns at one point. With that being said, Van Gundy had coaching experience where Kerr had none at all. That did not seem to blind the Warriors, as Kerr ended up getting the gig and leading the Warriors on their way. He has been essentially right on time for Golden State as he has pressed the right buttons over and over again, whether it be lineup changes or adjustments on the floor. And during this season, where the Warriors seemed disinterested at times, he showed again why he was the right man for the job, getting them focused at the right time to finish off their run.

Now the one thing about dynasties is they don't last forever. Eventually someone gets older or personalities clash or of course, the money isn't right at some point. As of right now though, the Warriors are the class of the NBA and no one can figure them out and stop their reign. We shall see what happens this offseason and what teams try to do to solve the puzzle that is Golden State, but as of right now, they are on top of the basketball world and have joined exclusive company with what they have been able to do over the last four seasons. 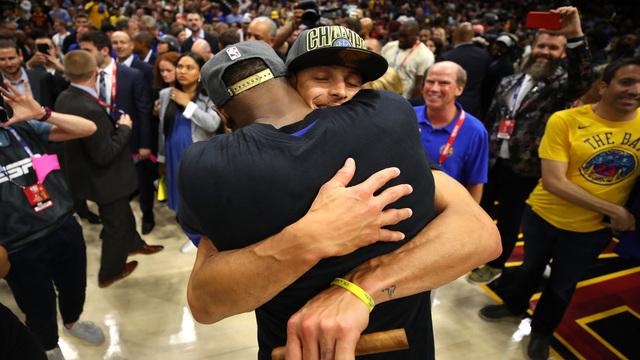