The Milwaukee Bucks were one of the trendy picks to make a move in the Eastern Conference. They finished the year very strong and fought hard until the end of their season versus the Chicago Bulls. Thoughts of them potentially being the darkhorse in the East were tossed out. But then reality and injuries set in. Viewing the Bucks right now, they are currently sitting in 11th place in the East and have no shot of making the playoffs. The great season that was expected seems to have gone up in flames. For whatever reason, the Bucks just could not get it going this year. But in between all the disappointment in Milwaukee, something good came. Season-ending injuries to season-ending injuries to guards OJ Mayo and Michael Carter-Williams have seemingly left the Bucks a little depleted at the guard spot. And because of both being out and Kidd not wanting to make Tyler Ennis or Jerryd Bayless his starting point guards, the Milwaukee Bucks head coach decided that he wanted to try something different. For the first time in his career, Giannis Antetokounmpo is the starting point guard for the Milwaukee Bucks. The Bucks former starting forward is trying something new and so far he is thriving. Head coach Jason Kidd liked what he saw so much that he has said that Antetokounmpo will be the starting point guard heading into the 2016-2017 season.

For the future of the Milwaukee Bucks, this move makes one thing very clear. The Bucks will more than likely be getting rid of their point guard that started this season, Michael Carter-Williams. The 2013-2014 Rookie of the Year was traded to the Milwaukee Bucks last season and it was thought that Kidd would groom him and let him lead his team. But unfortunately, Carter-Williams did not lead the team very well while he was healthy. The ball would seem to get stuck at times on the court instead of flowing freely. And for the season, Carter-Williams had less than averaged less than two assists per each turnover. With Antetokounmpo at point guard, the ball has moved very well. Part of that is because he is 6’11 and can see over opposing point guards or any guard that is defending him. But for his size, he can maneuver the pick and roll well, penetrate the defense and he has good vision. And what else he does better than Carter-Williams at the point guard spot is not turn the ball over. He has had a few games at point guard where he has not turned the ball over and in one of those games, he had five assists. That is what you want from your point guard. Michael Carter-Williams was solid at the spot, but Antetokounmpo has a chance to be special.

Being 6’11” and playing point guard has its advantages for Antetokounmpo. But in order to take full advantage, he has to work on a few things in the offseason. The first thing he has to continue to get better with is his post game. With that type of size at point guard, there is sure to be mismatches across the board. So he should be able to go down in the post when he gets caught with a smaller guard on him. He has to take advantage of those opportunities and make teams pay for guarding him with a small guy. If he improves there, then he can essentially run the Bucks offense out of the post at times, getting open shots for guys like Chris Middleton, who is the Bucks best shooter. Speaking of shooting, Antetokounmpo needs to work on his shooting from distance. With his build and his handles, he can get into the paint very easily. But there will be a time that he will have to knock down the jump shot. If teams began to sag a little more off of him, he has to be able to make them pay. He has improved shooting the jump shot, but he has to continue to get better there to reach his full potential. Of course he can improve at the three-point line (only shooting 21% this year), but the midrange game is where he must be more effective at this point.

Antetokounmpo is something the NBA has not ever seen. A guy with that type of size, skill and vision can wreck the NBA. The scary thing for many is that he can only get better. He is only 21 years old and has yet to reach his peak potential in the NBA. For the Bucks, they now have a guy they can say will be their franchise player. If that was ever in question, there is not one question about that now. This is his team and as he grows in his game, the team will get better and better. The Bucks did not meet expectations this year, but out of that came something special in Antetokounmpo. 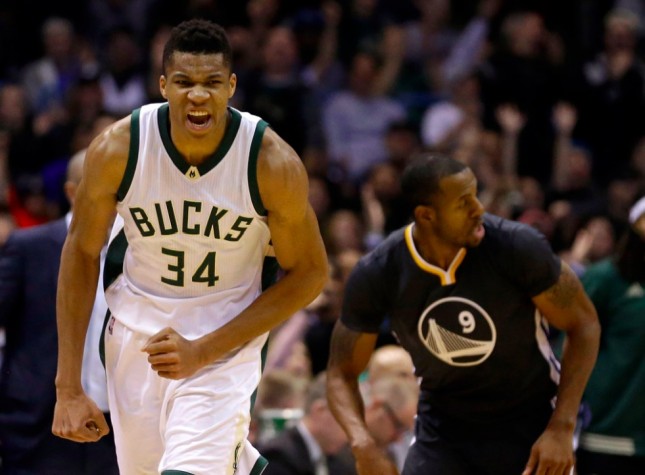 (photo courtesy of The Blaze)