What’s Next For Paul George?

The speculation has been out there for a while when it come to Paul George. The star of the Indianapolis Pacers was eligible for an extension with the Indiana Pacers that could have paid him $177 million over five years. But what was noticed was the stalling in making that decision from George. He definitely was thinking long and hard about that type of commitment since he has been seeing the Pacers get worse and worse around him. It isn't like the team has not tried to do better, but some of the decisions they have made like Monta Ellis and Thaddeus Young have not paid off. With that being said and the team not looking like it was on the upward tick, George has finally made a decision and it is one that Pacers fans will not really want to hear. George informed the team that he will be playing out this season without signing an extension and will be a free agent in the summer of 2018. In addition to George wanting to be a free agent in 2018, it is also being reported that he is wanting to land in Los Angeles with the Lakers next summer (max deal would be a four-year deal worth about $130 million if he signs a max deal). With that being said, new Pacers general manager Kevin Pritchard and the Pacers have a decision to make and it looks like they are fielding calls for George, seeking two first-round picks and a starter in return. Well, one team's name has come up already, but that team does not have all that Indy wants right now.

The Cleveland Cavaliers and Paul George have been talked about for a while now and many see him as a perfect fit with them. Imagine George and LeBron James running the wings and locking down people defensively. That all sounds good, but there is the matter of what the Cavs would have to give up to get George. One name that continually is mentioned with this potential trade is Kevin Love. The thinking is that George would step into Love's spot, making the Cavs a quicker, faster team that can defend well on the perimeter. That all sounds good, but let's think about this for a second. Either Paul George or LeBron James would have to play the power forward position for the Cavaliers all season long. Both are good defenders and it would not be bad for them to play the position for moments in time, but asking them to play that position for the entire season would wear down either of them and would not be good for the Cavs. Also, the Cavs' rebounding numbers would definitely decrease. Another thing that would be missing is some post game. For as much as people clown Love for him shooting three-pointers, people forget that he is the best big man post scorer they have. We know Tristian Thompson cannot score consistently down there, so that would make things even harder on the Cavs offensively. Instead of Love, the Cavs actually should look to move JR Smith and Iman Shumpert to the Pacers, with one of those two being the starter at shooting guard for the Pacers (of course it would really take some convincing to take on either one of those contract honestly, but it is another option besides Love). Then they would be able to slide George to the shooting guard position and keep James at the small forward spot. The only thing that would be missing is the first-round picks. Unfortunately for the Cavs, this is where they would fall short in a potential deal. The Cavs don't have the first-round picks the Pacers want for George right now and that would mean they would have to get another team involved to help facilitate this deal and that could be tough to do.

George to the Cavs, even though there are a lot that want to see it happen, may have some serious hurdles to make happen. Besides, giving up Love or potentially giving up their starting and backup shooting guard, it has to trouble the Cavs that they would be giving up that much for a guy that could essentially be a one-year rental. With LeBron James being a free agent in 2018 as well, that could potentially leave the Cavs without George and James after the summer of 2018, which would be a scary proposition for them. So besides the talk about the Cavs trying to trade for George and the Lakers more than likely waiting it out until 2018 for George's services, no one really knows what teams are interested in taking a shot at the star swingman. While that cloud of mystery still surrounds the Pacers and what they want to do, there is one team that has what they are looking for right now. The Portland Trailblazers were not the same team they were in the 2015-2016 season. They seemingly took a step back and had some trouble scoring outside of their two guards, CJ McCollum and Damian Lillard. Enter Paul George at the small forward position. The talented small forward will give them scoring outside of Lillard and McCollum and he will also give them a defensive stopper to both guys like Kevin Durant. The Trailblazers have the picks that Indianapolis would want, given they have three first-round picks in this year's draft. Attached to those picks, the Blazers can roll out any combination of guys like Evan Turner, Allen Crabbe, Ed Davis, Al-Farouq Aminu, Moe Harkless and Myers Leonard to try and get close with the salary cap number that George would bring to Portland with him. All in all, it would be a very risky move for Portland to do, but who knows? They could be feeling crazy enough to make that type of move.

All in all, the Pacers find themselves in a tough predicament. They have a star player that essentially told them that he does not want to be there with them anymore. The Pacers have to get something done. The question is what do they get done and what is their timetable for making something happen. No one knows those answers right now, but eventually something will happen and George will be sporting another jersey. It should be interesting to see where he stars going forward. 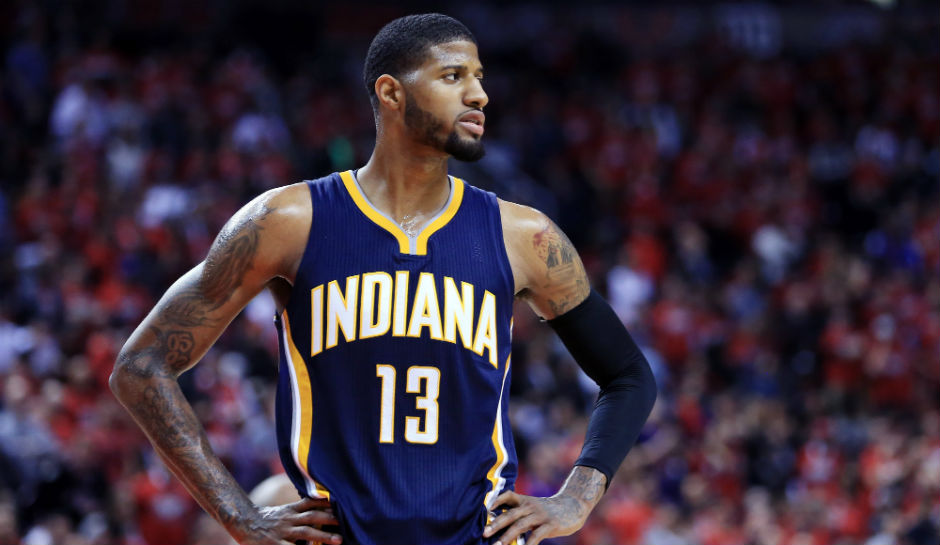