" We knew from the start that things fall apart, intentions shatter." Black Thought uttered those words when he was rapping on the collaboration between The Roots and Erykah Badu. The song called, "You Got Me", was originally slated to feature Jill Scott, but the record company, MCA Records, wanted Badu in there for her profile. The song, which was well-received, won a Grammy for Best Rap Performance By A Duo Or Group in 2000. While the song had success for The Roots and Erykah Badu, that one line in the song tends to point away from The Roots native Philadelphia to the city of Chicago at this point in time. More specifically, this song points to the Chicago Bulls. The team entered the season with high hopes when they added veterans Rajon Rondo and Dwyane Wade to go along with the team's star, Jimmy Butler. The thinking was the Bulls could use the veteran leadership and championship experience of both Rondo and Wade to help get this team back into the playoffs and potentially contend in the East. Well, things have not exactly worked out the way the Bulls thought it would, as the Bulls are further down then many expected and they are fighting for the eighth spot in the NBA's Eastern Conference. But if that was not bad enough, things are getting worse.

The Bulls and their issues started when Rondo was benched unexpectedly for Michael Carter-Williams. At that point, all the Bulls did was replace one non-shooting point guard with a taller, younger non-shooting point guard. Needless to say, it has not made much of an impression on the Bulls roster and the Bulls took him not only out of the starting lineup, but out of the rotation as well. He since is back in the rotation, but is in a backup role. But he clearly was not happy with the decision at all. And if that was not enough, Wade and Butler spoke out after a loss to the Atlanta Hawks on Wednesday where they called out their team to the media, especially the young players. They talked about them not caring about winning enough. That may have been right to say, but they said it to the world and not the people that needed to hear that: their teammates. As a result, Rondo responded via Instagram saying that his vets would not have done that when he was in Boston. Rondo, Butler and Wade were all fined for this mess and Wade and Butler found themselves coming in off the bench. Both performed awful as the Bulls lost yet another game and look bad in doing it. So here we stand with the Bulls fractured in many aspects with no end of the drama in sight.

This whole situation keeps getting worse because the youngsters on this roster apparently don't like it that Wade sits out practices sometimes. Well, at 35 and with all the assortment of injuries he has had over his career, that is to be expected. But did you really think the youngsters were going to take this from Wade in the manner in which it was done? They are taking it as a sign of disrespect and who can blame them? Their leaders took something that was probably locker room discussion and opened it up for the world to see. As far as Butler, he is by far the best player on this team. But the thing he has not learned how to be is a leader. The thought was that Wade would come in and teach him how to lead a team. But unfortunately, he has not taught him much in that area that we have seen. Butler had been talked about last season in regards to his leadership style and pushing his team. At that time, the leadership he displayed was reportedly not liked by his teammates. Fast forward to now and the same thing is going on. Butler has not learned much from the past and eventually time will run out for him to show his teammates that he can lead them. Adding on to his leadership issues is that it is very noticeable that he and head coach Fred Hoiberg are not on the same page. When your best player and the coach are not on the same page, that automatically ruins a team because the rest of the team follows the lead of the supposed leader.

So to recap it all. The Bulls have a veteran that does not practice and is not showing his veteran leadership, a star player who is failing at being a leader, a veteran point guard who calls the veteran that does not practice and the failed leader out about putting stuff out for the public while putting stuff out on Instagram, which is in public place and young players that are mad at their vets and their star. Sounds like a drama that is scripted for primetime television doesn't it? But unfortunately for Chicago, this is the state of the Bulls. Things Fall Apart was an album for The Roots. But for the Bulls, that same phrase means they are coming apart at the seams for the world to see. Well, on to the Next Movement in Chicago, whatever that may be. 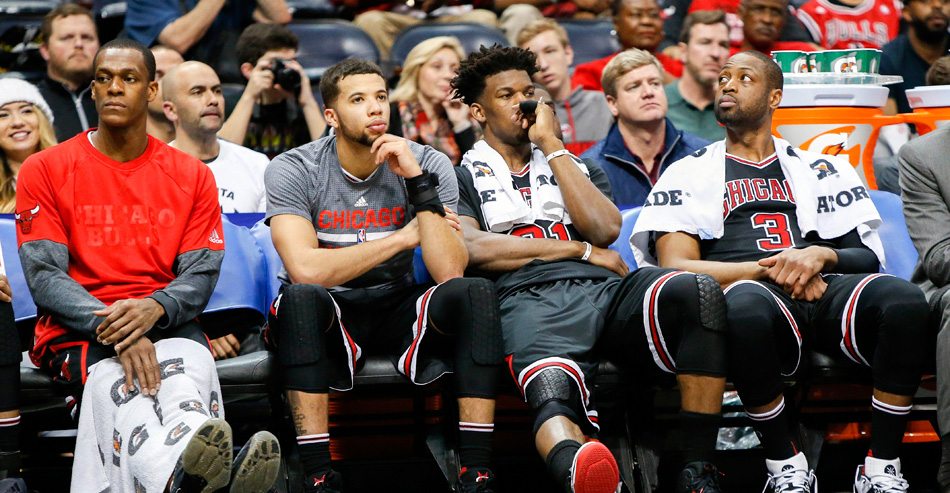