Kevin Durant was one game win away from being in the NBA Finals. The Oklahoma City Thunder were tied with the Golden State Warriors heading into Game 3 of the Western Conference Finals and won both games when they headed back home. Plenty thought it was over for Golden State and their repeat chances at that point. But leave it to Oklahoma City to not complete the task at hand. The Warriors dug deep and came back from a 3-1 deficit to beat the Thunder in Game 7. And just like that, all the optimism for the Thunder to return to the NBA Finals turned into frustration and disbelief. The Thunder's season was over. And along with that, the speculation for Kevin Durant began. Of course, there are many that think he will return to Oklahoma City on a two-year deal with an opt-out clause after one year. But there seems to be a growing thought that he may end up playing for the team that defeated him in the Western Conference Finals. Yes, those same Golden State Warriors are looking to upgrade their team after falling in the same manor that they beat Oklahoma City. And one of their main targets they are trying to lure is Kevin Durant. It all sounds real nice with him coming there and many have said that they would win the title next season if he does. But in studying Durant and his fit with Golden State, this pairing could be one that does not actually work.

The Warriors are very talented offensively. And along with being very talented offensively, the Warriors also like to move the basketball around, creating open shots for everyone out there. Durant added to this team would give them another weapon that can score. After all, he has averaged over 27.4 points per game for his entire career in the NBA. But in viewing things a little bit closer, this would be an odd fit for him at first. If you examine Durant's game, he has been a guy that has had moments of moving the basketball and getting other players on his team involved. But those moments are few and far between. Where the Warriors like to move the ball, Durant can be a ball-stopper, choosing to play heavy isolation basketball instead of keeping it moving and making things easier. Of course Durant is a very talented offensive player. But Golden State does not play isolation basketball and that type of thing is what got them beat in the NBA Finals.  Durant could change his game and began to conform to what the Warriors like to do. But after a certain length of time in the NBA, people are who they are. And just like a zebra doesn't change it's stripes, Durant isn't going to change who he is. He is an isolation player that takes and makes tough shots. it is who he is. So offensively, he would bring more talent but the fit would be interesting.

But the fit would also not be right offensively but defensively as well. Many just speak of the offensive contributions of Durant and that can be an intriguing thing to think about. But defensively, he has not exactly been the most stellar. For his size (Durant is really seven foot tall instead of the 6'9"-6'10" he is listed at), he should be a solid defender. But the problem is he has not been a solid defender for his entire career. Of course he is a better player than Harrison Barnes. But one thing you cannot say is that he is a better defender than Barnes. Durant has the potential to be a better defender and that is without question. But he has been subpar except for some of the defense he played in the Golden State series in the playoffs this year. While many seem to focus on the offense of Golden State, the Warriors have quietly become a very good defensive team. And they have done so while sometimes trying to hide Steph Curry defensively. Just think if they had to hide two defensive players on the court. We know Draymond Green and Klay Thompson are very solid defenders, but can they really cover up for 40% of a Warriors lineup featuring Durant and Curry? That's a lot to put on the plate of two stud defenders and would ultimately make their defense weaker.

Replacing Harrison Barnes with Kevin Durant sounds like a great idea to many. Barnes is the weaker scorer of the two and he is not as mentioned as Durant is. But even with that, Barnes can defend and (when he is focused) can score though the Warriors constant ball movement. Durant cannot really defend very well and he is an isolation basketball player. And if he is to come in, someone will have to take a backseat. It certainly will not be him, but then there is Clay, Steph and Draymond Green to consider here also. It all sounds good to add Durant to this roster, but is he going to go a long way to making the Warriors a physically tougher team? No, he is actually going to help in that aspect. Durant is a great scorer and everyone could use some scoring.  But it just seems to not be a great fit with Durant potentially coming to Golden City. 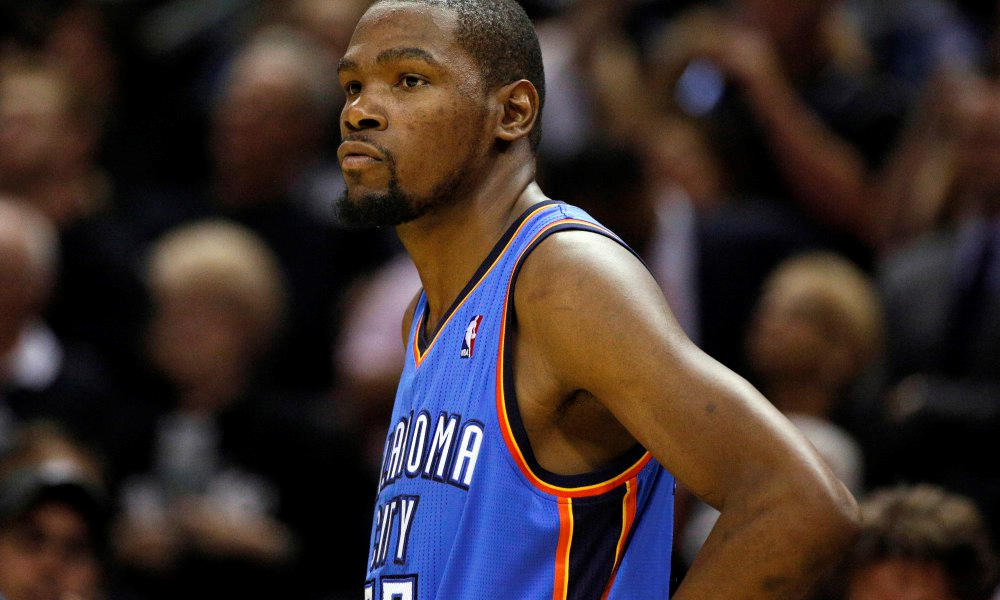