The Golden State Warriors were ready for action. They had arrived back in the NBA Finals to take on the team that beat them last year, coming back from a 3-1 deficit to beat them on their homecourt in Game 7. But instead of them being the same team they were last season, some things changed. Gone was Harrison Barnes as the starting small forward for the Warriors. Replacing him was one of the Top 5 players in the NBA in Kevin Durant. The bench may have taken a hit some, but the addition of Durant overshadowed that potential hit in the "Strength In Numbers" mantra. In adding Durant, the Warriors got arguably the best scorer in the game. But in adding him, there was more that he had to bring. The team was not as deep as previous teams and Durant was going to have to play not only the small forward position but the power forward position in the small ball lineup at times. In doing that, Durant was going to have to be more than just a scorer. Many had not seen the other things that Durant could do or even tried to recognize them. Well, the playoffs have shown those that may not have been paying attention all season that Durant has made a leap towards becoming a more complete player.

One thing many harped on when Durant headed to the Bay Area is his defense. In Oklahoma City, Durant could be seen taking plays off and not exactly giving that max effort that plenty felt that he needed to give. As a result, he was maligned for his defense for most of his career in Oklahoma City. With a change of scenery it seems that Durant has taken the defensive part of his game to the next level. During the season, we saw some glimpses to how good he could be on that end of the court. Well, in the playoffs, he has taken it to another level. Durant is using that seven-foot frame and blocking shots, rebounding and defending at a higher level than he has in his career. The perfect example of that is the effort he gave in Game 2 versus the Cleveland Cavaliers. Kyrie Irving had shook the player who was defending him and was going up for what seemed like a wide-open fadeaway jump shot. But Durant saw Irving open up and peeled off his matchup to help on Irving. The result was Durant being able to block his shot. That type of defensive effort was something that we never really saw in Oklahoma City and has been a constant, especially in the postseason. It may have taken a new team and some time, but Durant has finally started to be known more than just for his offense.

Durant may be known for his offensive abilities, but even those have evolved over his time in Golden State. The things that Durant can do at his size are amazing. Never have we really seen a seven-footer that has the type of handles that he has along with the type of range that he has. But in Oklahoma City, the thing that we also got familiar with in regards to Durant is his isolation basketball game. Ball movement was not something that he was used to and as a result, he and Westbrook would run an offense in Oklahoma City that was explosive but could become stagnant at times also. As a result, those stretches of stagnant play would hurt them, especially when they lost last season in the Western Conference Finals to the Warriors. With Durant joining Golden State, it seems like things are much more easy for him. Besides being surrounded by shooting, he also is moving more without the ball. The ball movement has made things way easier for Durant and he has caught on. Just take a look at the range of shots that he is getting. Sure, he still has taken some contested jump shots like he did in Oklahoma City, but he has been moving within the motion offense beautifully and getting easy attempts. As a result of being in a motion offense where he is learning to move without the ball more, Durant is shooting the best field goal percentage he has shot in his career.

We all know how amazing the Golden State Warriors were before Durant got there. On the other side of the coin, we all know how dangerous Durant was in Oklahoma City. Well, this Durant that we are seeing now is on a different level than any version of him we have ever seen. He is giving max effort on both ends and becoming the guy that some envisioned. Durant and the Warriors are a perfect combination and he is showing that his game has evolved and become even better and that is a scary thing not only for this year but potentially for years to come. Change is definitely good for Kevin Durant. 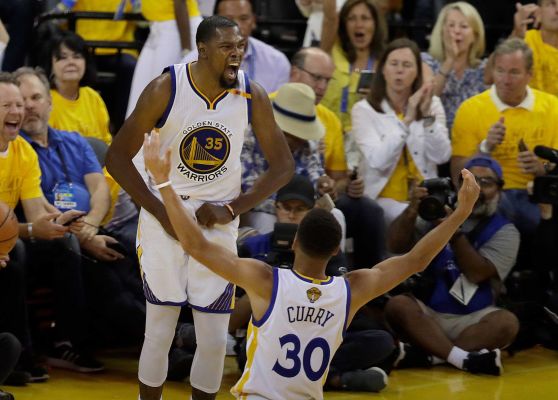