The first two games between Golden State and Oklahoma City had two dramatically different endings. In Game 1, the Thunder came out and did something many thought they could not do: win in Golden State. After that game, some wondered how the Warriors would come out. Well, they came out and blew the doors off the Thunder. Plenty of buzz was around Game 3 on Sunday night. Would the Warriors continue their dominance against Oklahoma City or would the Thunder step up and answer the bell? The Thunder answered that question pretty quickly. Kevin Durant came out aggressively attacking the basket and not settling for long three-pointers. Oklahoma City was getting everyone involved and the team was defending well. When that happens, the team usually wins and with a halftime lead of 72-47, the Thunder were in control and cruising to a victory. Golden State was not themselves at all. They were outmuscled this game and they were having some uncharacteristic turnovers. This was not the Warriors team that we are used to seeing. And one guy that was noticeably absent the entire game was Draymond Green. The versatile forward was 1/9 from the floor with only three assists and had one play that everyone will be talking about for a little while. Green went to the basket tonight and kicked Steven Adams below the belt in a place no man wants to be kicked. Not only will be people be wondering will he play better in Game 4, but some wonder if he will even be allowed by the NBA to play in Game 4.

When it comes to Draymond playing or not in Game 4, the answer should be yes to if he should be allowed to play. Of course this was the second time he has hit Steven Adams below the belt. But when you watch the play, it does not look intentional. In case you missed it, here it is again:

Some think it was intentional because of the history between these two in this series. But if you think about it, this was just his attempt to make sure he got a foul. Many times, we have players in the NBA that try to sell a call. Flailing your legs and arms has long been done. Reggie Miller, now a TNT analyst, was known for his flailing when he played and was shooting the basketball. And in flailing your legs, you have no control of your body. In this instance, Green lost control in the air and the result was a kick to Adams delivered below the belt. He deserved the flagrant, but if he really wanted to hurt him with a kick, he would have stayed on the ground and planted his foot to kick him below the belt. He did not do that, so it will be hard for the NBA to say whether it was a dirty play or just coincidental. It is very likely that he will be playing in Game 4.

As far as Game 4 and his play, obviously Green has to be better. He essentially had no effect on the game. To not have any impact on the game and the score was something that had to feel like an out-of-body experience for Green. So for him to get involved, he has to do a few different things. Draymond is a guy that plays with emotion and leaves it all on the floor. He also is a guy that tries to mentally have an effect on you. Well in this game, he did not have that type of mental affect that he usually does. Green is a guy that plays with an edge that cannot be matched. In this game, he got hit in the mouth by a physical Oklahoma City team and for the first time in a couple years, he did not respond well.  Green was not very vocal at all in Game 3. Usually he is interacting with a referee or talking noise on the court after making a play. He did not make any big plays Sunday night, but he also was very quiet out there on the floor. In order for the Warriors to be who they are, they need the attitude of Green. The chip on his shoulder is what has made him who he is and what will continue to drive him. And for the Warriors, they had better hope the passionate Green shows up instead of the quiet one.

If Draymond is able to be his emotional self, then expect him to be the guy that he usually is on the court. Draymond missed some easy layups tonight along with the rest of the team. In Game 4, don't expect him to miss those like he did. In fact, expect him to hit those and hit more of those wide-open jump shots that he missed. But along with the shooting, his passing was off. He is the leader in assists for the team and is the piece that makes everything work. He only had only three assists Sunday night and four turnovers. Look for him to have at least five assists with maybe one or two turnovers in Game 4. The Warriors need him to be the facilitator and ball mover in their offense first and foremost. And from there, his offense will come. But the biggest difference that has to happen is his defensive presence. Green was non-existent as the Thunder were attacking the paint at will. In Game 4, he has to be a force in there, whether it be blocking shots, getting steals or rebounding. If he is able to be the defensive player that he is, then the Warriors will potentially be able to force Oklahoma City back to the perimeter more. And if they are able to do that, then that gives the Warriors a great chance to win Game 4.

Draymond Green had possibly his worst game of the season Sunday night. That game will be more remembered for his kick to Stephen Adams than his actual play. But along with watching for his suspension, it will be interesting to see how he responds to some personal adversity. Green was not himself in Game 3, but the good thing for him is it is only one game. Provided that he plays in Game 4, he will be more of a force than he was in Game 3 and how he plays will be the barometer of how the Warriors do. He may not be the best player on the Warriors team, but he is definitely the heart of Golden State. And in Game 4, he has to be the guy that helps right their ship. The pressure will be on. The bright lights will be glaring. For Golden State, Draymond Green has to rebound. 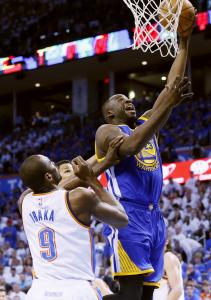