The Toronto Raptors finished off the Indiana Pacers in seven games. The series was tough for them and at times, there had to have been moments that they wondered if they could get it done. But they dug deep and were able to hang on and beat the Pacers in Game 7 by five points, 89-84. At that point, the Raptors felt that sigh of relief. The pressure of not making it out of the first round the last three years had finally been released and they were free to move on. But the team they were facing in the next round was one that has a ton of experience. The Miami Heat themselves escaped a seven game series, eventually taking care of the pesky Charlotte Hornets. The matchup had many wondering which way it could lean. But there is one matchup that could tell how this series ends up.

The Miami Heat have been missing Chris Bosh for most of the season. He had a reoccurrence of the blood clots and is one blood thinners right now. Of course, he has been shooting and things like that during the playoffs and wants to play. But the Heat doctors will not let him play for fear he could get hit and bleed out on the court. So with Bosh out for the season essentially, the Heat made a move that many did not think would happen. Miami moved small forward Luol Deng to power forward and with Joe Johnson joining the team, the Heat went back to playing small ball. And as a result, they got it going during the season and finished strong. And in the first round, that matchup of Deng versus any power forward in Charlotte was one that Deng owned, averaging 19 points and 6.6 rebounds a game. He was the most consistent player on the team during that entire series. And going into the series against the Raptors, Toronto had a decision to make. Do they stay big and keep Patrick Patterson at power forward to defend Deng or downsize to get a quicker body on him?

Well, the decision was made early on that Toronto would go small this series, sliding prized free-agent DeMarre Carroll to the power forward position and inserting rookie Norman Powell into the starting lineup. The insertion of Powell meant the Raptors were going to try and match the Heat. The main reason for doing so had to be because of the effect of Deng against the Hornets. And to Toronto’s credit, they actually slowed down Deng some. Those quickness advantages that Deng had in the series versus the Hornets did not exist. Carroll was able to keep up with Deng every step of the way. He also was able to close out quickly to Deng, taking away some of those open shots Deng had against Charlotte and forcing him to give the basketball up. And even with the defense of Carroll, Deng still had ten points on 4/9 shooting, including 2/2 from three point range. But Carroll was not a slouch himself offensively, he actually matched Deng with ten points and only shot the ball seven times. If it were not for the great efforts of Dwyane Wade and Goran Dragic, the Heat may be down in this series instead of being up one game.

Both Carroll and Deng may not be the starts of the show, but they are key pieces to their respective teams. For Deng, he will be playing more off ball movement than anything in this series. If that is the case, he will need to know where to spot up when Wade or Dragic penetrate the defense. For Carroll, his role may end up being a little different. He can spot up and make shots off penetration, but he can also make plays going to the basket. For the Raptors to win this series, they will need Carroll to outplay Deng on both ends. These two are very underrated as difference-makers and can change the look of the series with the way that they play. The question that’s left is what will become of these two this series? Does Carroll step up to the challenge or does Deng chop Monday’s results up to coincidence instead of an issue? 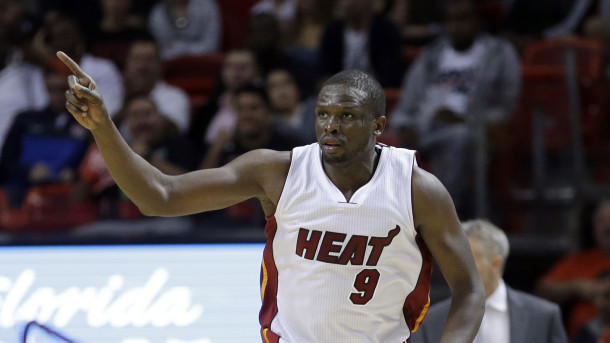