The Sacramento Kings have been a mess for some years now. They tried unsuccessfully at rebuilding and creating a culture year after year. And now there is some discord between management and ownership. Needless to say, it’s a mess there right now. While this mess was festering in Sacramento last season, George Karl stepped in and became the head coach. And that ultimately was a disaster, with him being fired a year and a half into the position. Once Karl was fired, there was plenty speculation as to who the coach would be next. One name mentioned was Charlotte assistant coach Patrick Ewing. But he was passed over again when a particular coach became available. Dave Joerger was seeking permission to speak to other teams for the second time in two years. And as a result, the Memphis Grizzlies decided to let him walk. Well, Sacramento saw him as the perfect fit and moved on him immediately. Joerger and the Kings have agreed on a three-year deal worth $4 million a season with a team option for the fourth year. And just like that, the Kings have their new head coach. But what happens in Sacramento all depends on one player.

DeMarcus Cousins is a very talented player. But we all know that he can be a divisive player as well. He often bumped heads with former head coach George Karl and that helped lead to Karl’s dismissal. And if you listen to the talk around the water cooler, the Kings have been looking around to see what they could get for him. But they may want to stop shopping him because of the coach he currently has. If you watched any Memphis games over the years, you would know that they are known for success. The Grizzlies have been in the playoffs every single year that Joerger has been there. And each year he has overcome the limitations they have had and made them successful. The main thing that Memphis is known for is their grit and grind mantra. Although he was missing this season, center Marc Gasol has been the centerpiece of their team. The 7’1” center can pass and shoot offensively and has been one of the best big men in the NBA. Cousins is every bit as talented as Gasol, virtually able to do anything he wants on the offensive end. And if the Kings are to run a halfcourt offense, then Cousins would be solid under Joerger, provided he can control his temper. The only question mark for the Kings would be who would play the power forward position in that offense. Rudy Gay played it some last season, but that is not the ideal spot for him to play. Quincy Acy played that spot as well, but he is more suited to come in off the bench. And looking at Willie Cauley-Stein, he is not ready to play the power forward position in the NBA. If they go to the style Memphis has, then they could have some success and they could be a more athletic version of the Grizzlies with better shooters.

Memphis was successful with their old school offense that bludgeoned you on the court and bullied you defensively. But the reality is that Dave Joerger never really wanted to play that style of offense. He actually is a coach that wants to pick up the pace and run at teams. In that type of offensive scheme, that could be trouble for Cousins. He fits more in a halfcourt offense that selectively runs with his current stature. Now he could drop some weight and help himself fit that style of offense more. But that is not very likely to happen. So if that fast-paced offense is used, look for the Kings to ship Cousins out of town. If he is shipped out of town, expect some pieces and picks to come back their way, more than likely a power forward and another shooting guard. If Cousins is moved, then look for Gay to take a more prominent role in the offense. Gay has always been talented, but with he and Cousins, it just has not worked as well as they thought. And if you have Rondo feeding him the basketball, the Kings could really be cooking in the fast break. And replacing Cousins at center would be another former Kentucky Wildcat. Willie Cauley-Stein is a very athletic big man that can rock the rim and protect it defensively. With his ability to finish around the rim and block shots, that would help the Kings ignite the fast break and get some easy baskets each game.

The choice on what to do with Cousins is up to the front office and ownership. Whether they hang on to Cousins or not depends on what offers they get. Whether he is there or not in Sacramento also dictates what kind of offense they will run. Will Joerger finally get his fast-paced offense or will Joerger continue to use the formula that he used in Memphis based on his personnel? Only time will tell, but the DeMarcus Cousins watch is on. 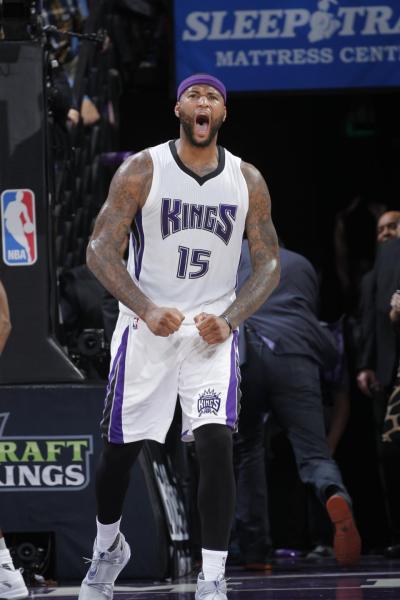