D’Angelo Russell has had a rookie year of ups and downs this year. He started the season as the team’s starting point guard and lost his starting spot. But as time has gone on, he has shown the talent that led many to believe that he was worthy of being the 2nd overall pick in the 2015 NBA Draft. But who would have thought that something that happened off the court would have a lot of people sour on him? A video came out recently that had Russell recording Lakers teammate Nick Young talking about cheating on his fiancé, Australian performer Iggy Azalea. The video has now been seen by everyone, including Azalea. And now that has put tremendous strain on the Lakers’ locker room. No one is condoning what Young said he did in the video at all. In fact, he was wrong for his part of it. But it was not Russell’s job to report what Young was doing on his time. But nonetheless, it has been put out there and Russell is now the black sheep of the Lakers’ locker room.

This issue happened off the court, but it will definitely affect the immediate chemistry of the team. The Lakers have had moments where they have looked good with their young nucleus of Julius Randle, Jordan Clarkson and Russell. When those three have been clicking, the team has played well and even been competitive in games. With the trust issues rising, we saw how bad this team can be. They got beat by 48 points to Utah in a game where they looked listless and uninspired. Trust is a huge thing and if teammates don’t trust you on the court and you are the point guard, then the offense will not be very pretty. The story that teammates have to like each other is a lie, but they do at least have to be able to trust each other on the court. And that seems to be something that is severely damaged at this time. But even beyond his team, other players around the NBA have to be looking at Russell and wondering what he was thinking and if they could trust him when he is around.

Because of this fiasco, there are many thinking that Russell cannot overcome this latest issue. And even to take it a step further, it was mentioned on social media by some that his career could be over. But those statements could not be further from the truth. Russell has a daunting task on his hands, but he definitely can overcome the situation. The best way he can do that is by letting his play do the talking. Of course it will be interesting to see how he and his teammates get along. But in the end, all of the players there are professionals and they will eventually understand that they cannot put their paychecks on the line because of their feelings on Russell. Plenty of players have done some things that have had people, including teammates, upset at them. Who can forget Kobe dry snitching on Shaq when he was going through his rape trial in Colorado? Plenty of people were riding out on Kobe because he said something implying that he should have paid off the woman he was with like Shaq does. Shaq was in a relationship with his now ex-wife Shaunie O'Neal at the time. That situation happened back in 2004 and I’m sure there was some talk about that not only in their locker room but around the league. But Kobe went out and handled his business, bringing the city more championships while displaying legendary play. He played so well that not many even mention that incident back in 2004 where he slipped up talking. Russell has to follow Kobe’s model and be quiet and just play basketball. The more he plays well, the faster people will forget about this incident. It will take some time, but it can eventually happen for him.

There is no doubt that Russell was not thinking when he recorded this video. But it isn’t the end of his career. We have all made mistakes (of course not to this level), but we all have learned from them and moved forward. They will always be with us forever, but we have grown from them. Russell is in a tough situation with the Lakers. The team is not feeling him at all and the fan base along with a ton of sports fans are riding him and calling him everything under the Sun. His best response should be to immerse himself in basketball even more and try to play his way away from this mess he helped create. A long journey starts with a single step. Time to start walking D’Angelo. 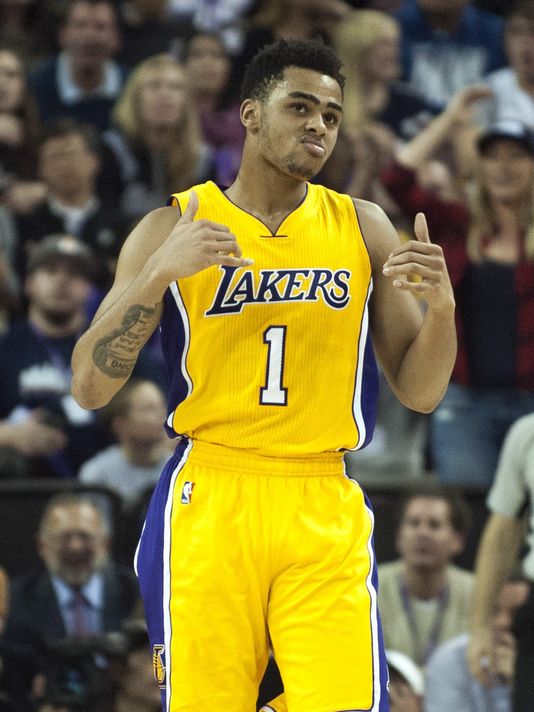