The Golden State Warriors were one win away from winning a title last season. They had shooting, defense and depth that was overwhelming the Cleveland Cavaliers and helped them jump out to a 3-1 series lead in the NBA Finals. At that point, it was all but over for Cleveland in everyone's eyes. But someone forgot to tell Cleveland that the series was supposed to be over. The Warriors never got that fourth win and the Cavs pulled an improbable comeback to win the NBA Title. Of course after that, there were many that had jokes in regards to the blown lead of the Warriors. But the Warriors did not find that too funny. And instead of going into this season with what they had last year, they made some changes. The biggest of those changes was adding a former MVP in Kevin Durant. The talented star swingman was one of the most highly sought after players on the market and many thought he would never end up in Oakland. Well, those who did not were wrong. And now the Warriors have one of the most powerful offensive lineups in the NBA and plenty have them as the favorite to win the NBA title. Another thing that has happened is that Kevin Durant has become the best player on the Warriors team. So with that being said, they would not be as good as they are without him. So could they stand to lose Steph Curry and be still as good?

Well, that question is one that Golden State may have to answer this offseason. As everyone knows, the Warriors star point guard is a free agent at the end of this year. And while many think it is a virtual guarantee that he stays with Golden State, there are never any guarantees. Just ask Cleveland (the first time) with LeBron James and Oklahoma City with Kevin Durant. And with the combination of Curry being a free agent and Durant having the potential to opt out of his contract after this season, there may be some decisions to be made. So with Klay Thompson already locked up in a long contract, which guy would you choose to keep building around? Well, many will obviously say Curry. He has been very special over the last two seasons and change and has been the face of the Golden State Warriors. He has outside the gym range and he also has the championship experience that Durant does not have. But even with all those things that Curry has, let's take a look at the team and how they would look like minus Curry. Let's just say they replace him with a point guard like Jrue Holiday, who will be a free agent next summer also. If that was the case, the Warriors still would have at least two primetime scorers in Klay Thompson and Durant  along with having a point guard that can score (when healthy) and also can defend better than Steph can. That team along with a few other tweaks would be a contender for the West crown.

Now let's take a look at Kevin Durant and his impact. The Durantula was known more as a scorer while in Oklahoma City playing alongside Russell Westbrook. And also with being known as a scorer, he has been known as a guy that cannot finish things off (the Thunder, like the Warriors, lost a 3-1 lead). So with the Warriors, he is hoping to win a title and also be known for more things. The odds for the Warriors winning the title right now are very high along with the odds for the Cavaliers. And along with that, Durant is being seen more for his blocking shots at the rim and rebounding along with assists. Let's just say he wins a title and does all the other things that need to be done for this team to reach that mountaintop again. He will then be highly sought after again by many teams and will have to make a decision. If the Warriors decide to keep him, then they have a Top 5 player at his position signed, sealed and delivered. But if they decide to let him leave, then there is a huge hole left at the small forward position. Along with Durant being a free agent, Andre Iguodala is a free agent next season as well. That leaves no one to play the position for them. Say they kept Curry and ended up having a guy like Danilo Gallinari or Gordon Heyward come to town. While they are the best two free agent small forwards that are out there besides Durant, they don't bring the same things that Durant brings. They can score, but both are not the caliber scorer that Durant is and neither can defend multiple positons or block shots at the rim like Durant. The Warriors would be losing consistent scoring along with a Swiss army knife on the defensive end to go along with Draymond Green. And ultimately, with him gone and Curry there, they would not be as much of a contender as they are now.

Essentially if it comes down to it, the Warriors may have to choose Durant over Curry. And as painful as that sounds, that may be the way it has to go down. After all, there is no loyalty in sports, only the mirage of it. And the Warriors will only be as loyal as their options dictate. The Warriors have a long time before they have to think about this decision (or they may not have to think on it at all), but time waits for no man and time can creep up on you quickly. So we could indeed get an answer to this question in June or July of next year. But until then, it is always good to take a glimpse into the future. 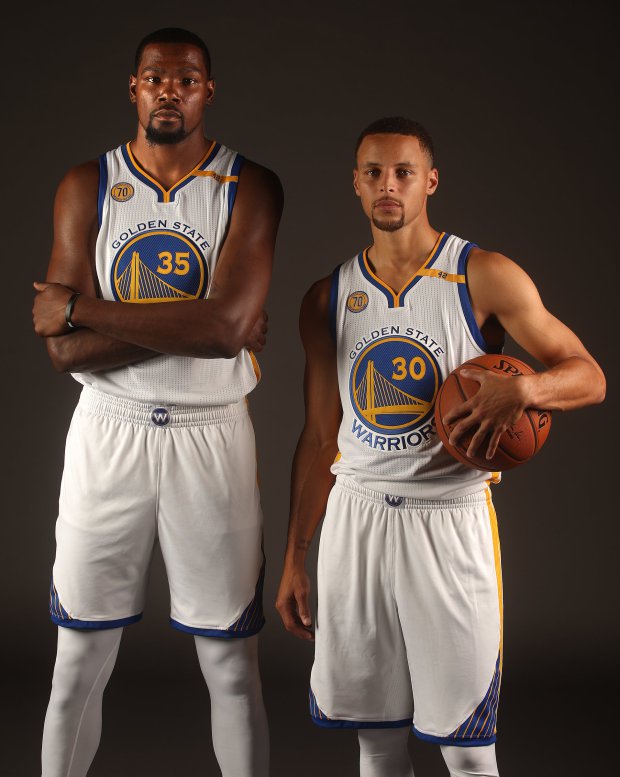