A Change Is Gonna Come?

Sam Cooke is one of the most soulful singers that has ever graced the Earth. Cooke started off as a gospel singer earlier in his career. But in 1956, Cooke would have crossover success. The song that would lead him there, "Lovable", was actually released under a fake name, Dale Cook, to allow him to release the song without any backlash or anyone knowing who he was. But of course everyone recognized his distinct voice and sound and from there, he embarked on a secular career. Songs like "You Send Me", "Cupid" and "Chain Gang" were just a few of the major hits that Cooke had during his unfortunately short career. But one of his most memorable songs that he had was "A Change Gone Come". That song, which was released back in December of 1964, is still one that is powerful to this day. The song has been featured in multiple movies and it still has the same powerful feelings associated with it as when it first came out. Much like Cooke, Jerry West is looking for a change. Everyone has known him for all these years as "The Logo". But West feels that it is time for a change at this point, saying that he wishes the NBA would put something else there. Well, that probably is not happening anytime soon, but here are a few suggestions that could be used. 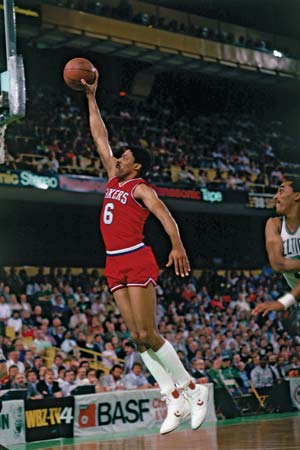 Many speak of Michael Jordan as the greatest player ever and what his era meant to them. But let's not forget about the era that Julius Irving had. He was the first one to dunk from the free throw line and have everyone recognize it and he took the city of Philadelphia by storm when he was a member of the Philadelphia 76ers. Irving could make you look bad when he attacked the rim and one memorable guy he made look bad was Los Angeles Lakers guard/forward Michael Cooper. Irving would get a steal and take it the length of the court. As he was approaching the rim, Cooper got in the path. Well, needless to say, it was smart for him not to jump at that one and let Irving go. The result of that dunk by Irving was a stylistic finish where he rocked the cradle to sleep as he finished with a bang. That dunk is still one that many remember and that many talk about. So why not take that pose of him rocking the cradle and make that the new logo? Oh and if you have no idea what dunk I am talking about, check out the link here. 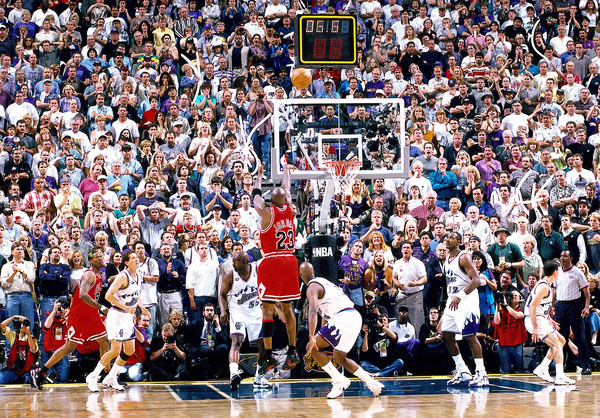 Michael Jordan is iconic. He has not played in almost 15 years, still he is revered among plenty that have watched him play the game. When he first came in, he was known as a skywalker and would dunk on anything moving towards the rim. But as his career went on, Jordan would develop a jump shot that would benefit him as his career went on. That midrange jump shot would come in greatly handy when Jordan was pursuing his sixth championship ring. The battle was intense as Karl Malone, John Stockton and crew were bringing it to the Bulls. Being down three points with a little over 40 seconds left, Jordan drove the rim and hit a layup, cutting the lead to one point. On the defensive end, Jordan would again make a play, coming over to strip Karl Malone of the basketball while Dennis Rodman was defending him. After that, pure magic would happen. Jordan would come down the court, cross over Bryon Russell(some still will talk about the potential push off on Jordan) . The ball would hit nothing but the bottom of the net, as the Bulls would take a lead they would never relinquish on the way to winning their sixth title. That lasting image was supposed to be the image that many remembered on his way to his second retirement. Of course he would come back once again, but it definitely was not the same Jordan. But that iconic picture of Jordan holding his follow-through on that fantastic finish will never be forgotten and would be the perfect selection for the logo. If you don't remember that finish, then click here. 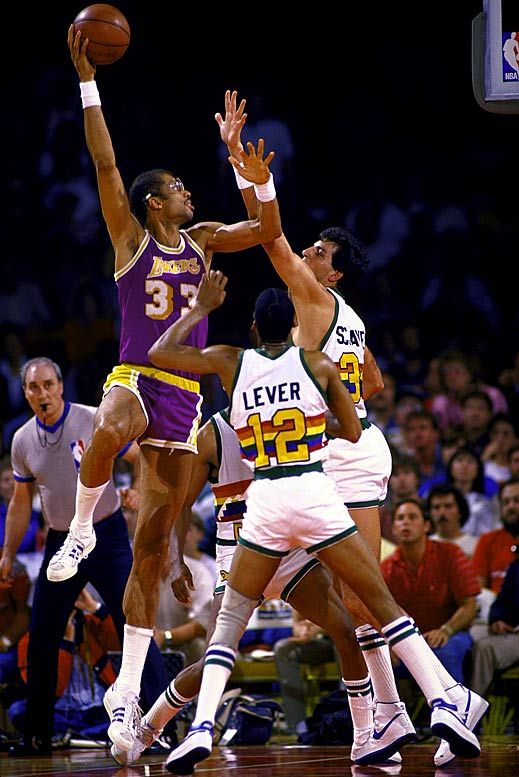 Kareem Abdul-Jabbar with the sky hook

Kareem Abdul-Jabbar was a guy that seemingly played forever. He entered the game back in 1969 under the name Lew Alcindor. But after a couple years in the NBA, he changed his name to what we all know him to be now based on his Muslim beliefs. His name may have changed, but his game was still as dominant as ever. The bigtime center averaged 24.6 points per game for his career and he is still the leading scorer in NBA history. But even with that, many still remember him for one move and one move alone. Abdul-Jabbar used to dominate opposing centers with a move that was virtually unblockable. The skyhook was created back when Abdul-Jabbar was in fifth grade while he was doing a drill in practice. This move was not a huge one for him to start his career. But as he got older, it became his signature move. And he would ride that one all the way until his last season. That move and that pose would be something that all would remember and although he is not the most popular player, everyone remembers that iconic shot.

When Allen Iverson first came into the NBA, plenty were not sure what to make of him. Was he going to be a point guard or was he going to be a small shooting guard. Well, we got that answer pretty quick as they tried to play him at point guard to no avail. With the acquisition of point guard Eric Snow, the 76ers were eventually able to move him to shooting guard and that is where the magic between he and Philly began to start. Each year the 76ers got better and better with Iverson there until they reached his MVP season. That year he took the 76ers on his back as they went all the way to the NBA Finals. Of course they got handled rather easily by the Los Angeles Lakers, but they never would have gotten there without the superhuman efforts of Iverson. But along with his incredible scoring prowess, heart and ability to score for his size, Iverson was also known for one particular move. He showed that move to Michael Jordan very early in his career. The killer crossover he gave Michael Jordan left him grasping for air. That move, along with his signature style, would endear Iverson to many NBA fans going into a new era of basketball. That signature crossover would be a perfect fit for the NBA logo and would take the NBA into a new era as well. If you don't remember that crossover, then check this reminder out here.

If Jerry wants change, then these logos would be fantastic to see. Of course there will be plenty that have other ideas as to what logo they would want to see. But these four moments in time will not ever be forgotten and these four players will not be forgotten either. People may not like it, but change is the only constant in life. Whether we see it with the NBA logo is yet to be determined though.