The Cleveland Cavaliers: Defense Is Optional

The Cleveland Cavaliers were picked to come out of the NBA's Eastern Conference before the season started. The thinking was even with Kyrie gone, the Cavs were deeper and would be able to round into shape enough and have more than the Celtics or any other team in the East. They started the season rough then hit a winning streak and everyone thought things were rounding into shape. Well, things have gone back to the bad side again as the Cavs have lost six of their last seven and they look listless on the floor. As it currently stands, they not only look like a team that cannot win the championship but they look bad enough that the East could be up for grabs. There are those that are reveling in their demise while there are others that are trying to figure out what exactly happened to this team. They do have some new pieces and have had some injuries, but are they really this bad? They probably aren't but one thing that has hindered them all season and continues to hurt them is their defense. And if it does not get better, then they will continue to take loss after loss.

Everyone has their keys to defense and what they believe will make you successful, but the one thing that is imperative defensively is communication. When you take on a pick-and-roll and are in a help position, both players have to know what the other is doing and the best way to do that is to talk. For the Cleveland Cavaliers, it seems like no one is talking on the defensive end. A prime example is on a simple pick-and-roll the Spurs were running in their most recent loss, point guard Isaiah Thomas was getting screened by Jeff Green's man, Thomas took the screen and then fought over it. At that point, Green assumed that Thomas was going to continue to come through and take his man back. Well, Thomas thought Green was going to take his man and they were going to switch. The result was a layup for the Spurs and Thomas and Green looking at each other with confused looks on their faces. Thomas and Green were in this example, but this has been a symptom of their defensive woes all season long and it isn't just them, but everyone on the team. No one talks and a quiet defense is not a good defense, especially when you are trying to learn one another.

Along with the quiet defense, the Cavs other issue is help defense. Back all the way to little league, they teach you defensively to help your teammates. Plenty that have played basketball have done the shell drill to show you what positions you need to be in to help your teammate. Well, it seems like the Cavaliers may have to go back to that. Plenty of times, you can see players that are so worried about their man that they allow the offensive player to drive directly to the rim for a layup or dunk. Everyone from LeBron James to Jae Crowder has done it and it is totally unacceptable for a team that is trying to go back to the NBA Finals to do. Their positioning defensively, or lack thereof, reeks of selfish basketball on that end of the court. No one is selling out to help their teammate like you're supposed to. After all, it is a team game and not an individual sport. Maybe they don't get that you can help and then you will receive help or something, but they are awful at that and it gives opponents that play them the continued version of the layup line teams do to warmup before the game.

The Cavs have issues all over the place from the locker room to both ends of the court, but they aren't things that are not fixable. Even with how bad they are playing, they are still third in the Eastern Conference and are a good hot streak away from taking over the East again. With that being said, communication and help defense has to get better along with the will to want to play defense. LeBron is the leader and he needs to set the example. Gone need to be the lackadaisical trot back to the defensive end when you thought you were fouled. Gone need to be the over-rotations and running around like a chicken with your head cut off. What needs to come back is the positional defense that he played when he was in Miami. The help defense that he has been capable of in his career. If the leader takes the reigns and shows the way, the rest will follow. We all know they don't have a shot-blocker, but no way they should be this bad offensively. There is no switch to turn on when it comes to that in. Either you have the desire to do it or you don't. Cleveland, sometime you are going to have to answer on that end of the floor unless this is what you are going to answer with. 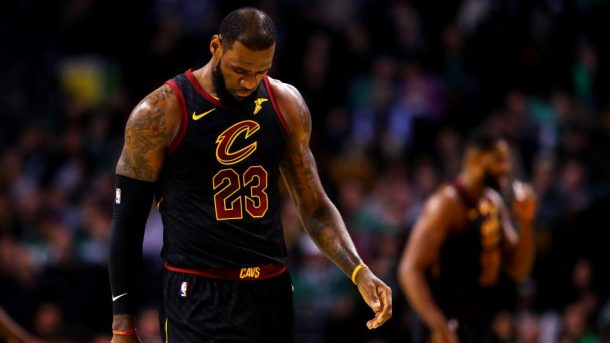