It May Be Time For Chris Bosh To Hang It Up

Chris Bosh was happy to be back to start the 2015-2016 season. He had gotten over his blood clots in his lungs and had returned to help Miami Heat to try and win another title. This season, he and Dwyane Wade would have a more solid team than the year before. Their team was so deep that many thought they would be able to challenge his former teammate, LeBron James, and his Cleveland Cavaliers. And at the beginning of the season, you could see the potential this season had. With youngster Hassan With Bosh sliding to the power forward position, the Heat were bigger and still yet versatile. But around the All-Star break, Bosh began to feel some soreness in his leg. And after being checked out, it was found out that he has blood clots yet again. And because of the blood clots, he would probably be out for the rest of the year a second straight season. Bosh initially was going to try to come back this year, but he was advised by doctors to shut it down while he goes through taking the medicines he is supposed to take to dissolve the clots. So instead of being out there helping his team play and win, Bosh has turned into a cheerleader for his team, trying to help will them to win.

As far as the Heat go, they do have some options to replace Bosh. One they have been using more frequently is playing small forward Luol Deng at power forward. The veteran wing player out of Duke has been solid for the Heat this season. But he has not given them that spectacular play that we are used to seeing from Bosh. Another option is to go with power forward Josh McRoberts. So far, his play has not justified him even stepping into the starting lineup. He barely gets it going off the bench actually these days. But for him, there is still some time for him to turn it around. And the other option they have is playing Justise Winslow play the power forward position, which has not been that bad for them. The overall look of this team without Bosh has been a little uneven at times. Whiteside has been showing up consistently of the bench these days, Joe Johnson has been a solid signing so far and Wade will continue to be Wade. But in the big game and big situations, you want your best players to be ready. Bosh will not be, so the onus falls on Wade to be special. And we all know the history he has of being injured. There will be no LeBron to carry them in stretches like he did when he was with the Heat. And without Bosh around, the team will be operating at less than full strength.

The Heat will feel the hurt, but so will Chris Bosh. Along with missing extended time for the second year in a row, Bosh has other concerns other than on the court. These blood clots have come back and have him taking the same medicines against. That may sound ok to you that he received what he needed to treat those clots, but it just seems they happen frequently for him. And it is because of the multiple times having them, he may want to start considering calling it a career. Blood clots are nothing to play with. They can rush from your extremities to anywhere else in your body fairly quickly and can start simply by you bumping your body against something. He cannot avoid the contract that he faces on the court, so he may as well start working on his career after basketball. Bosh, if he were to retire right now, would be a good candidate for the Basketball Hall Of Fame and would probably make it. But the accolades he would receive after his career are neither here nor there. His life is what could be at stake. And these blood clots are serious business.

Bosh and the Heat may have to sit down and talk about his health after this season. The team is still solid without him, but not good enough to win the title. And for Bosh personally, he has to think of his health and his family at this time. He may love to play the game, but he has to love his life and his family more. It will not be easy for him to make this decision because of his love for the game. But unfortunately, he will have to. When blood clots happen two years in a row, it means you did not give yourself enough time the first time to recover and that they could happen easier going forward. 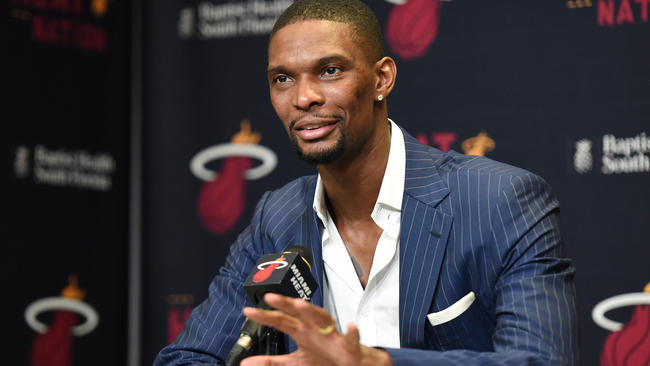 (photo courtesy of the Sun-Sentinel)