The Charlotte Hornets Are Buzzing

Going into the series, there were not many that gave the Charlotte Hornets a chance against the Miami Heat. And after the first two games, the Hornets were down two games and looking exactly how some expected them to look. They were getting beat to the rim, not hitting shots and could not get it figured out as a team. But going home, the Hornets found something. And that two game deficit seems so far away. The Hornets went to Miami Wednesday night and were able to fight back for a 90-88 win. The Heat looked a little shocked. Combine that with the frustration that they exhibited, and all the pressure is squarely on the shoulders of the Heat and their team. But as for the Charlotte Hornets, they have shown everyone that they have heart. And with that heart, they have decidedly flipped the tables on the Heat. And with Game 6 Friday in Charlotte, the Hornets have a good chance to slam the door shut on Miami’s season. A few things have swayed this series in Charlotte’s favor.

One big change has been the addition of Al Jefferson into the starting lineup. The veteran big man was making his way back from knee surgery, so the Hornets kept him coming off the bench. But in Game 2, Jefferson showed that he could give the Hornets someone that could threaten Heat center Hassan Whiteside in the paint by scoring 25 points. And in Game 3, Charlotte coach Steve Clifford decided to start Jefferson and sit Cody Zeller. That change led to Whiteside having to play individual defense from the start of the game. And in Game 3, that is when the momentum started to change. Whiteside got in early foul trouble as a result of Al’s post moves and aggressiveness and it seems like he has not been the same Whiteside ever since. Al may not be the leading scorer anymore, but he is a guy that commands attention and he definitely has all of Whiteside’s attention right now.

But Al Jefferson’s insertion is not the only change that happened. In Game 2, Nicolas Batum injured his ankle. And with that, the Hornets made an adjustment and put Frank Kaminsky in the starting lineup, sliding Marvin Williams to small forward. But when they went to their bench, that is when the real adjustment was made. When Jeremy Lin would come in, they would pair him with point guard Kemba Walker along with sliding shooting guard Courtney Lee to the small forward position. That lineup gave Charlotte more quickness on the floor. And along with the quickness, Charlotte coach Steve Clifford knew he could get away with that lineup because of who Miami had on the court. Miami has two rookies that are part of their rotation, Josh Richardson and guard/forward Justise Winslow. Both are athletic and very good defensively, but they both have issues shooting the basketball. With those two out there with Wade most of the time, you have a team that lacks guards that scare you from beyond the three-point line. So when Charlotte is on defense with the smaller lineup, they force deeper shots, which is not Miami’s strong suit. And on the offensive end, Lin, Walker and Courtney Lee were able to attack Miami in the paint. All their attempts may not have counted for them, but they were continually putting pressure on the Heat defense. And in turn, the Hornets had earned the respect of their speed. And that opened up the three-point line for the Hornets Wednesday night, which they hit thirteen of them.

One big player for the Hornets against the Heat has been Courtney Lee. The Hornets traded for him at the trade deadline to give them some better shooting and some more experience in their backcourt. Well, he has definitely given them some experience. But he has had two clutch moments down the stretch the last two games, leading to wins for the Hornets. In the Game 4, the Hornets were trying to hold off the Miami Heat after they made a charge back at them. A shot went up and there were plenty going after the rebound. But Lee was the one that was able to secure it, allowing more time to run off the clock as a result of another Charlotte possession. And he would go on to get another big offensive rebound on the way to the Hornets winning their second game in the series and tying it up. But in Game 5, he stepped up and made it happen his traditional way. He was struggling all game hitting the three. But with 28 seconds left, Lee got another offensive rebound and he then proceeded to drill a three-pointer that would put the Hornets up for good. The acquisition of Lee was looked at as an afterthought to many, but he has been invaluable to the Hornets down the stretch of the last two games.

The Hornets are in prime position to close this series out Friday night. The Hive will be buzzing and energy will be at an all-time high throughout the arena. They will be facing a Heat team that does not want to get home and will have their backs against the wall. For Charlotte, they have to continue to do what they can and continue to buy into everything that head coach Steve Clifford has done to put them in position to win. Charlotte is definitely playing well and there is no denying that. And their play has shocked a lot of people. 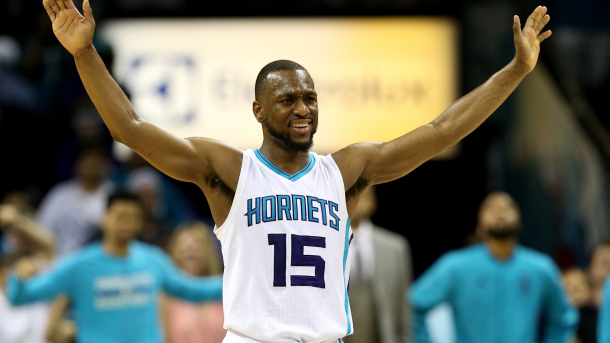